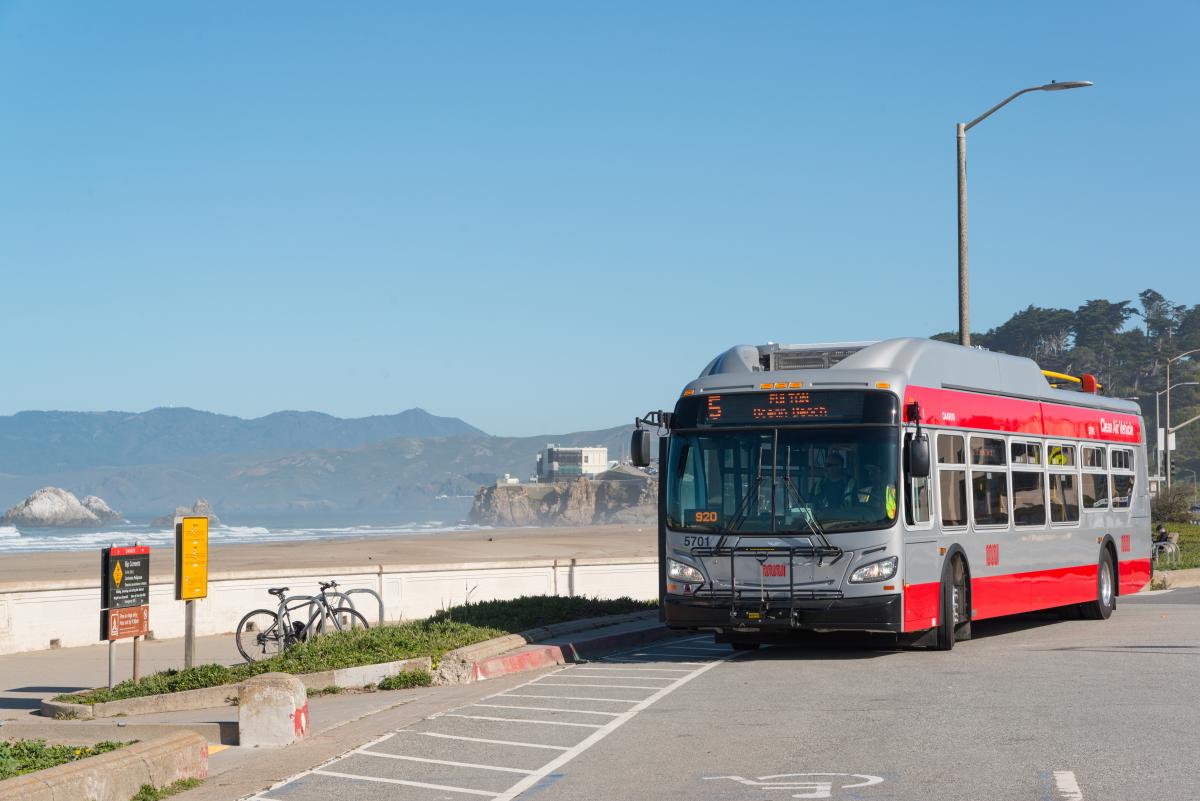 Take your bike on Muni using the racks on the front of buses to access bike rides on the Great Highway, through Golden Gate Park and across the Golden Gate Bridge.

Thousands of riders are expected to hop on a bike in May for National Bike Month and Bike to Wherever Day on Friday, May 20. For people new to bicycling in San Francisco, using Muni buses to avoid our famous hills and reduce overall trip distances is a great way to get to iconic bike rides and scenic parks.

All Muni buses have bike racks on their front that can hold two or three bikes (only folding bicycles are allowed on Muni’s Metro trains and historic streetcars). Using the bike racks on Muni buses to transport your bike is easy! And, if you have questions while you are doing it, you can always ask the operator, who can assist you. Those looking to bicycle in parks, along the Great Highway, through Golden Gate Park or across the Golden Gate Bridge can simply hop on Muni buses with their bikes—or take Muni to a bikeshare bike—to experience these iconic rides.

Along the Great Highway

There may be nothing more spectacular than riding a bicycle at the edge of the Pacific Ocean. Each week the Great Highway temporarily becomes a great bike ride Fridays at noon until Mondays at 6 a.m. when the roadway is closed to private automobiles for the two miles between Lincoln Boulevard and Sloat Avenue. Hop on the 5 Fulton, 5R Fulton Rapid, 7 Haight/Noriega, 18 46th Avenue, 38 Geary, 38R Geary Rapid or 48 Quintara/24th Street to access the 17-acre park and its unrivaled scenic public space.

Families shouldn’t miss the opportunity to pedal the along the 3.1 mile Promenade through Golden Gate Park that was recently made permanently car-free. Adults and children alike have learned how to ride a bike in Golden Gate Park on JFK between Stanyan Street and Transverse Avenue. From there you can explore all Golden Gate Park has to offer from the Conservatory of Flowers to the Japanese Tea Gardens (recently made free to all San Francisco residents), watch roller skaters at the 6th Avenue Skate Park or roll over to Stow Lake to check out the nesting herons.

One of our favorite Muni facts is that 70% of San Franciscans live within a 15-minute walk of a transfer-free Muni ride on one of our many buses serving Golden Gate Park including 18 46th Avenue, 29 Sunset, 5 Fulton, 5R Fulton Rapid, 7 Haight/Noriega, 28 19th Avenue, 33 Ashbury/18th Street,  43 Masonic and the 44 O’Shaughnessy.

Over the Golden Gate Bridge to Sausalito Ferry