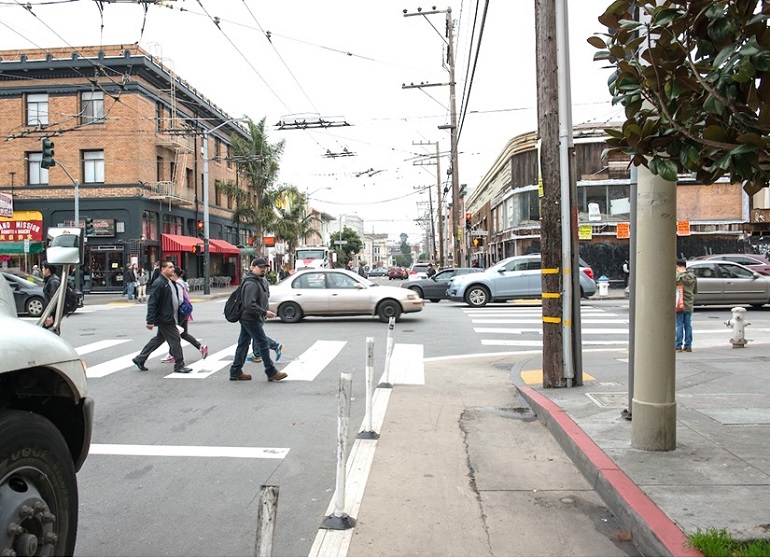 A painted safety zone at Mission and 18th streets.

Painted safety zones are the khaki-colored painted areas, flanked by flexible white posts, which wrap around a growing number of sidewalk corners in San Francisco on streets like Polk and 2nd.

Painted safety zones are a relatively cheap and quick measure to make pedestrians safer. While that may seem intuitive, we put the theory to the test by collecting safety data at eight locations (listed below) before and after they were installed.

Here are our three key findings on the effects of painted safety zones:

1. More motorists turned further from the curb, at safer distances from people on sidewalks.

The number of vehicles turning within six feet of the curb decreased by an average of 35 percent after painted safety zones were implemented.

The number of drivers who “fully yielded” to pedestrians increased by an average of 25 percent after painted safety zones were installed.

What does “fully yielded” mean? In our study, we created three categories for how much space motorists gave to pedestrians:

On average, turning speeds decreased by up to 55 percent. This is based on turning speeds recorded for 100 vehicles, using a radar gun, at a site where a painted safety zone was installed.

These findings were based on studies we conducted at these eight locations:

This initial data is important. It shows that painted safety zones, which are new to San Francisco, can be nimble but effective measures to reduce driving speeds and traffic injuries on our streets.

Speed is the strongest factor in whether people will be seriously injured or killed when hit by a car. On average, someone hit by a vehicle traveling at 40 miles per hour has a 50 percent chance of dying, compared to only 10 percent at 25 mph.

Curbing speeds will require every tool at our disposal. That’s why we’re exploring the efficacy of new tools in pursuit of Vision Zero – our goal to eliminate all traffic deaths in San Francisco.