This Weekend: The Twin Peaks Tunnel and the K-Ingleside Turn 100

Events: This weekend will feature the combined centennial celebration of the Twin Peaks Tunnel and K Ingleside Line, the Kaiser Permanente Half Marathon and the San Francisco Independent Film Festival at the historic Roxie Theater in the Mission. Read more about these events below. 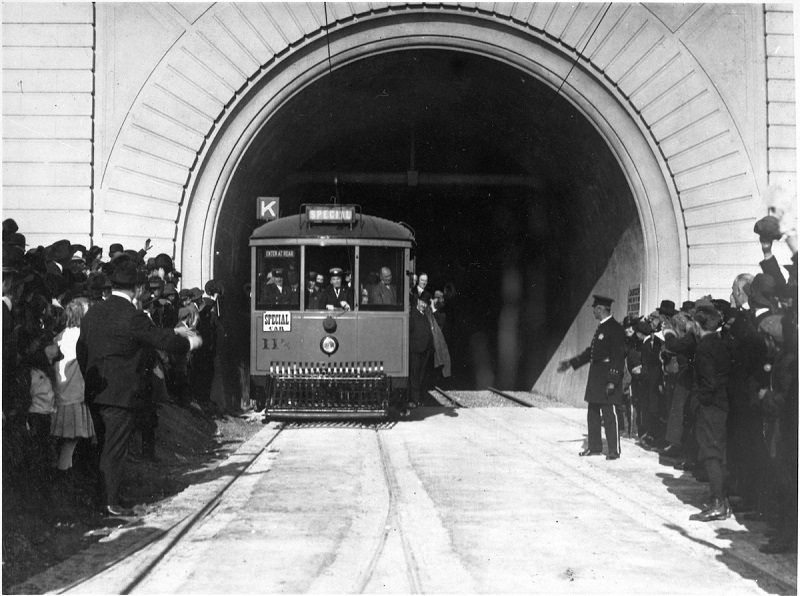 Mayor James Rolph at the controls of Streetcar 117 on the K Line as it emerges from West Portal on the opening day of the Twin Peaks Tunnel. Photo: SFMTA Archive

On Saturday, February 3, Twin Peaks Tunnel and the K Ingleside line will celebrate 100 years of Muni service. To kick-off the centennial festivities, we have partnered with the West Portal Branch Library to host a photo exhibit of the tunnel in its early years and show a century-old film documenting the tunnel’s construction and first day of service. The Market Street Railway will conduct a short, free walking tour spotlighting the tunnel's history. The tour will begin outside the library at 3pm. SFMTA staff and volunteers will also be on hand, giving away handy K-Ingleside canvas tote bags, but don't wait too long! We will be handing out just 100 bags -- 100 bags for 100 years of service.

How to Get There on Muni: Riders may, of course, take the K Ingleside Line to West Portal Station. The L Taraval and M Ocean View Metro lines will also take riders to the celebration, as well as the 48 Quintara/24th St. and 57 Parkmerced routes.

Kaiser Permanente 5K and Half Marathon

Selected as Road Race of the Year by the Road Runners of America, the Kaiser Permanente San Francisco Half Marathon returns to Golden Gate Park this Sunday for its 35th year. Those seeking something of a shorter jog may sign up for the 5K that will begin ten minutes earlier and take runners 3.1 miles through the park. Both races will conclude within one block of each other in the southwest end of the park where there will be an awards ceremony, free massages, food sampling and more.

How to Get There on Muni: The 5 Fulton, 28 19th Avenue, 31 Balboa or 44 O'Shaughnessy routes will take race participants close to the starting line.

Muni Service Notes: The 18 46th Avenue, 23 Monterey, 33 Ashbury/18th St., 43 Masonic and 44 O'Shaughnessy routes will have reroutes in place and may experience some crowding and minor delays due to increased ridership.

Celebrating its 20th year, the San Francisco Independent Film Festival is back at the Roxie Theater in the Mission beginning this Friday at 7 PM and continuing each night until February 15th. This year's festival will present 33 new feature films and 51 new short films while also looking back on its 20-year history with a retrospective series consisting of one film chosen to represent each year of the festival's past. Included in the price of an opening night ticket to the event is an open bar and pizza from Paxti's, so be sure to get yours soon!