Year-End Review of History Uncovered in 2021

As the year comes to an end, we are excited to present a selection of historic photos that were preserved in the SFMTA Photo Archive this year. Archive staff have been scanning and cataloguing archival Muni photos that date back 100+ years for over a decade now. Read more about our work in the 10 year milestone blog from 2018.

The images below are a set of richly colored slides, some of which were originally used in presentations by Muni staff in the 1970s.  These photos have a wide range of subject matter from everyday street activity to scenic vistas, project documentation and important Muni milestones. 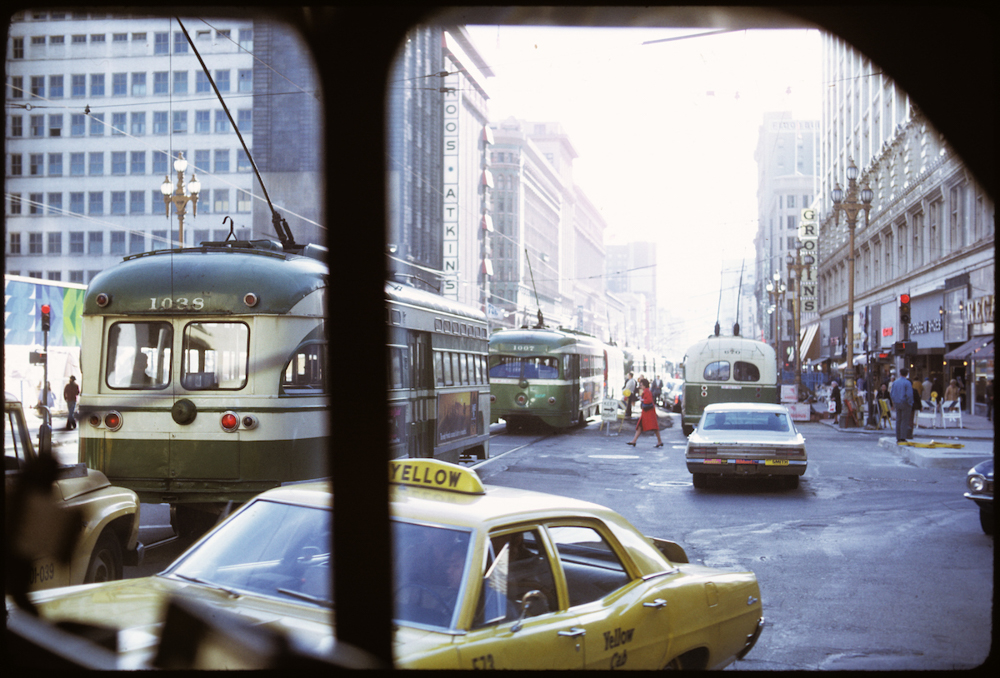 A typical day in the life of a Muni Operator.  This shot was taken near Market and 5th Streets in the early 1970s 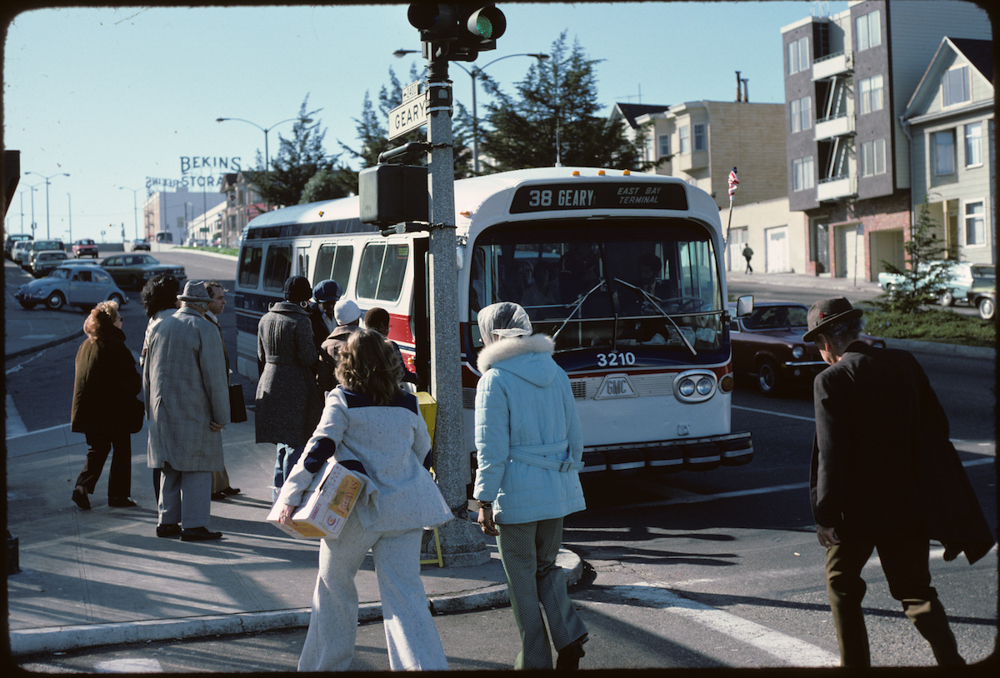 Here, customers board a 38 Geary bus painted for the 1976 Bicentennial in a striking red, white, and blue paint job. 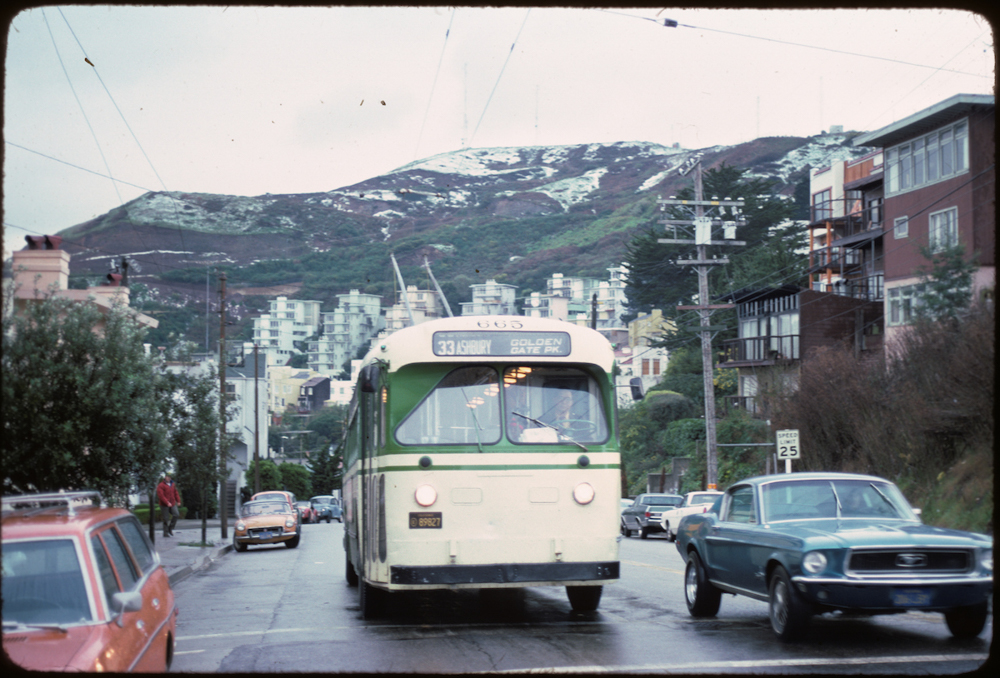 A rare snowfall is captured blanketing parts of Twin Peaks in this February 1976 photo. 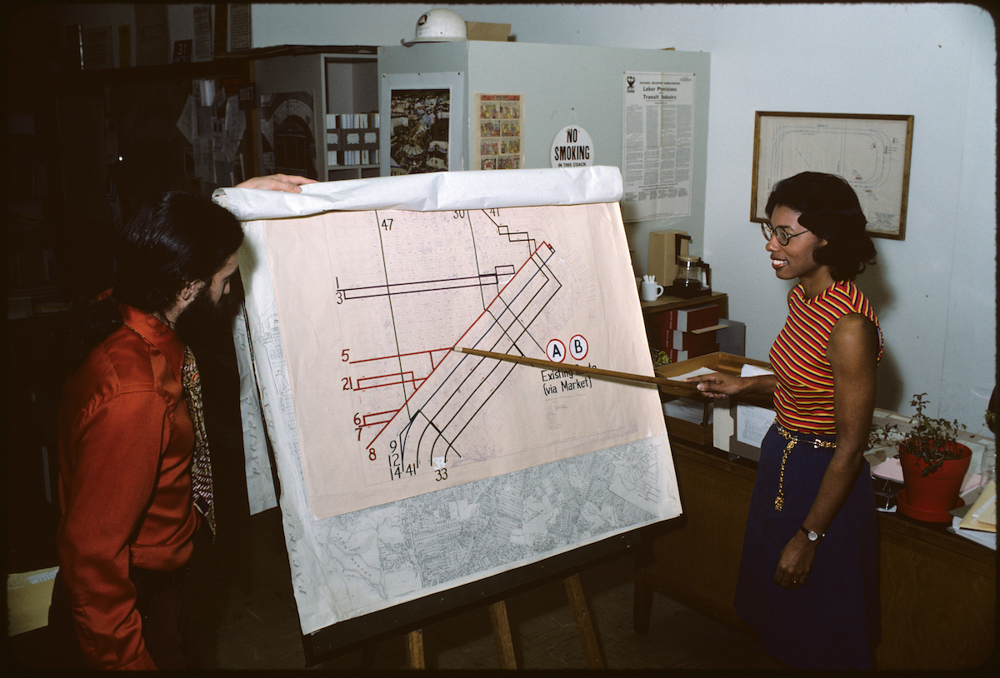 This shot gives a peek inside the operations of Muni, showing Planning Dept. staff reviewing a map of bus lines. 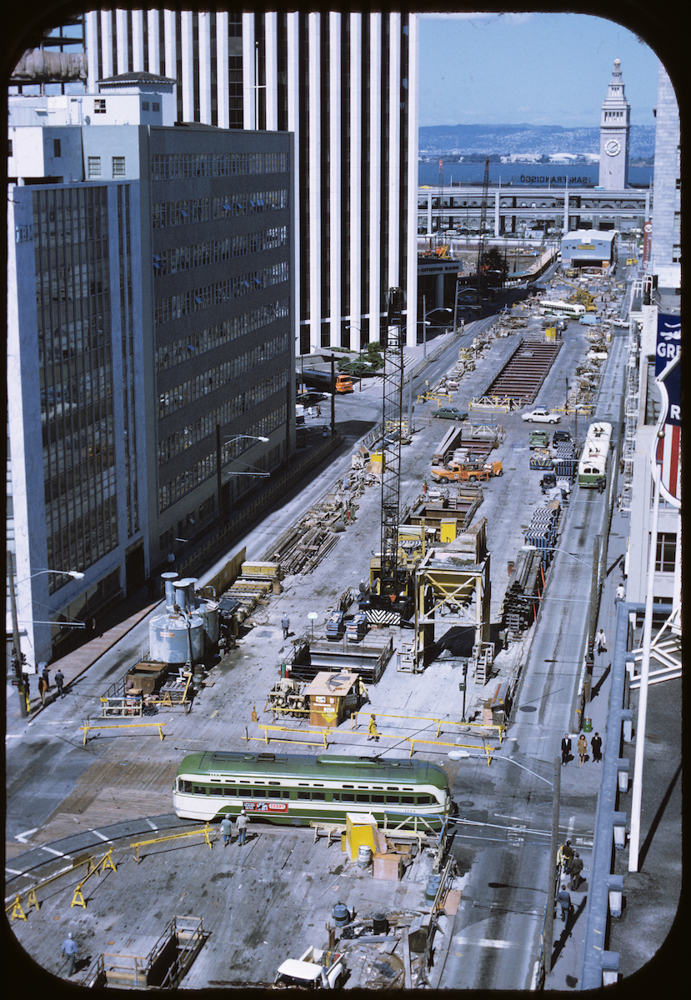 In addition to the color slides, Archive staff performed selective scanning of photos from the 1970s and 80s this year. These photos bring more recent history to view and shed light on life in the city during this time. 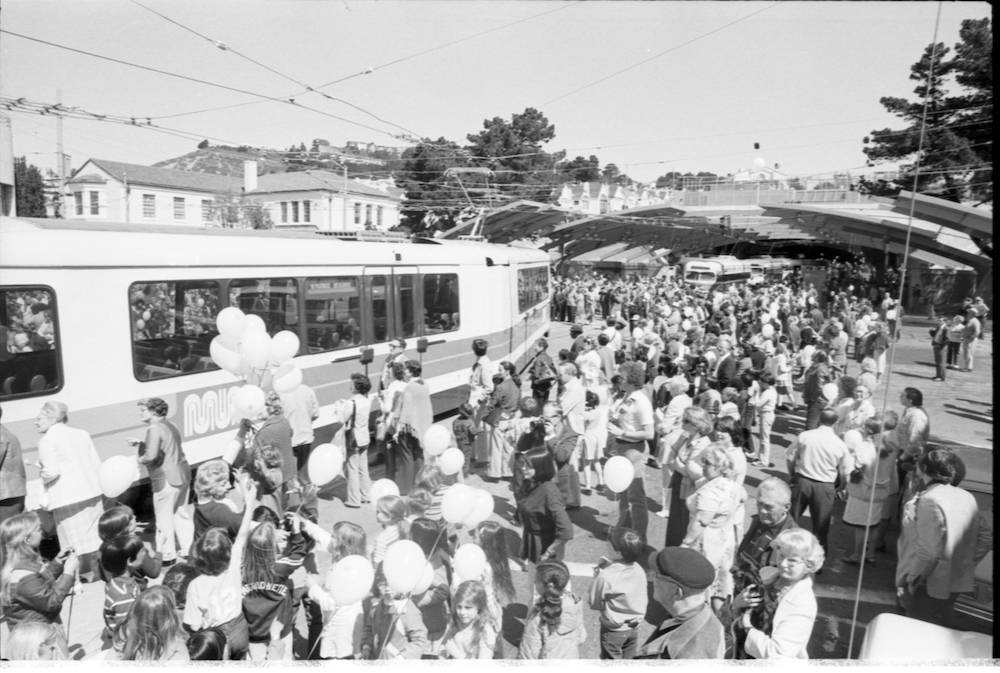 On April 2, 1979, the newly rebuilt West Portal Station opened with a ribbon cutting by the mayor, streetcar parade, and hundreds of citizens touring the station. Just a couple of weeks later, LRV service began on the K Line between Balboa Park and West Portal in advance of the full opening of Muni Metro the following year. 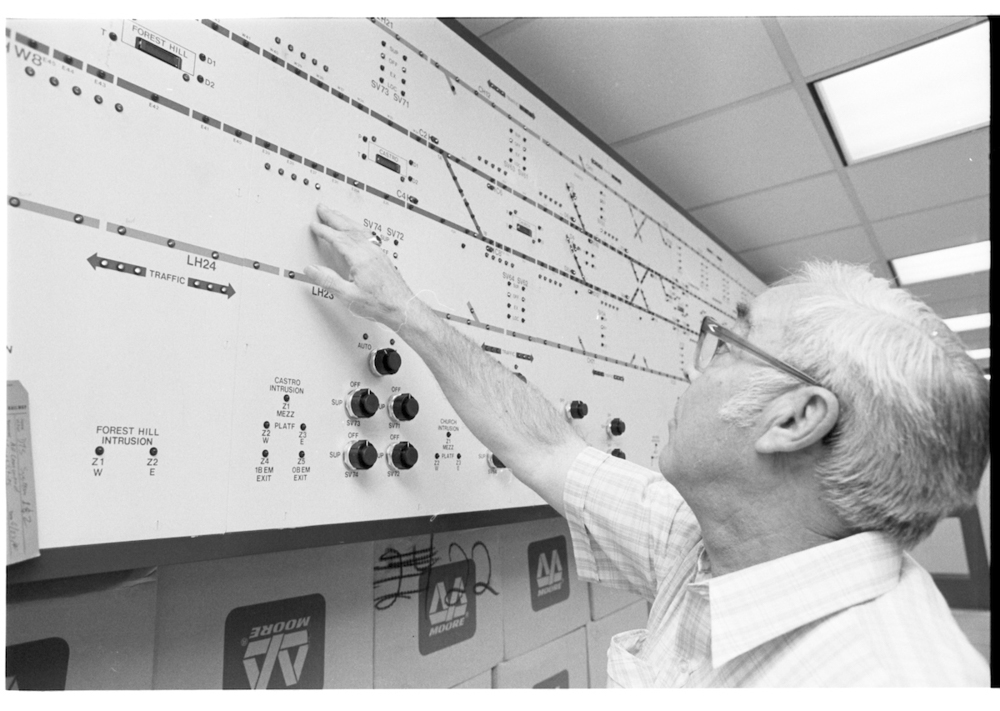 This 1981 shot, taken inside Muni Central Control, shows an electronic board indicating the position of streetcars within the Market Street Subway. At that time, this state-of-the-art tool was critical to monitoring rail traffic in the subway after it opened in 1980. 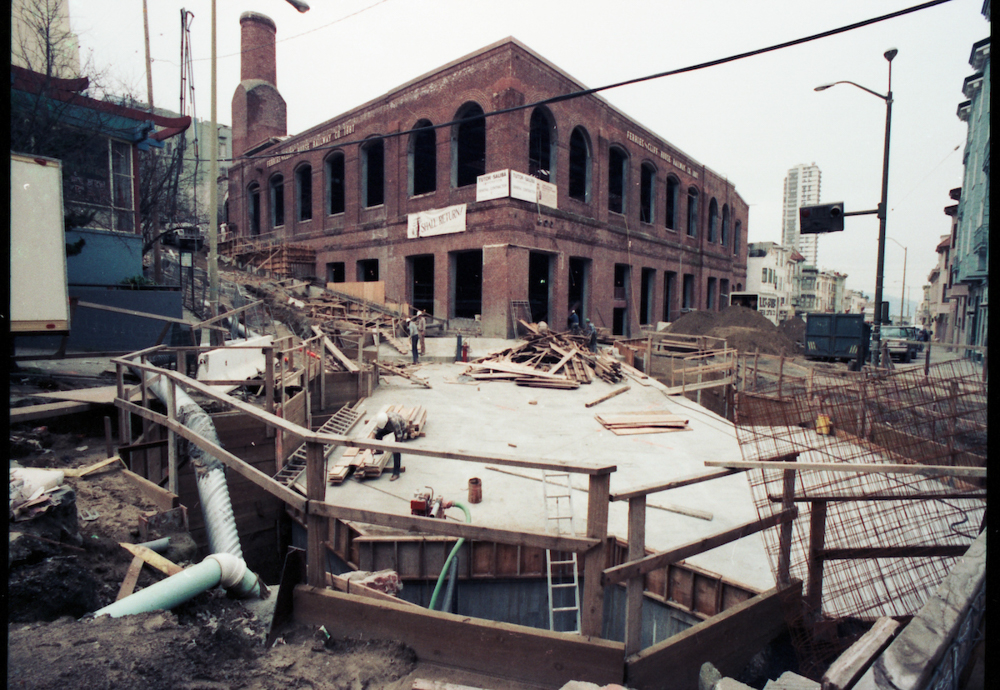 Between 1982 and 84, the Cable Car system was shut down for a complete rebuild.  This 1983 photo shows the powerhouse and underground cable infrastructure under construction at Mason and Washington Streets. 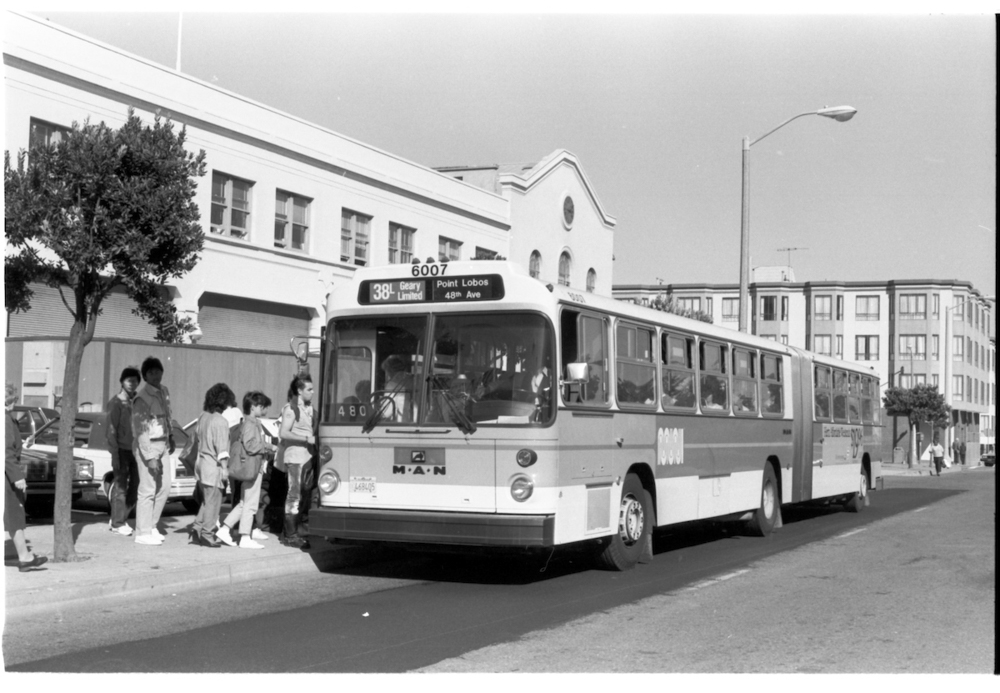 Muni purchased its first extra-long articulated buses in the 1980s to meet demand on high ridership lines like the 38L Geary Limited pictured here at Geary and Presidio in 1985. 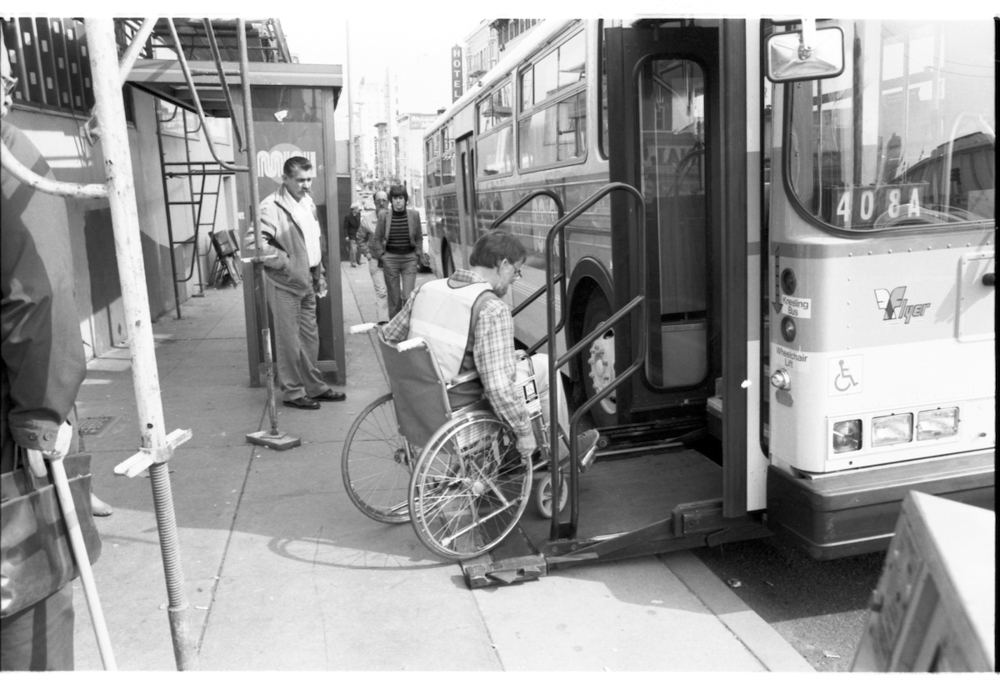 Advocacy groups and federal law brought improvements to the accessibility of the Muni system in the 1980s. With the construction of boarding ramps on rail lines, elevators in subway stations, and the arrival of buses equipped with lifts, more people were able to ride public transit. 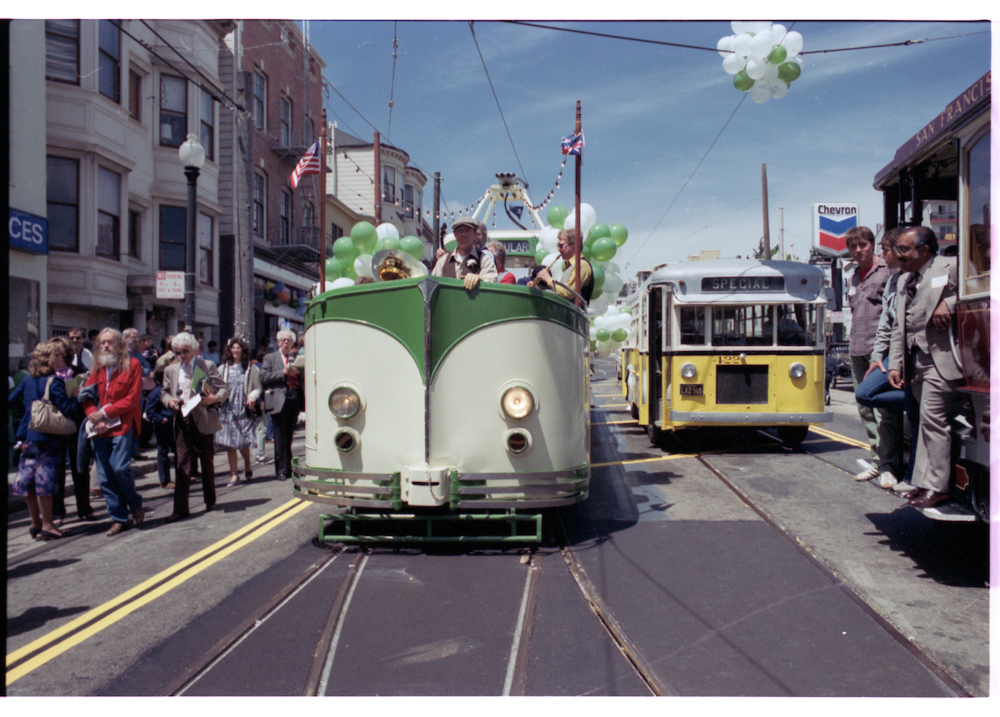 June 23, 1983 marked the first “Trolley Festival”, a celebration of the city’s long and unique transit history carried on today in the Muni Heritage festival. The open-air Boat Car, pictured here, has always been a popular attraction at the festivals. 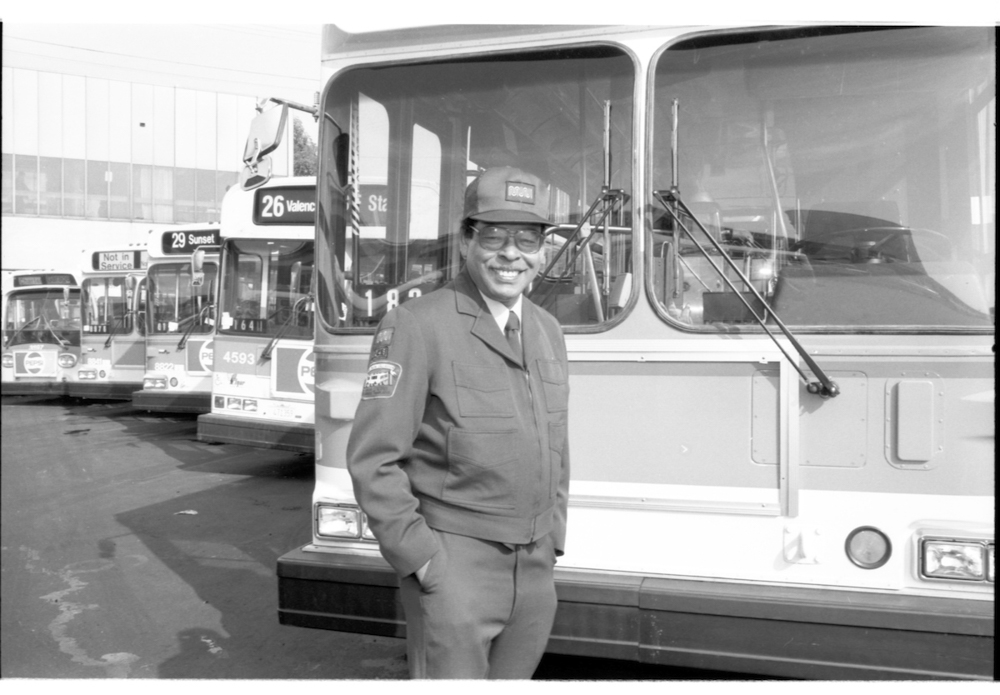 Muni Operator of the Month Marshall Lacewell poses in Woods Division bus yard for this January 1989 shot. Employee award photos are a common subject among the files currently being archived. 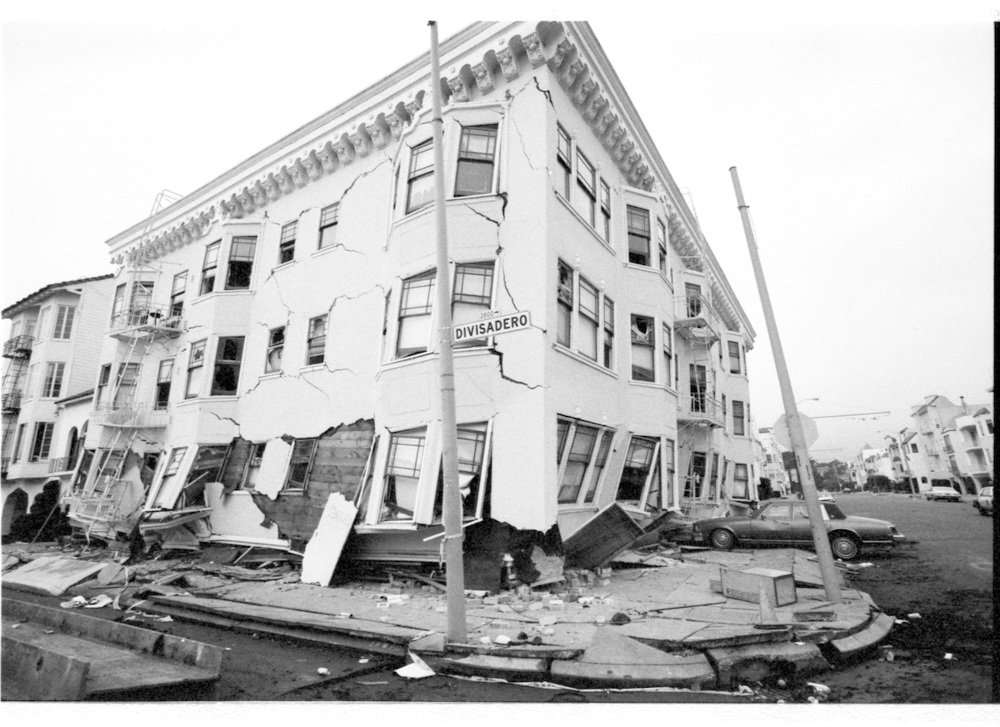 On October 17, 1989, the Loma Prieta earthquake struck with devastating consequences across the region. Muni staff worked through the night to restore transit service and an estimated 65% of vehicles were running by the following morning to provide essential transportation following the disaster. 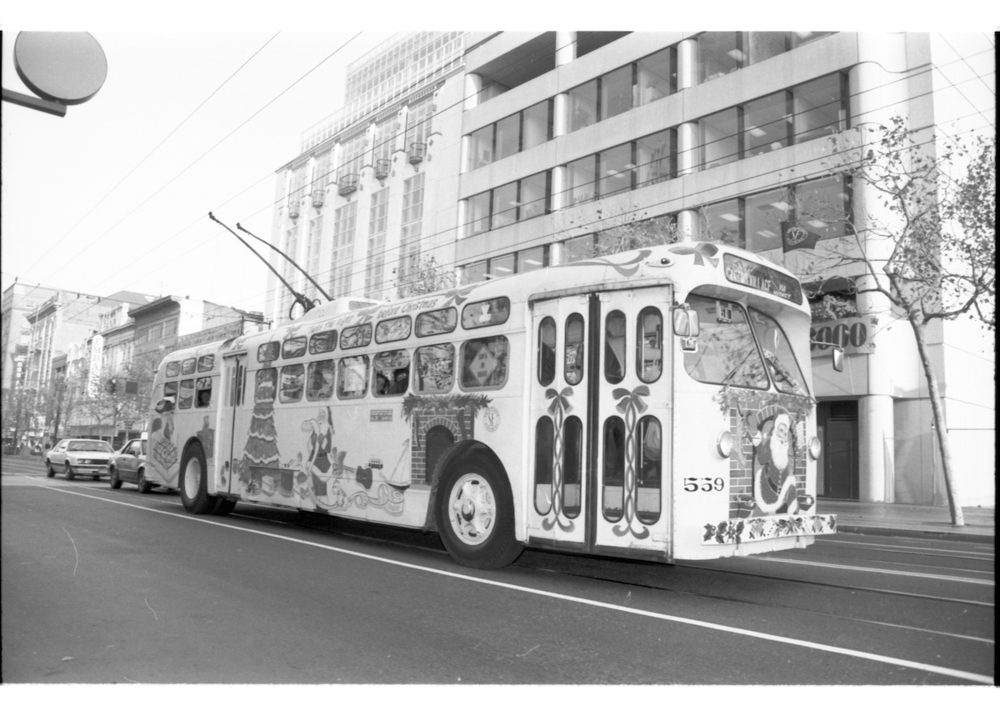 One quirky “sign of the times” shot scanned this year was this photo of Muni bus painted with Christmas decorations and a fireplace. The bus, an old Marmon Herrington trolley coach, saw limited special service in December ’89. 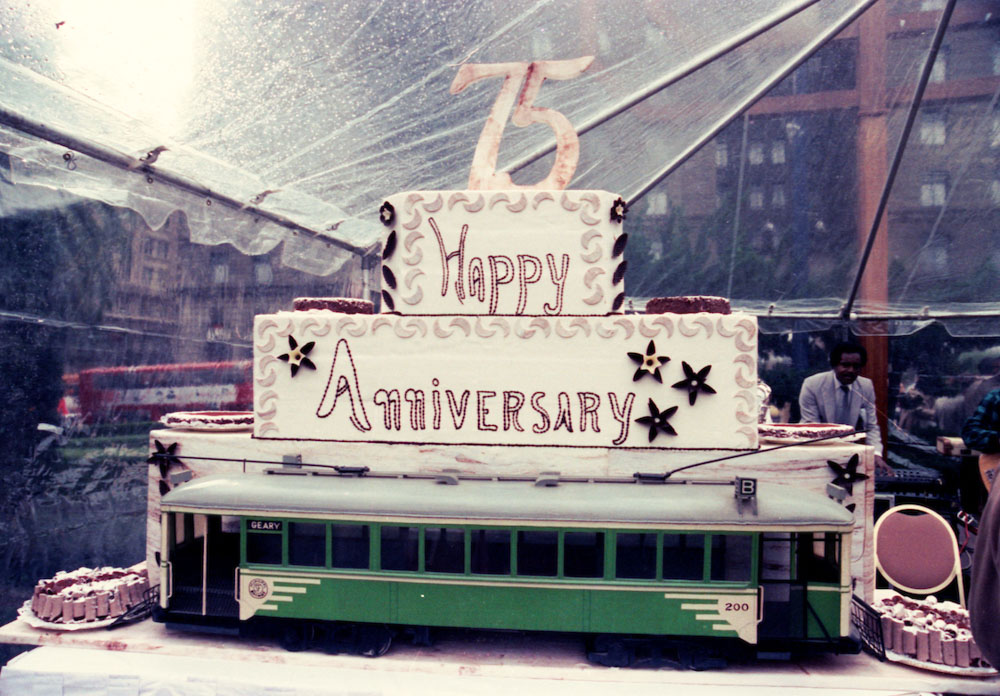 To finish off the list, a shot of a huge cake and streetcar model from Muni's 75th birthday on December 28, 1987.  As we look ahead to celebrating our 109th birthday this year, we thank our riders, supporters and leaders for their commitment as we strive to provide the most safe, frequent and reliable service.

Closing out the year with over a decade of new photos from 1978-1990 scanned, staff will continue this work into 2022. We hope you’ve enjoyed this look back in time at some of the latest images to be archived this year.  To see more of these and thousands other historic photos dating back to 1903, check out our Photo Archive web page.