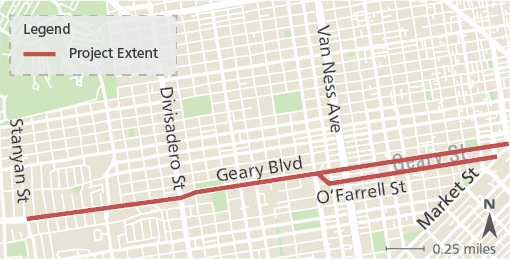 The Geary Rapid Project aims to improve transit reliability and bring safety improvements to Geary and O’Farrell between Stanyan and Market streets.

Below is a summary of proposed changes that will be brought to the SFMTA Board for consideration on August 21:

The Geary Rapid Project has been studied and designed with input from community members. If you would like to comment on these proposed changes, you may attend the SFMTA Public Hearing or file your comments in writing before the hearing:

Note that the actual time the item will be heard may be considerably later than 1:00 p.m. The agenda for the meeting will be available about a week before the meeting at SFMTA.com/calendar