Pursuant to the public hearing held between October 13, 2021 and October 27, 2021, traffic movement and safety may be improved by the changes approved below.

This directive converts the street from a four-lane roadway to a three-lane roadway with a center left-turn lane and left turn pockets at intersections to provide safety improvements for pedestrians, drivers, and other road users. This project will now be implemented as presented at the public hearing with the following changes:

Decision: Item 1 approved by the City Traffic Engineer for implementation.
Public Comments: Of the 140 comments received as part of the Engineering Public Hearing, 65% of respondents supported the project and 22% of respondents partially supported the proposed changes. The majority of comments received from the public were in favor of the project and many communicated the urgent need for traffic safety improvements. Many commenters requested for bike lanes (particularly parking protected) to be added to South Van Ness Avenue as part of the Quick-Build project. Staff noted that South Van Ness Avenue is not part of San Francisco’s existing Bicycle Network, and that implementing protected bike lanes would require removing a large portion of parking available along the roadway and signal separation at intersections for a fully protected lane. Another common request was for reduced crossing distances for pedestrians via bulbouts or painted safety zones at intersections. Staff explained that bulbouts are a major capital improvement that would require more time and funding than a typical quick-build project, and that painted safety zones do not effectively reduce crossing distances for pedestrians. There were also concerns about whether the lane reduction would cause congestion along South Van Ness Avenue and subsequent spillover onto parallel roads. Staff explained that through data collection of traffic volumes along South Van Ness Avenue and subsequent traffic modeling, no major congestion along South Van Ness Avenue is anticipated, but traffic volumes on South Van Ness Avenue and parallel streets will be monitored as part of the project’s evaluation program. There were also requests for a median or pedestrian refuge in the center of the roadway, particularly at intersections. Staff noted that a median with any raised elements would prevent emergency vehicle access to the center lane. Some comments received also expressed concern for the lane widths in the proposed design encouraging speeding, and staff responded by explaining that in a lane reduction, the slowest vehicle controls the speed along a street, thereby reducing speeds along a corridor.

For the full list of comments received and staff responses, please visit this webpage. 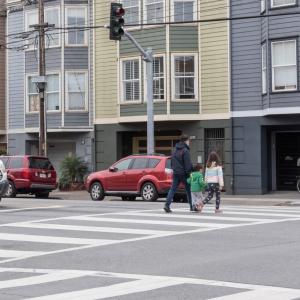