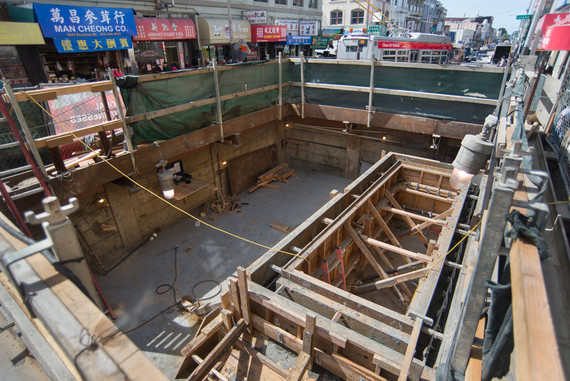 Work to finish the north egress shaft for Chinatown Station has been completed.

We are pleased to announce that work to construct the north egress emergency exit shaft for Chinatown Station has been completed.  The shaft, located on the east side of Stockton Street just south of Jackson, is one of several emergency exit stairwells leading from the Chinatown Station platform.  Work on the shaft began in 2017 and included digging down to track level, connecting to the existing station, installation of waterproofing and securing with a surface entrance with a special hatch cover that can only be opened during emergency evacuations from the inside or by the Fire Department.

This vital safety feature for was a large undertaking and we want to thank the nearby merchants and residents for thier patience. The work area around the shaft has been greatly reduced and will be used for ventilation during the final few months of construction.

Work at 4th and King slated for Mid-June

Pavement renovation work for the intersection at 4th and King Streets is tentatively slated for June 18th through the 22nd, as well as June 29th.  While there will be some pedestrian and vehicular impacts at that intersection through the course of work, there are not planned impacts to Muni service. We will provide further updates in the coming weeks.

Upcoming Work: Crews plan to renovate pavement at the intersection of 4th Street and King Street may begun starting June 18th.  Construction of the 4th and Brannan surface station platform is ongoing, as is rail installation and track foundation work along 4th Street south of Bryant.  Some lane closures may also occur at night.  Regular day shift hours are from 7am to 4pm.

Union Square/Market Street Station is subway station constructed using interlocking pile slurry walls and cut-and-cover excavation techniques, and will feature a direct concourse connection to Powell Station, in addition to future station entrances at Union Square and the northwest corner of Stockton Street and Ellis.  The worksite spans Stockton Street from Post to Ellis, and includes a small portion of Geary south of Union Square.

The 8, 8AX, 8BX, 30, 45, and 91 OWL bus routes have returned to their previous alignments outbound on Stockton Street south of Geary.

Current work: Installation of interior structural elements, and the construction of the future station entrance at the southeast corner of Union Square.  There will be a continued presence of vehicles and equipment as work at this location continues.  Work hours may span 24 hours a day, seven days a week.

Chinatown Station is subway station constructed using slurry wall, cut-and-cover, and sequential mining excavation techniques, with the future entrance at Washington Street and Stockton, featuring a rooftop plaza.  The worksite spans Stockton Street from Jackson to mid-block south of Washington.  Washington Street from Stockton through to Trenton Alley is open only for pedestrian access at the current time.

Current work: Crews are focused on construction of the north and south platform caverns, cross-cut cavern, track crossover cavern, and interior structural elements of the station headhouse.  Additionally, the sidewalk along the west side of Stockton between Washington and mid-block toward Clay has temporarily been closed to facilitate utility upgrade work.