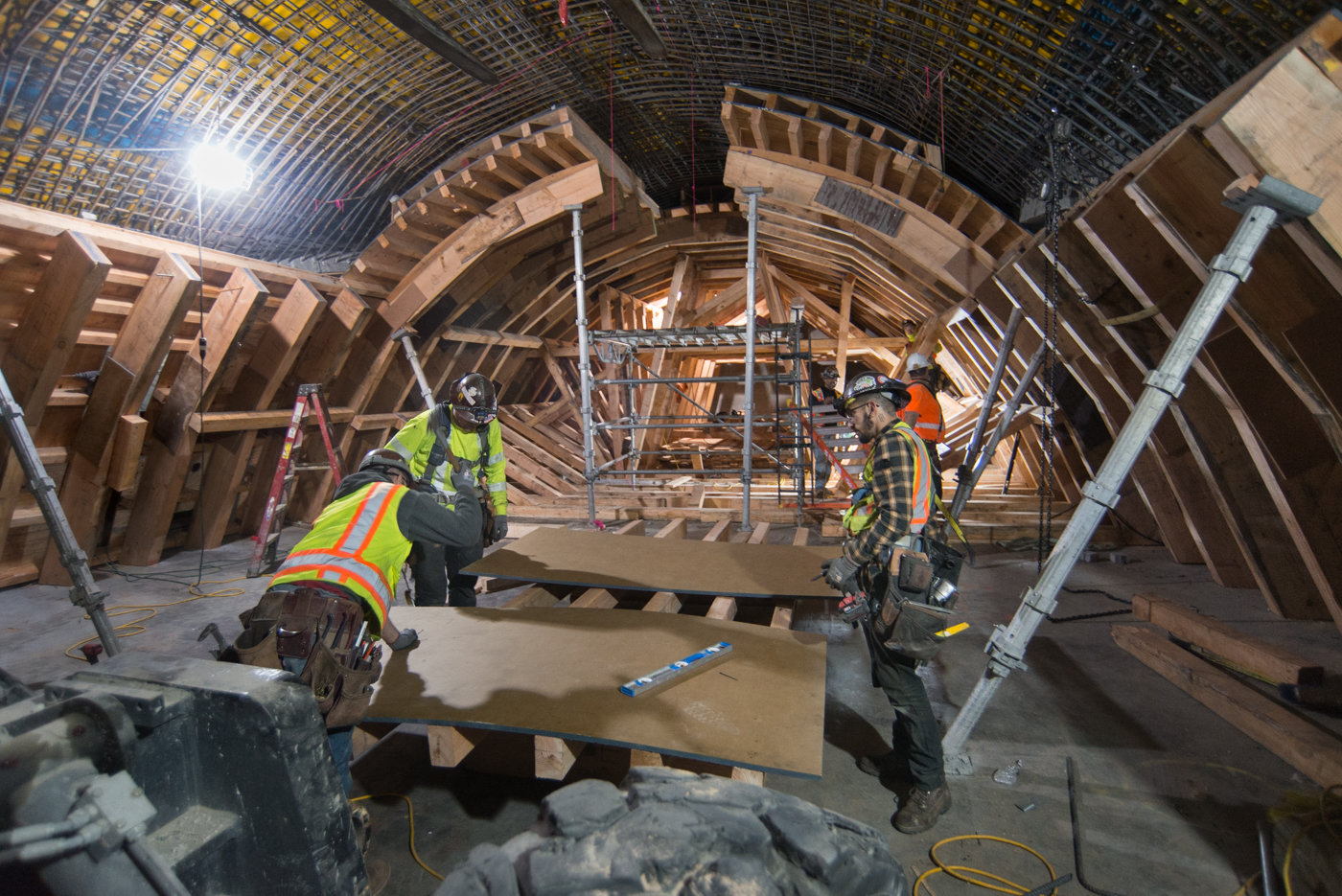 Heavy-duty concrete forms being built and placed inside the arched entrance to the Chinatown Station platform cavern.

This notice provides a construction update and a look ahead for what to expect in the areas where we are building four new stations along the alignment. You’ll find information about work activities, traffic and transportation impacts taking place over the next two weeks at SoMa, Yerba Buena/Moscone, Union Square and Chinatown. Construction schedules, bus routes, and stop locations are subject to change due to unforeseen conditions. Signs will be posted at affected stops to advise of service changes.

Reconstruction of the center portion of the roadway and installation of surface track foundations at the intersection of 4th and Bryant Streets begins May 15th and will go through May 20th.  Work hours will be 24/7. The I-80 freeway offramp at this intersection may be reduced to two lanes for the duration of this work and other detours are expected.

Construction at the North Egress Shaft along the East side of Stockton Street between Jackson and Washington Streets is nearly complete. Remaining work includes backfilling, bulb-out construction, and street/sidewalk restoration. At the conclusion of this remaining work the North Egress Shaft area will be secured for tunnel ventilation. Parking along the East side of Stockton Street will be restored as well as the Northbound vehicular traffic lane. The size of the work zone will also be reduced, increasing the sidewalk area.

Proposed Changes to 4th Street between Bryant and King

Once the Central Subway Project has finished, the SFMTA is exploring several changes to the design of 4th Street between Harrison and King streets to minimize delays for Muni while insuring safety for all roadway users. These changes include:

More information about these proposals and a diagram can be found on our website. The proposals will go for an initial public engineering hearing on May 17. See our website for more details and how you can share a public comment. 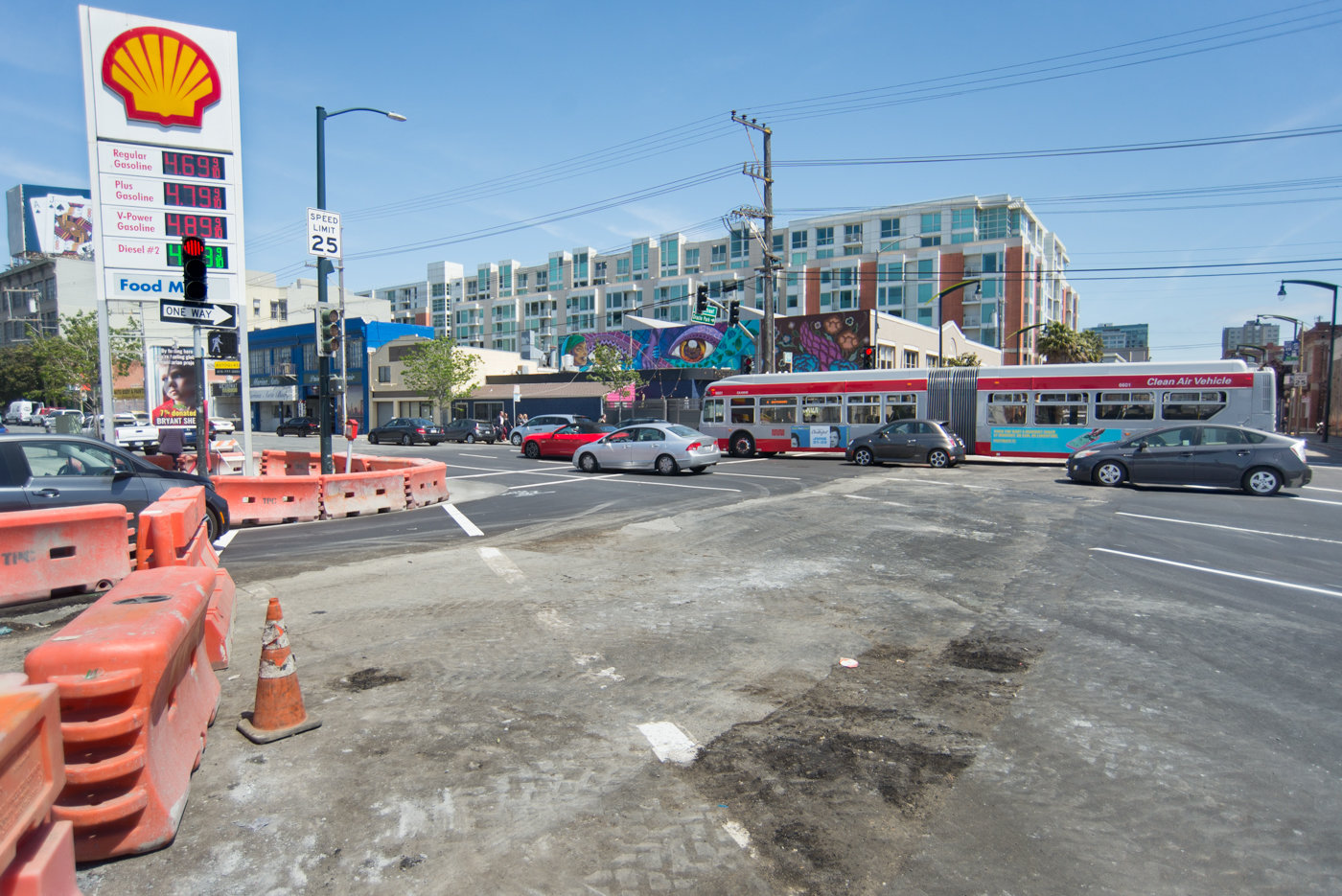 The central portion of 4th Street leading out of the tunnel portal across the 4th and Bryant intersection is slated to be rebuilt in the coming weeks to add rail foundations and a new road slab.

Roadway restoration and track foundation work will be resuming at the 4th and Bryant intersection.  This work will begin May 15th and will be 24/7 through May 20th.  Construction may affect vehicular and pedestrian traffic through that part of the intersection, the I-80 offramp may be temporarily reduced to two lanes.  Construction of the 4th and Brannan surface station platform is also ongoing.  Some lane closures may also occur at night with regular day shift hours being from 7am to 4pm. 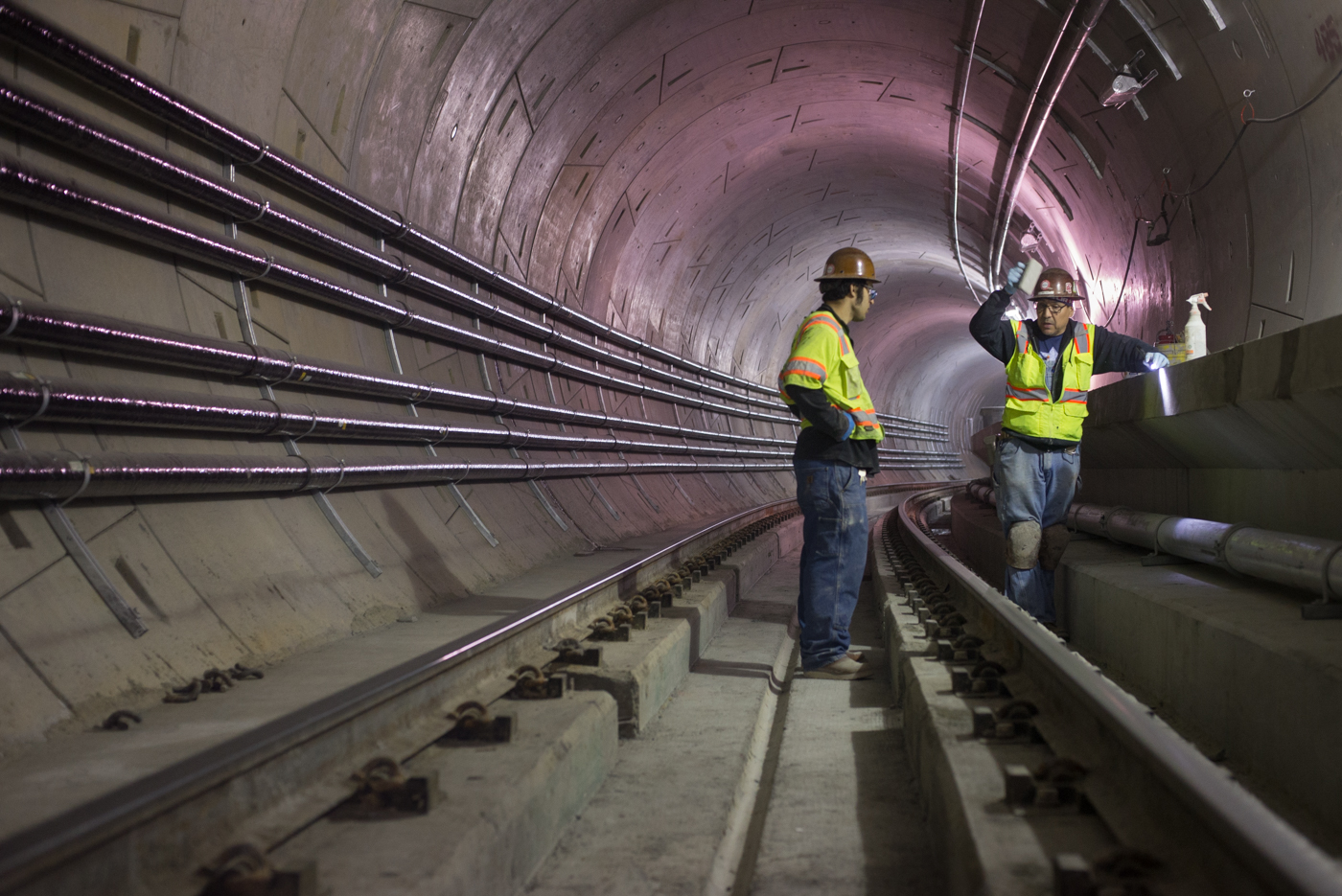 What: 4th and Bryant repaving work
Time: 24 hours
When: 7 am, May 15th through May 20th
Where: 4th Street at Bryant
What: Road slab reconstruction, track foundations, and street repaving 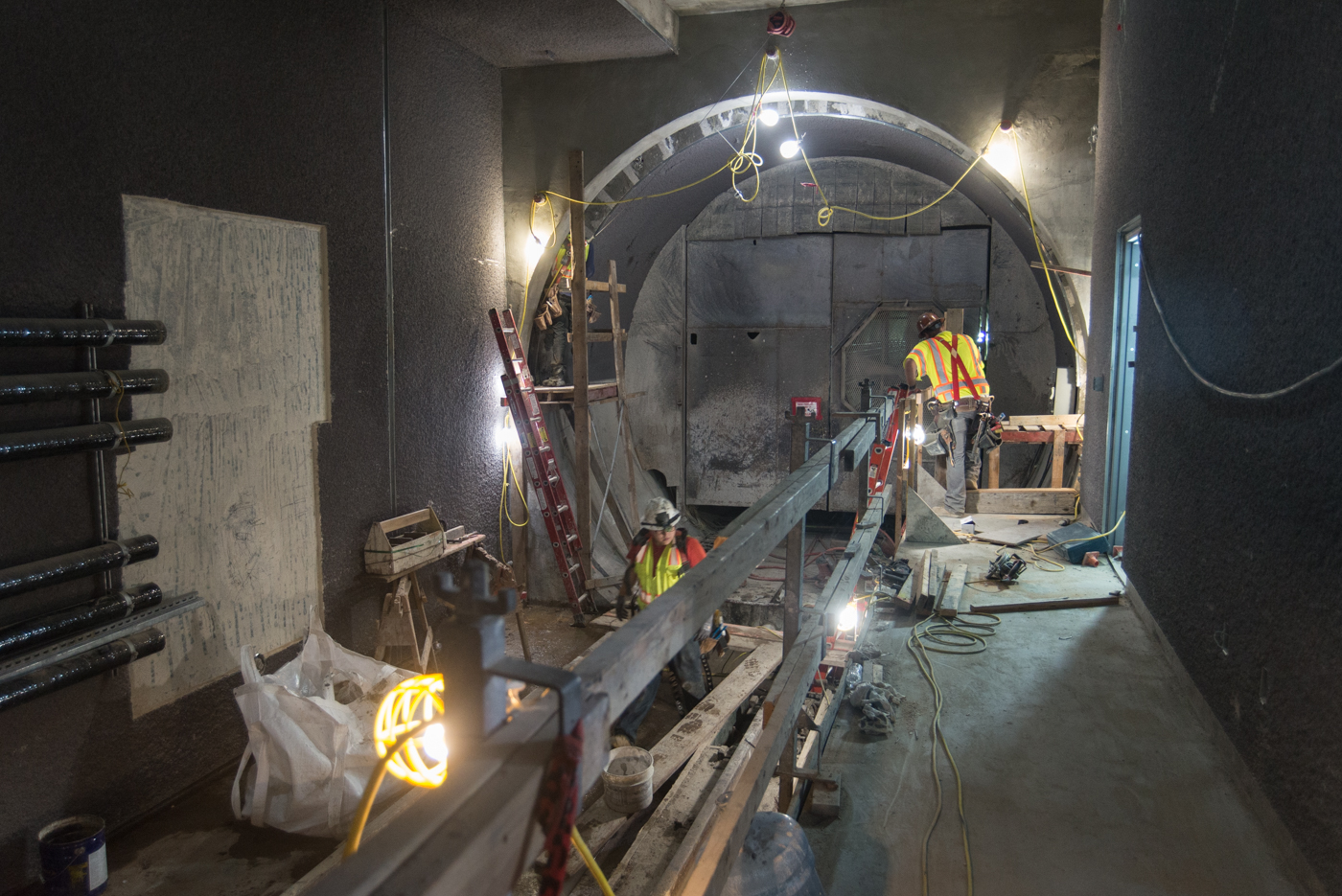 Crewmembers prepare the gap between the Yerba Buena/Moscone Station platform and the southbound tunnel entrance, where a transition and drain connector are being built.

Work along 4th Street between Howard Street and Folsom Street consists of construction of the underground Yerba Buena | Moscone Station. The cut and cover method involves construction of a box frame structure within a trench excavation that is subsequently backfilled. Water main replacement work continues at night at 4th and Howard streets.  Work hours are 9 p.m. to 5 a.m.  Eastbound traffic on Folsom may be impacted.  Three through lanes are in place southbound 4th Street. Westbound traffic on Howard Street may be impacted. 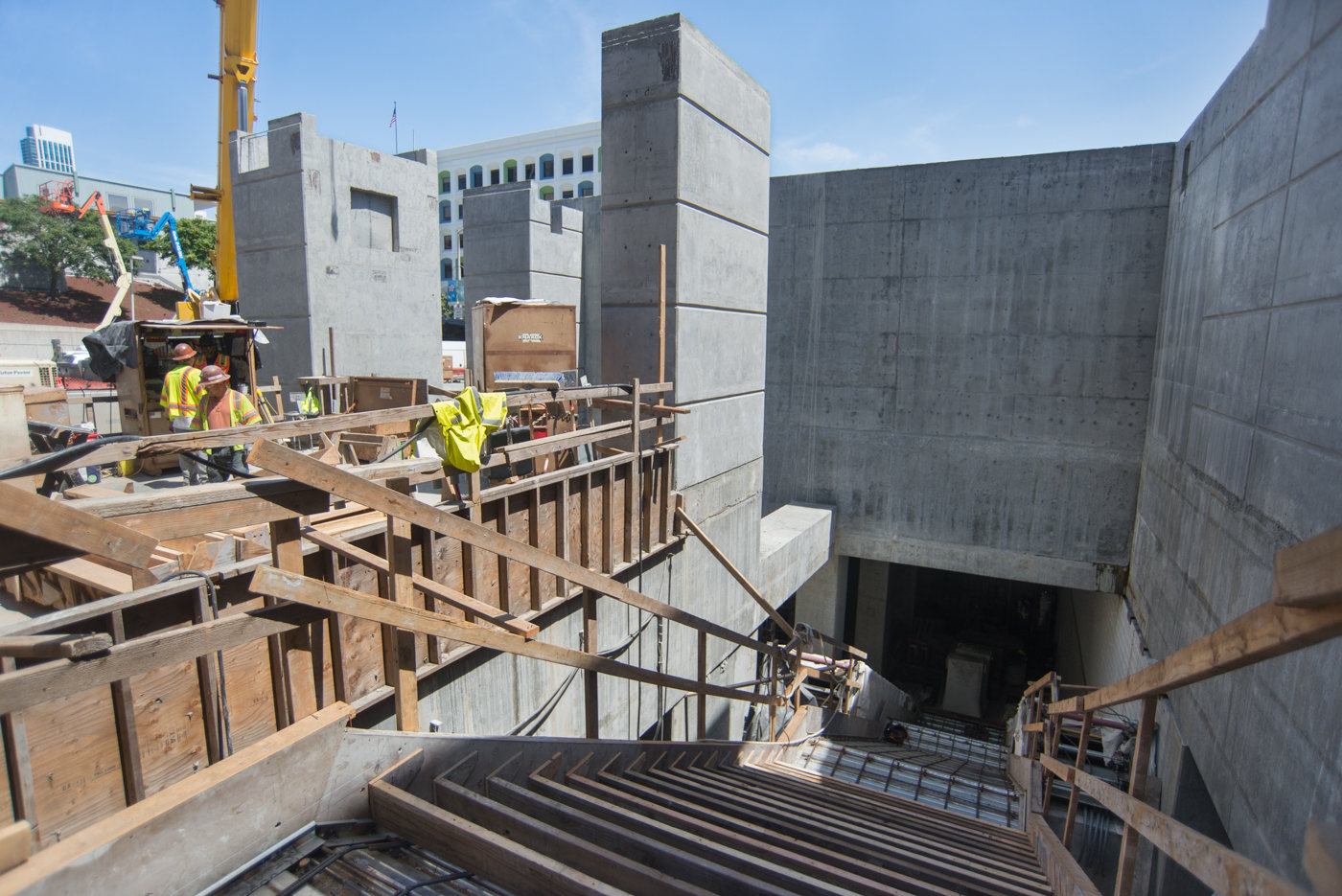 Large concrete structures and formwork for stairs mark the future entrance to the Yerba Buena/Moscone Station.

What: Installation of headhouse and station interior elements
Time:  5am - 3:30pm
When: Monday to Friday
Where: 4th Street between Howard Street and Folsom Street 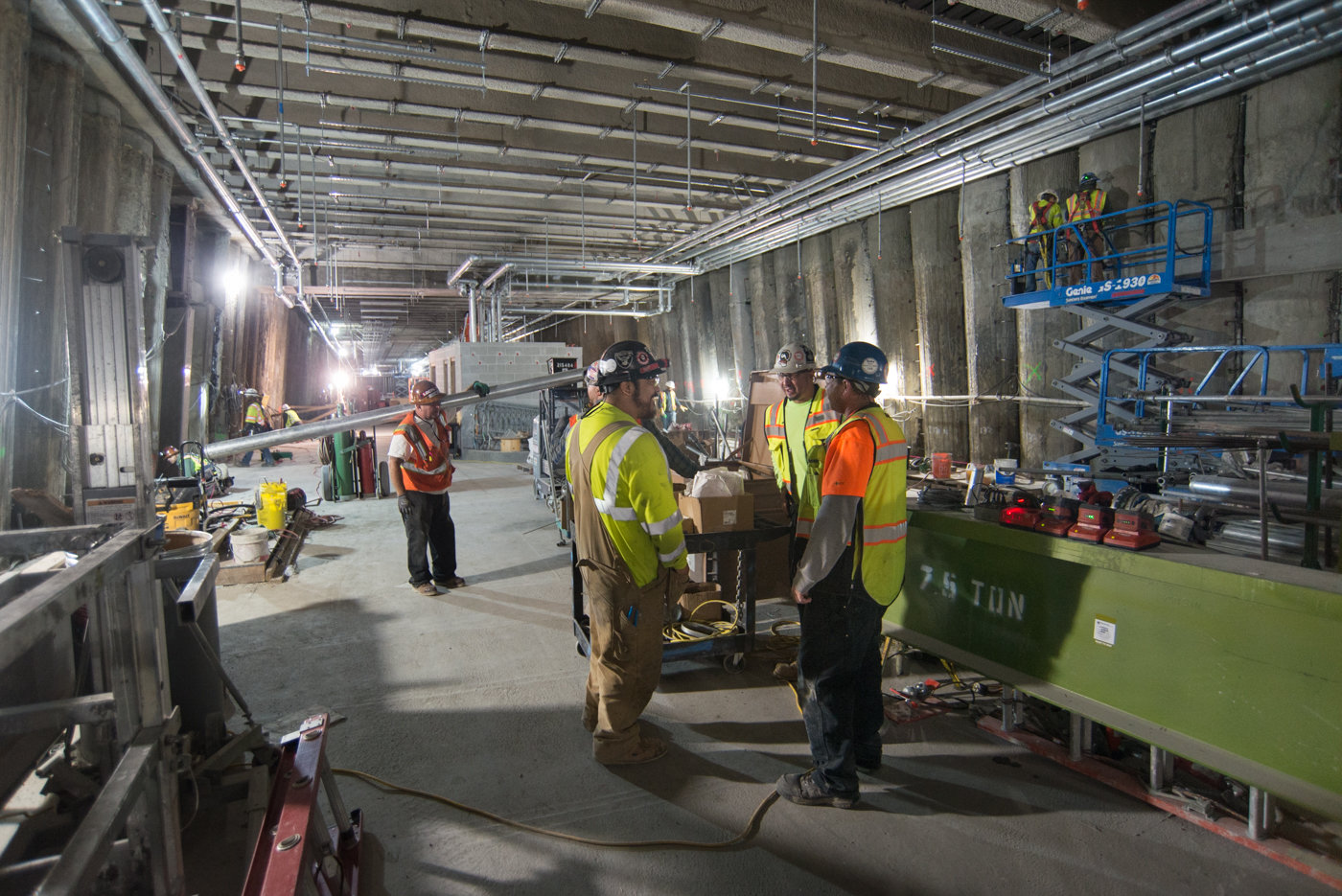 A crew gathers on the mezzanine level of Union Square/Market Street Station just north of O'Farrell, where utility conduits and other interior elements are being installed.

The construction of an underground Union Square|Market Street Station uses the cut and cover method known as a "top-down" or "bottom-up" approach and involves construction of a box frame structure within a trench excavation that is subsequently backfilled. Stockton Street was reopened to both traffic and transit between Geary and Ellis. This allowed the 8, 8AX, 8BX, 30, 45, and 91 OWL bus routes to return to their previous alignments.  One lane on the south side of Ellis Street is open at all times for eastbound traffic.  Parking garage access is open on north side of Ellis Street.

The installation of waterproofing, structural elements, and concrete at the southeast corner of the Union Square Garage continues.  There will be a continued presence of vehicles and equipment as work at this location continues.  Installation of internal structural elements and utilities is ongoing under Stockton Street as well as the northeast corner of Stockton and O'Farrell. 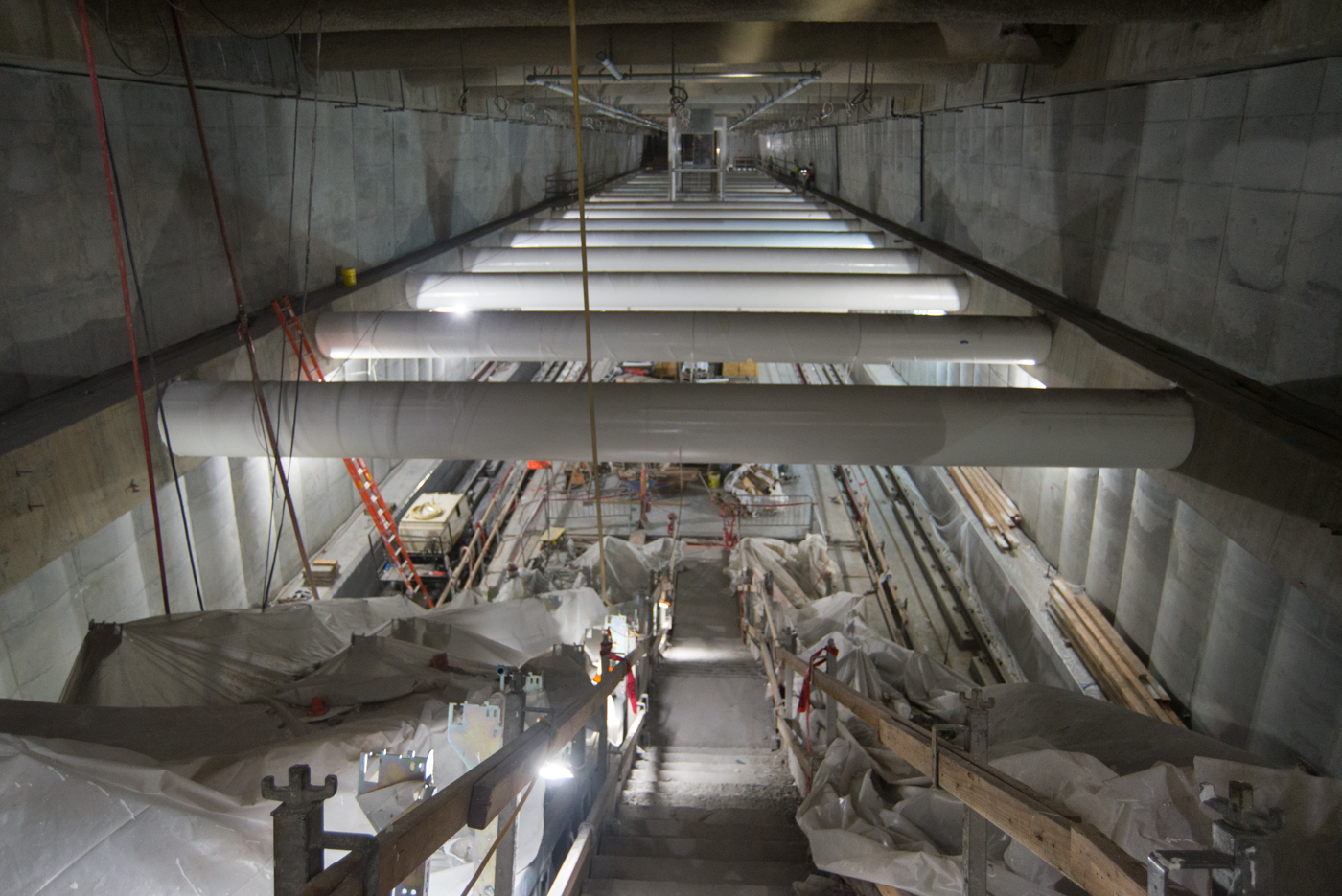 The cavernous hall of the Union Square/Market Street Station platform as seen from the south staircase under Stockton near O'Farrell. 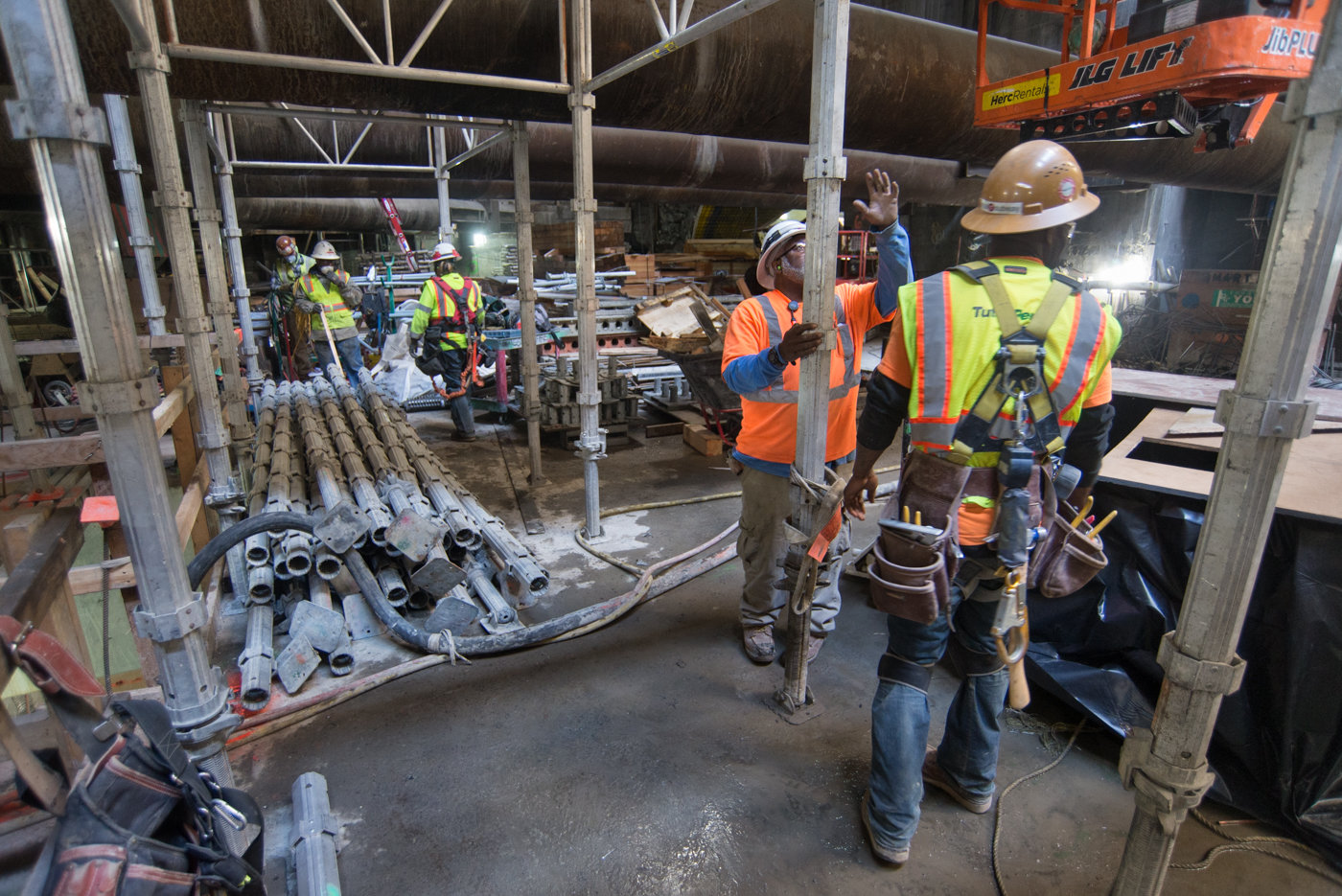 Crews have been hard at work putting up support scaffolding where needed and building interior structures inside Chinatown Station.

The construction of Chinatown Station used the sequential excavation method (SEM), providing a high degree of flexibility and control over ground conditions, thereby greatly reducing the risks of construction. This method of tunnel construction is used worldwide for small to large openings in a variety of ground types ranging from rock to soil.  Excavation of the Chinatown Station site was completed in February 2018.

Current activities include construction of the north and south platform caverns, cross-cut cavern, track crossover cavern, and interior structural elements of the station headhouse.  The sidewalk along the west side of Stockton between Washington and mid-block toward Clay has temporarily been closed to facilitate utility upgrade work.  A pedestrian walkway is open on the north side of Washington connecting Trenton and Stockton.  Work to build the north egress shaft on Stockton south of Jackson is underway. 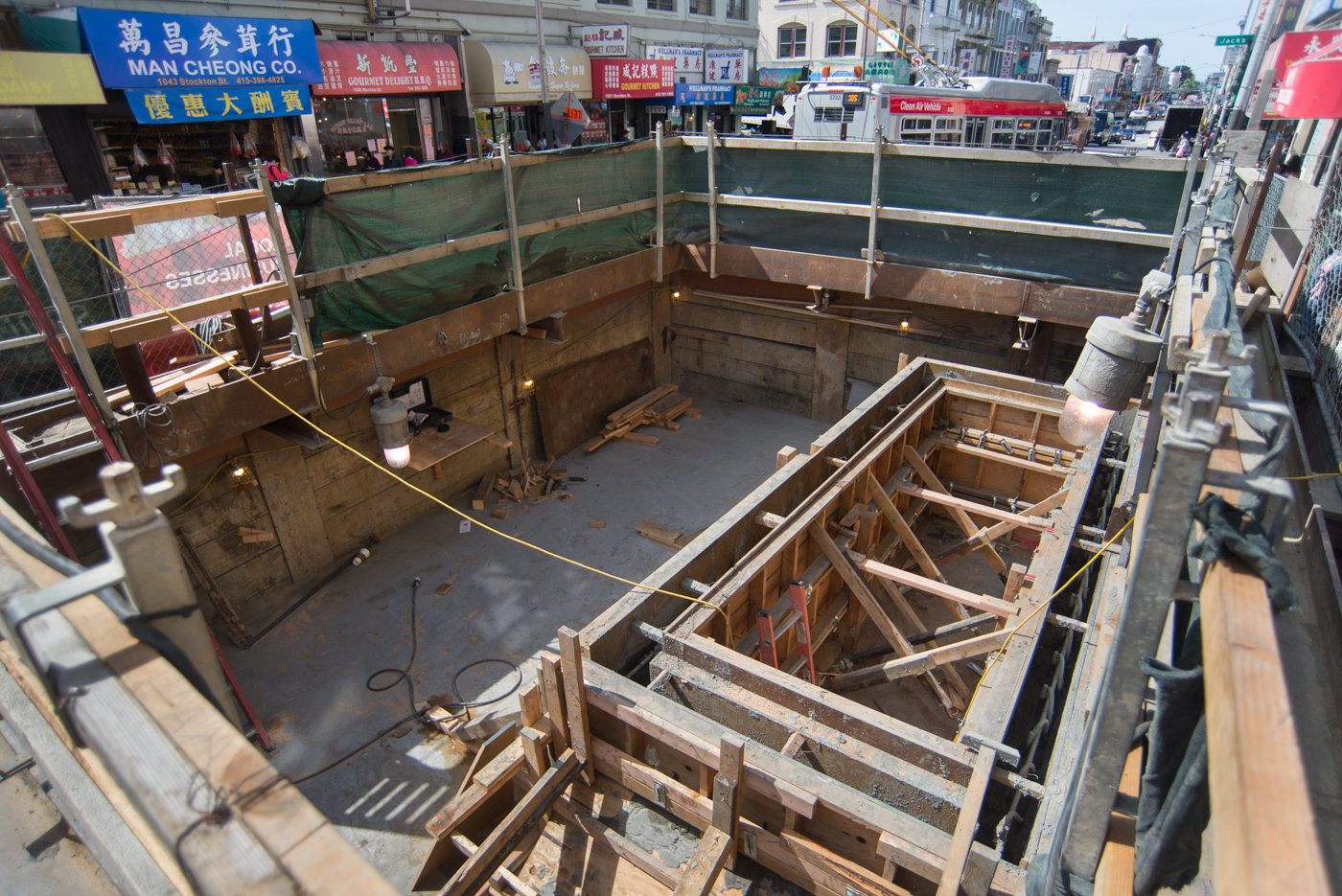 The topper slab for the Chinatown Station north egress emergency exit shaft just south of Jackson Street has been poured. This work area will shrink in the coming weeks as work is finished.