With the completion of Central Subway, the SFMTA will implement the final phase of the 4th Street Improvement Project, combining the bus stops on the south sides of Howard and Folsom into a single stop on the north side of Folsom, by the new Yerba Buena/Moscone Station.

Work will take place on January 5th and 6th, in time for the start of the new T Third route via Central Subway on January 7.

Work will be minimal. It will include:

The new T Third route from Chinatown-Rose Pak to Sunnydale starts Saturday, January 7, 2023, via Central Subway. Service on the new T Third line will run Monday through Friday, 6 a.m. to midnight, and Saturdays and Sundays, 8 a.m. to midnight. While the new T Third line will continue to provide service along 3rd Street, it will no longer run along Embarcadero or Market Street. Also, the K Ingleside will now travel between Balboa Park and Embarcadero Station. Visit our Service Changes page (SFMTA.com/ServiceChanges) for more details.

Customers on the 30 Stockton and 45 Union/Stockton can transfer to Yerba Buena/Moscone Station for new T Third service south to UCSF/Chase Center, Mission Bay, Bayview and Sunnydale. Use our website (SFMTA.com/TripPlanner) to plan your new trip. 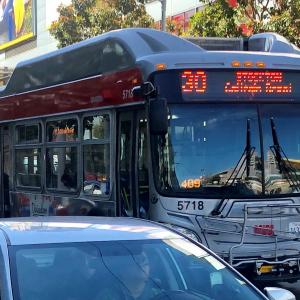