Based on community input, a proposal for the L Taraval that keeps the inbound 17th Avenue stop near Safeway while improving reliability, safety, and accessibility for the line’s 30,000 daily riders will go to a Public Hearing at 10:00 am on Friday, June 15th at City Hall, room 416. A previous proposal that would have removed this stop has been reworked and this new proposal was developed in collaboration with Supervisor Norman Yee and neighborhood residents.

To keep the 17th Avenue inbound stop while boosting reliability for transit riders, the new proposal consolidates two lesser used inbound stops: Forest Side Avenue/Ulloa Street and 15th Avenue/Taraval Street. These two stops would be combined into a single new stop on Ulloa Street at 14th Avenue. This would require no changes to parking and would be only a minor shift for most nearby residents. The remaining 17th Avenue inbound stop would shift to the east side of 17th Avenue, bringing it closer to the existing 15th/Taraval stop. These changes would require removing eight, metered parking spaces on Taraval near 17th Avenue and no changes to parking on Ulloa Street.

This new proposal has many benefits:

The diagram below illustrates the proposed stop changes: 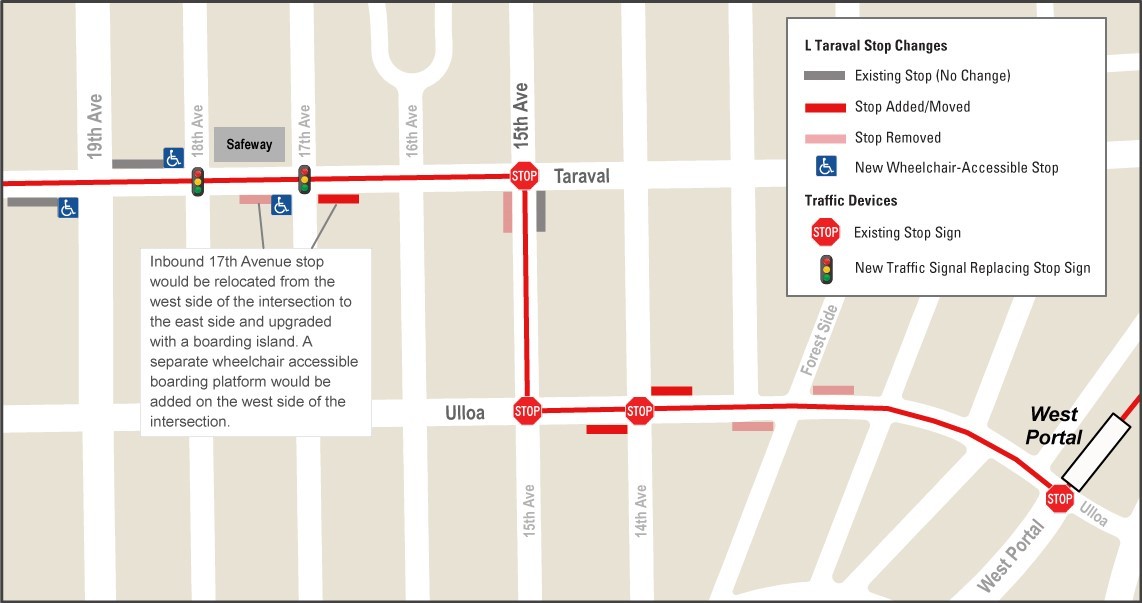 These changes are all a part of the much larger L Taraval Rapid Project which will make riding the train safer and more efficient by adding boarding islands, transit priority traffic signals, bulbouts for safer pedestrian crossings, new trees, enhanced crosswalks and unique wayfinding elements. In addition, the project will rehabilitate infrastructure on Taraval Street by replacing the train rails, overhead wires, water lines and sewers, as well as repaving the street. All of these changes will make Taraval safer and more inviting for everyone that uses it.

In order to reduce conflicts between bikes, trains, and vehicles on Ulloa Street, a separate but related proposal will be discussed at the same public hearing. This proposal would move the current bike lane on Ulloa Street between 15th on Forest Side avenues to Vicente Street. The current bike lane passes next to L Taraval stops, creating a potential conflict with people getting on and off the train. The proposal would also extend the existing bike lanes on Vicent an additional three blocks to West Postal Avenue. Finally, sharrows (shared lane markings for bikes and vehicles) would be extended on Forest Side from Vicente to Ulloa in order to connect with existing bike routes. These proposed changes would not require parking removal.

Comments on these proposals are welcome in person during the hearing:

You can also submit comments via email to: Phillip.Pierce@sfmta.com

After a community process and approval from the SFMTA Board, as a way to optimize the parking supply, new time limits will be installed for some parking spaces on Taraval Street. Parking spaces without time limits on Taraval have very little turnover and are full most of the day, which means that fewer customers can park in these spaces to visit local merchants.

The new time limits would be in effect Monday through Saturday, 8:00 a.m. to 6:00 p.m. Unmetered time limits will be installed soon on the following blocks:

The installation date of these new signs is planned for late June.