Want to learn about next steps for the 43 Masonic & 44 O'Shaughnessy Transit Improvements (described below)? View our on-demand presentation anytime to hear about the evaluation of the temporary emergency lanes and next steps to pursue making them permanent.

Throughout the course of the pandemic, the SFMTA focused on maintaining a core service network serving essential workers and those who depend on Muni for essential trips. To avoid overcrowding and ensure frequency of service, we began implementing Temporary Emergency Transit Lanes on key routes at locations where traffic bottlenecks occur. Portions of the 43 Masonic 44 O’Shaughnessy routes were chosen for the implementation of these temporary treatments, based on observed travel time improvements and ridership levels.

The 43 Masonic, a key north-south connector in San Francisco, showed up to 25% travel time savings during the shelter-in-place, when there was significantly less car traffic, particularly on Masonic Avenue between Turk and Oak Streets. Another vital cross-town route, the 44 O'Shaughnessy, saw travel time savings of 30%, particularly at two major transit points, the Glen Park BART station and Forest Hill Muni Metro station.

After presenting an initial plan to the SFMTA Board for approval in June 2020, a virtual community meeting was held in September 2020 to gather feedback about the 43 Masonic-44 O’Shaughnessy proposal. Subsequently, based on public input, monitoring of transit speeds and traffic conditions and the experience we had with temporary lanes installed in other parts of the City, our team prioritized implementation of key segments of the project. Those improvements, including transit lanes and left-turn restrictions, were implemented in April 2021.

Converted the lane closest to the curb to a temporary transit lane: 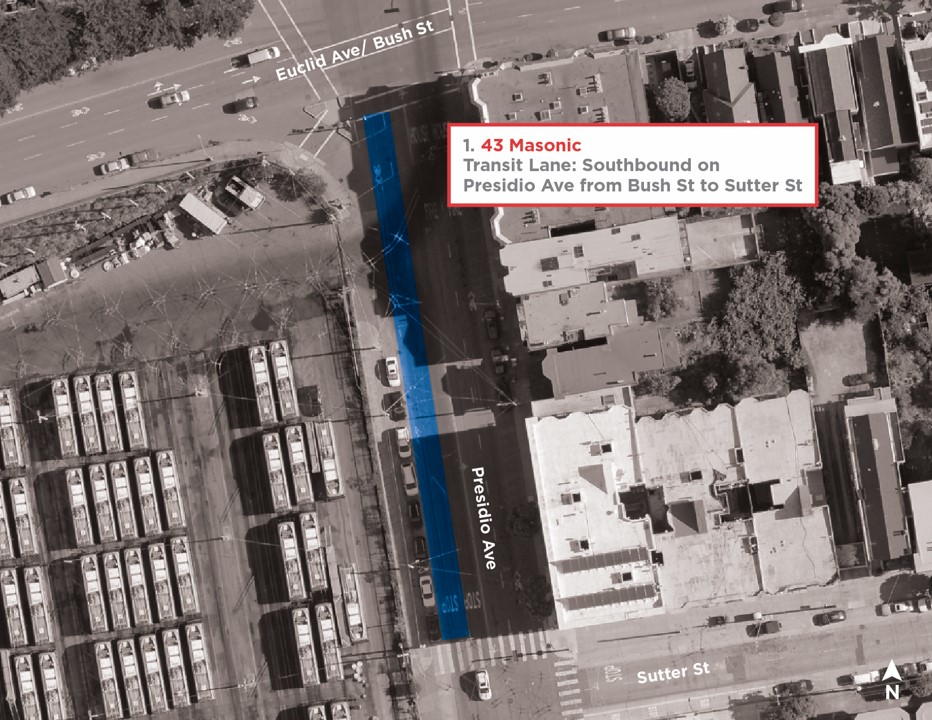 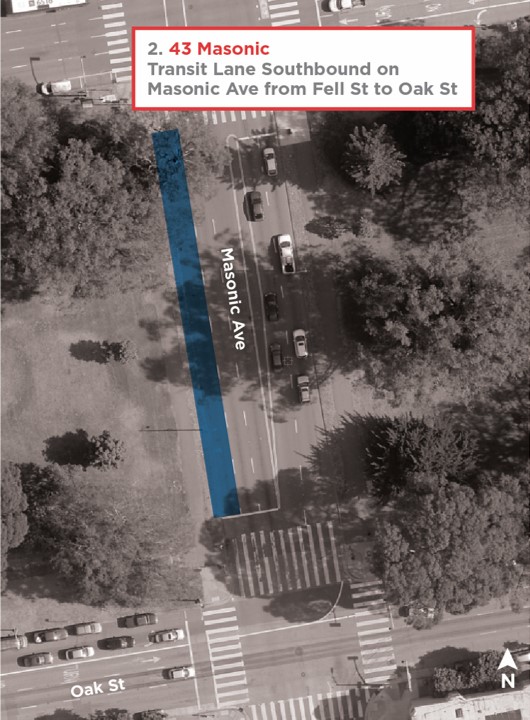 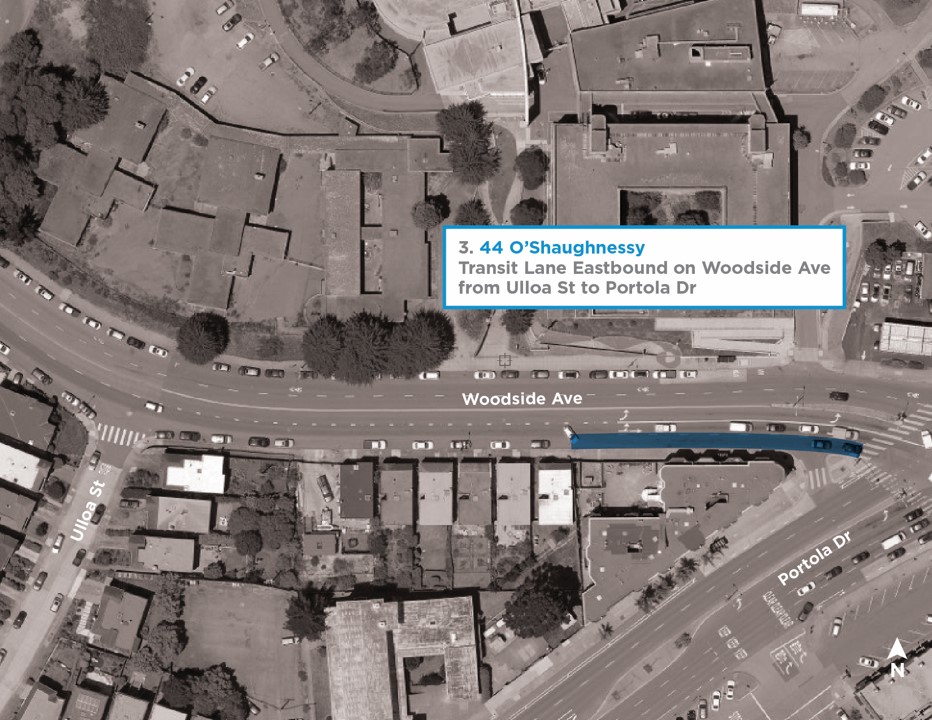 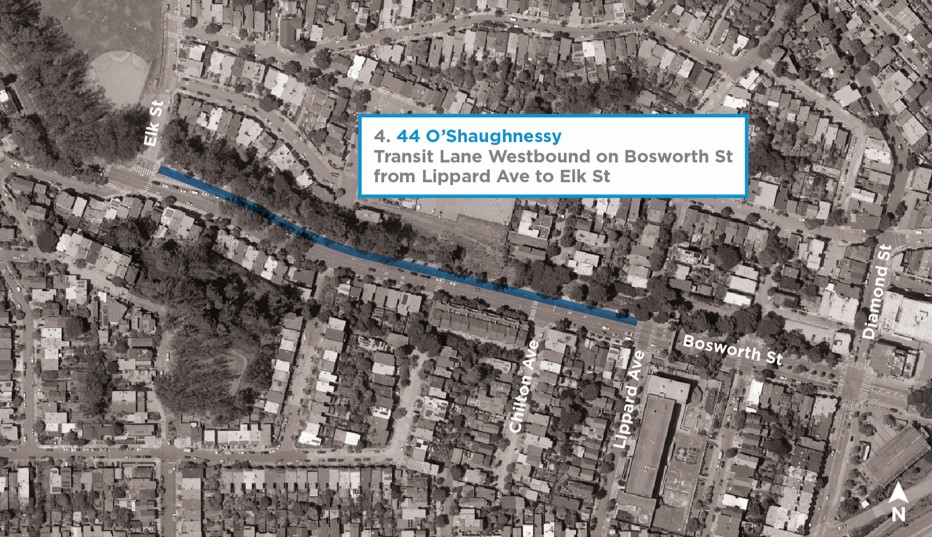 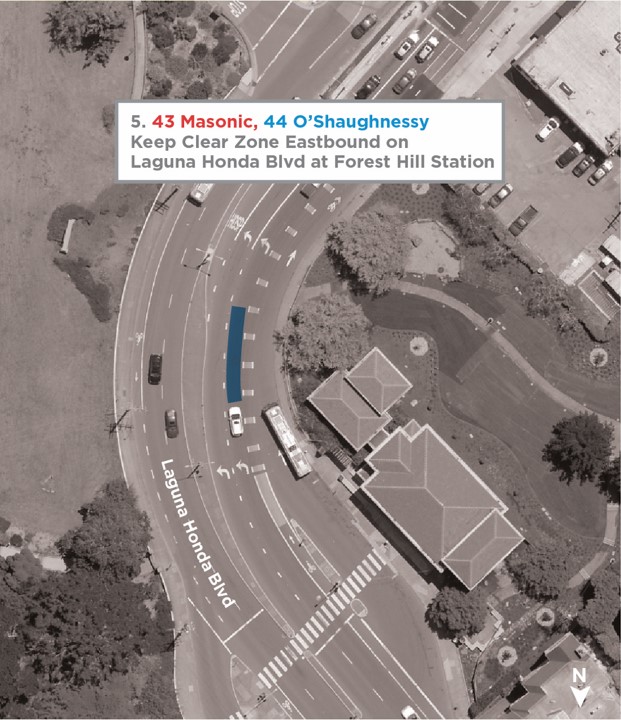 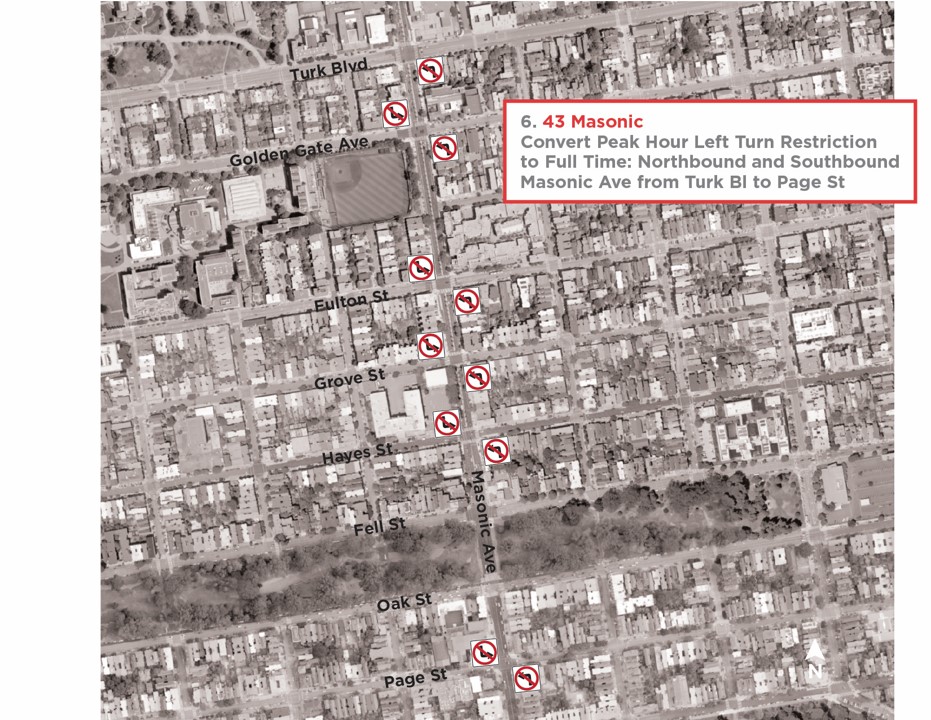 Masonic Avenue both directions: Turk to Haight Streets at intersections that do not have dedicated left turn lanes, in effect during peak hours

Most intersections on Masonic Avenue do not have dedicated left turn lanes, which causes vehicles to frequently make quick lane changes into the right lane to go around vehicles waiting to turn left.  These quick lane changes can often impede the movement of buses in the right lane.  Implementing full-time left-turn restrictions at these intersections, which is a component of the temporary emergency transit lanes approved project, will reduce these quick lane changes and improve bus speeds and reliability. In addition, since left-turns are a chief cause of vehicle collisions in San Francisco, this should provide a safety benefit for pedestrians, seniors, people on bicycles, and others on this vital stretch.

In summer 2021, we will undertake an evaluation of the effectiveness of these changes to determine whether there is support for making them permanent. This will include a community survey in addition to technical evaluation metrics. To participate in the survey when it becomes available, sign up for project updates.

Thank you to everyone who attended the Community Meeting on September 16, 2020 or provided comments on the 43 Masonic/44 O’Shaughnessy temporary emergency transit lanes.

Aug
26
43 Masonic & 44 O'Shaughnessy Transit Lane Project Office Hours These online office hours are open to the public to ask the project team questions about the 43...
Sep
16
Virtual Community Meeting: 43 Masonic / 44 O'Shaughnessy Temporary Emergency Transit Lanes Join our online Community Meeting to learn more about this project, ask questions and provide...
Jun
30
Board of Directors special meeting, June 30, 2020 Due to the COVID-19 health emergency and to protect our Board members, SFMTA staff, and members of...