Fulton Street is a main traffic and transit thoroughfare in the Richmond District, bordering the northern edge of Golden Gate Park. Every day, residents and visitors cross Fulton Street by foot and bicycle to access the park, for commute and for recreational trips. Two of Muni’s busiest routes also serve this area, the 5 Fulton and 5R Fulton Rapid, which together averaged more than 22,000 combined boardings per weekday before the pandemic and has seen ridership recover to over 10,000 people per day in recent months.

Through a number of safety improvements, the Fulton Street Safety and Transit Project’s goal is to improve safety and accessibility between Golden Gate Park and the Richmond District across Fulton Street, as well as help reduce travel time for the busy 5 Fulton and 5R Fulton Rapid and make boarding easier for customers.

After conducting an online survey in October and November 2019, the SFMTA used the survey results to develop an initial plan to improve safety and transit on Fulton Street. The initial plan was presented at a community open house in February 2020. Following revisions based on community feedback, the final plan was presented at an SFMTA Public Hearing in July 2020 and included sidewalk widening for new transit bulbs, daylighting, and changes to the San Francisco Bike Network.

As of November 2021, key portions of the project have been completed, including improving or lengthening daylighting at 34 intersections and installing 13 painted safety zones along Fulton Street between Stanyan and La Playa streets, and relocating the inbound (eastbound) bus stop at Park Presidio from the near (west) side of the intersection to the far (east) side.

Temporary transit bulbs on 6th Avenue eastbound and 8th Avenue westbound were installed to provide the benefit of the bulbs in the interim while we design the permanent bulbs. Permanent construction is scheduled to begin in summer 2023, with completion anticipated by early 2024.

Additional funding for the project was identified in September 2021 with the help of State Assemblymember Phil Ting, who helped secure $1.6 million from the California budget to implement transit and safety improvements on Fulton Street between Arguello Boulevard and 25th Avenue.

Additional safety and transit improvements that were developed based on community feedback and that will continue to be implemented along Fulton include:

Muni is proposing to build “transit bulbs” - wider sidewalks at stops - at six stops on the 5 Fulton and 5R Fulton Rapid, along Fulton Street between Arguello Boulevard and 10th Avenue. Transit bulbs provide a range of benefits, including:

From east to west, the locations where transit bulbs will be built are:

Changes made as part of the project benefit thousands of Muni riders and people walking. Fulton Street, meanwhile, is a wide, busy street that can be challenging to cross – Fulton Street between 6th and 11th avenues is part of the City’s Vision Zero “High Injury Network”, the 13% of city streets where 75% of San Francisco's severe and fatal collisions occur - and each of the four locations where the crossing distance would be reduced is a pedestrian entrance to Golden Gate Park. The changes would require removal of just two auto and three motorcycle parking spaces, on the park side of the street at 6th Avenue.

These changes are being proposed in coordination with the SFMTA’s Fulton Street Safety Project. 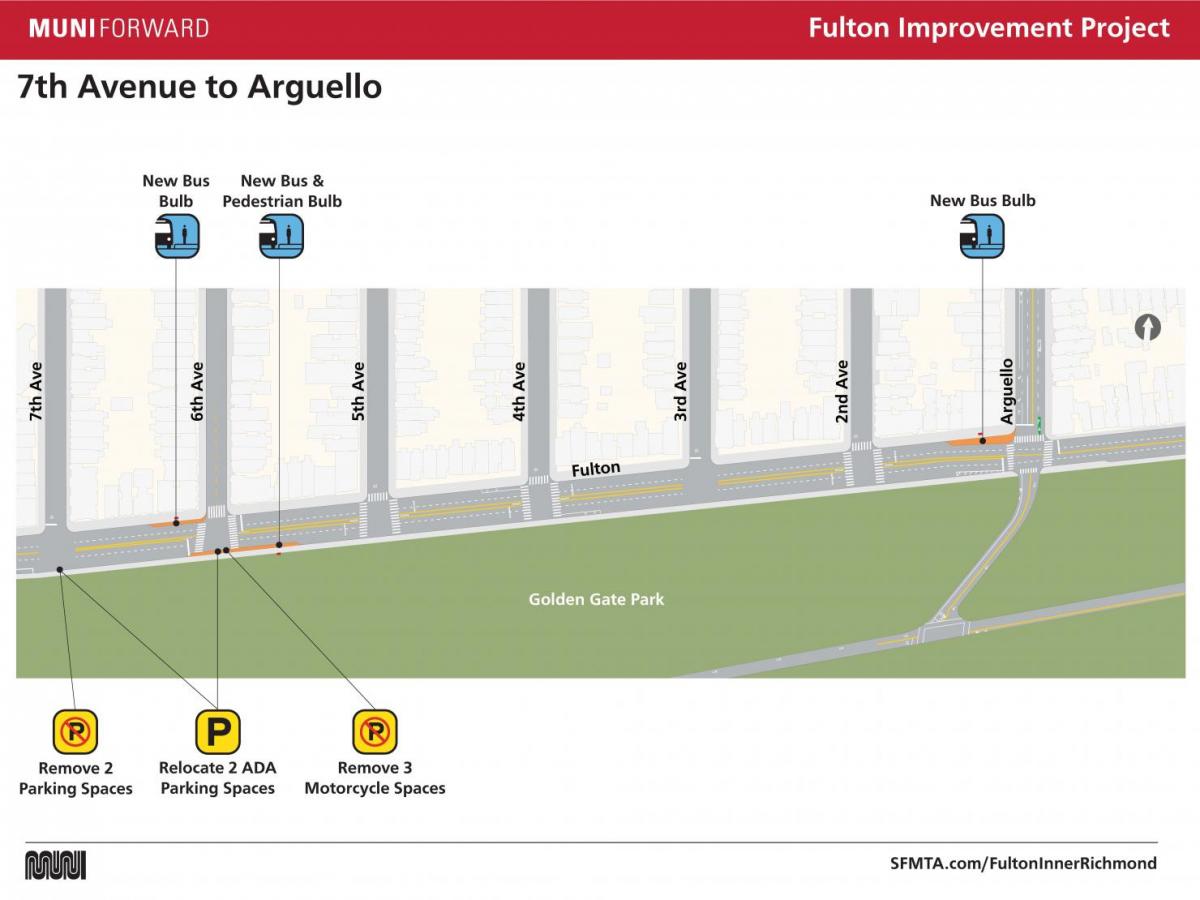 From 7th Avenue to Arguello Boulevard 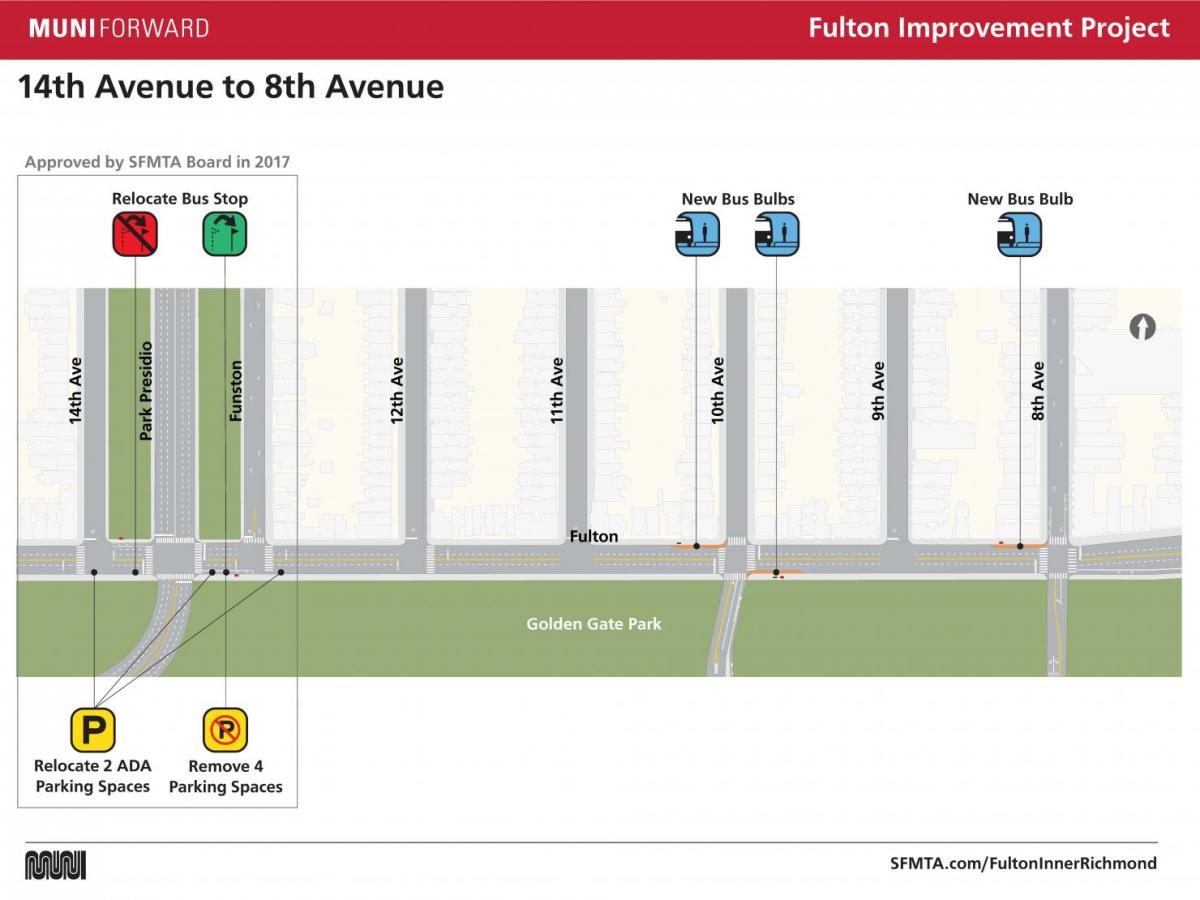 Improvements for 14th Avenue, Park Presidio Boulevard and Funston Avenue were legislated and approved by the SFMTA Board of Directors in 2017

Past Improvements to the 5 Fulton and 5R Fulton Rapid

These improvements are the final phase of a larger, long-term project to make major improvements to Muni's 5 Fulton and 5R Fulton Rapid. Over the past decade we have made a series of improvements to both routes, including: 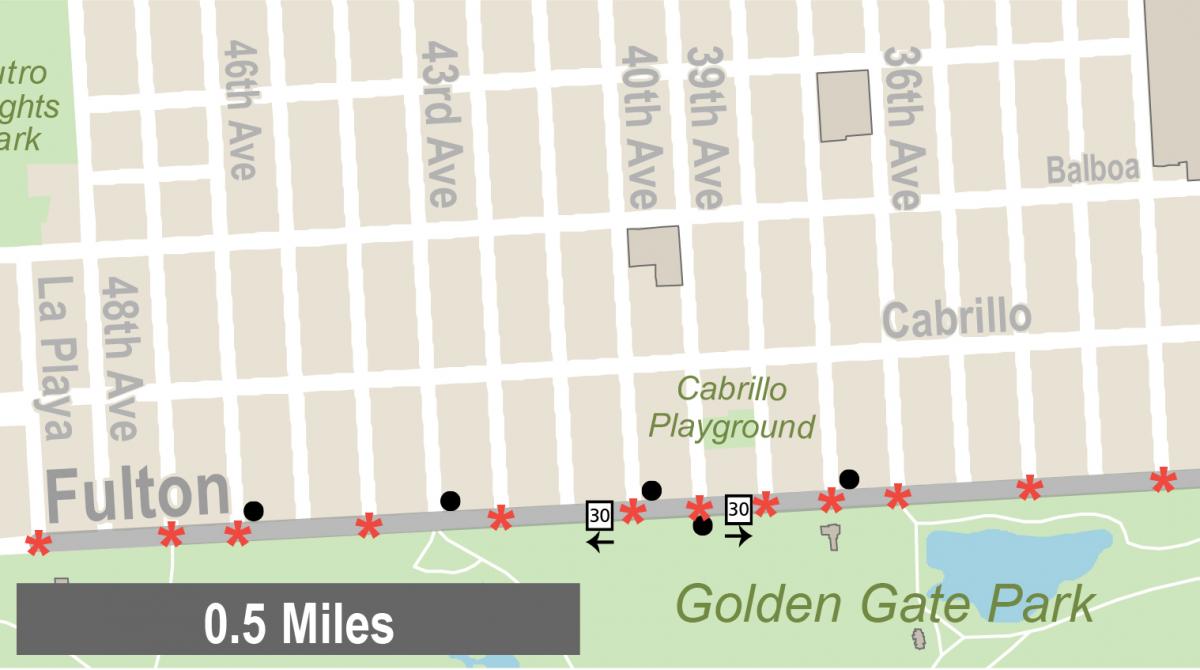 Initial Plan for the Fulton Street Safety and Transit Project 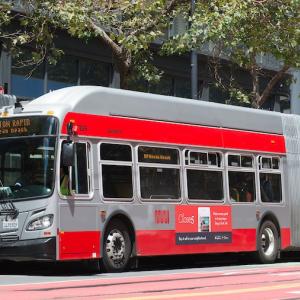 High Five for the 5 Rapid