Thank you to everyone who provided feedback on the two proposed design options. The survey has been closed. We received 100 survey responses during the December 2021 neighborhood outreach. The majority of respondents preferred bus bulbs (53-56%) to raised crosswalks (30-33%), with some respondents not liking either option. The responses were from local residents and the results were very similar for both locations. Learn more about what we heard and see the detailed survey results.

Based on this feedback, we are recommending Option A for both 14th Avenue (westbound) and Funston Avenue (eastbound).  These proposals will be included in the detailed project drawings as part of the larger Geary Boulevard Improvement Project for further input. The block-by-block project drawings will be available soon on that website, where you can learn how to share your feedback on the detailed design. 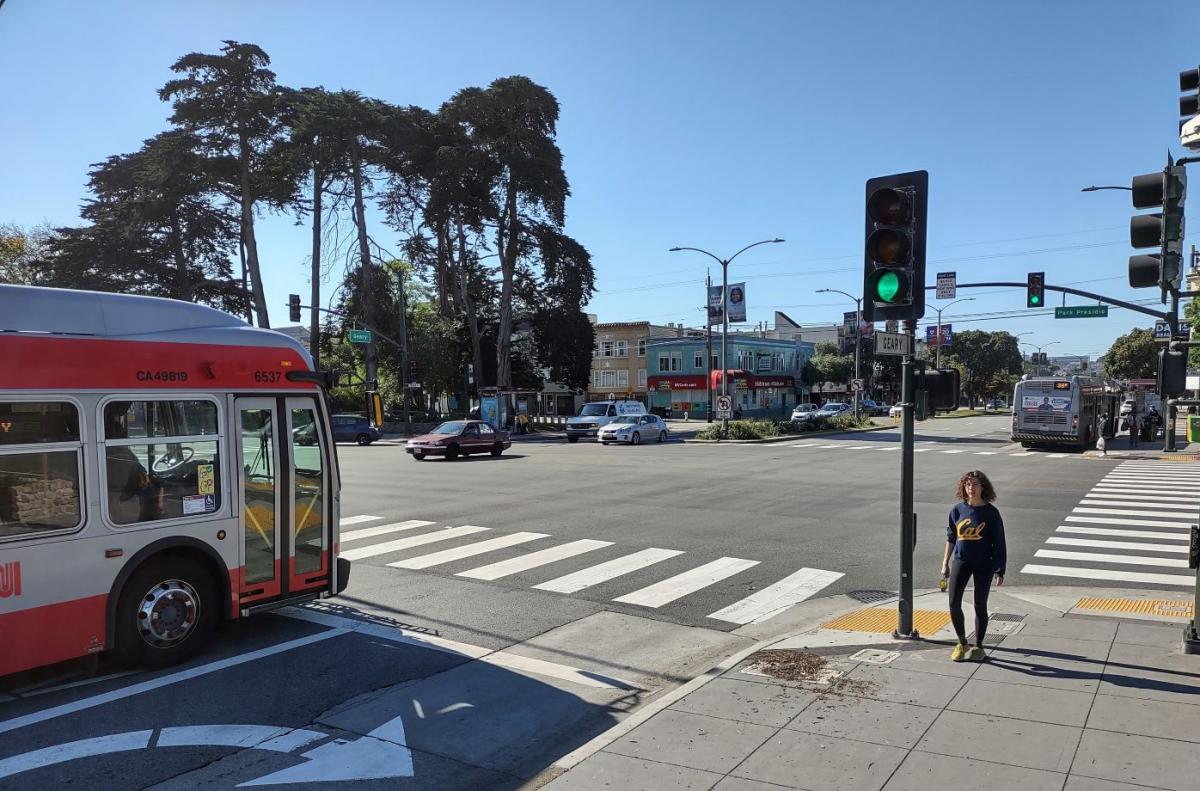 As part of the Geary Boulevard Improvement Project, the San Francisco Municipal Transportation Agency (SFMTA) is proposing changes to improve transit performance at the inbound and outbound bus stops on Geary Boulevard at Park Presidio Boulevard.

The existing street configuration only provides enough room for one bus to stop in these locations at a time, but SFMTA’s standards call for enough space for two buses to be able to stop at the same time at busy stops such as these. With the existing configuration, when two buses arrive at the same time, the second bus often waits for the first one to finish loading passengers before it can stop, creating delays for Muni customers. The SFMTA has developed two potential options for neighbors to consider, both of which would increase bus loading space.

Compare the two options below and tell us which one you prefer. 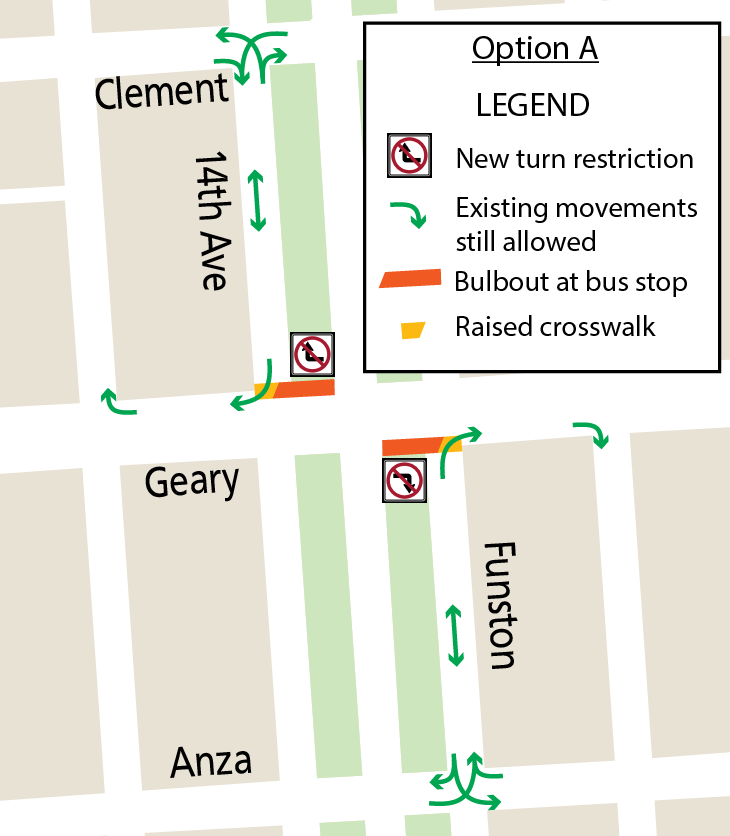 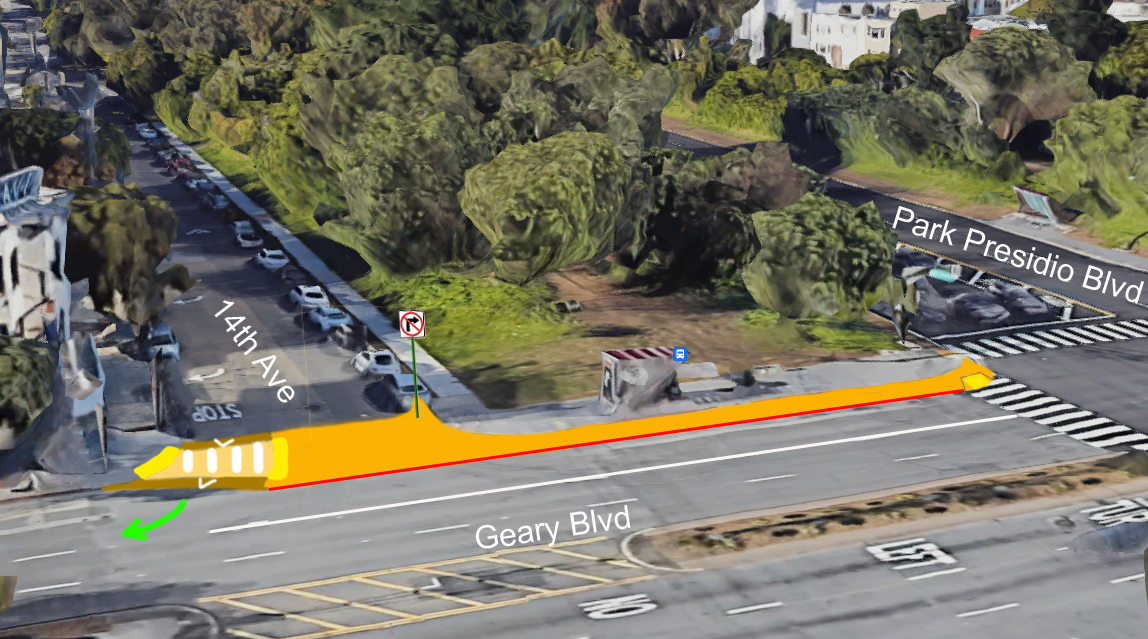 Option A – Rendering shows the proposed treatments at the outbound bus stop at 14th Avenue as an example, including an extended sidewalk (shown in orange), a partial raised crosswalk (beige) and a right turn restriction.  Option A for the inbound bus stop would include the exact same treatments at Funston Avenue, a mirror image. Additional angled parking is not drawn in this rendering but would be included in Option A. 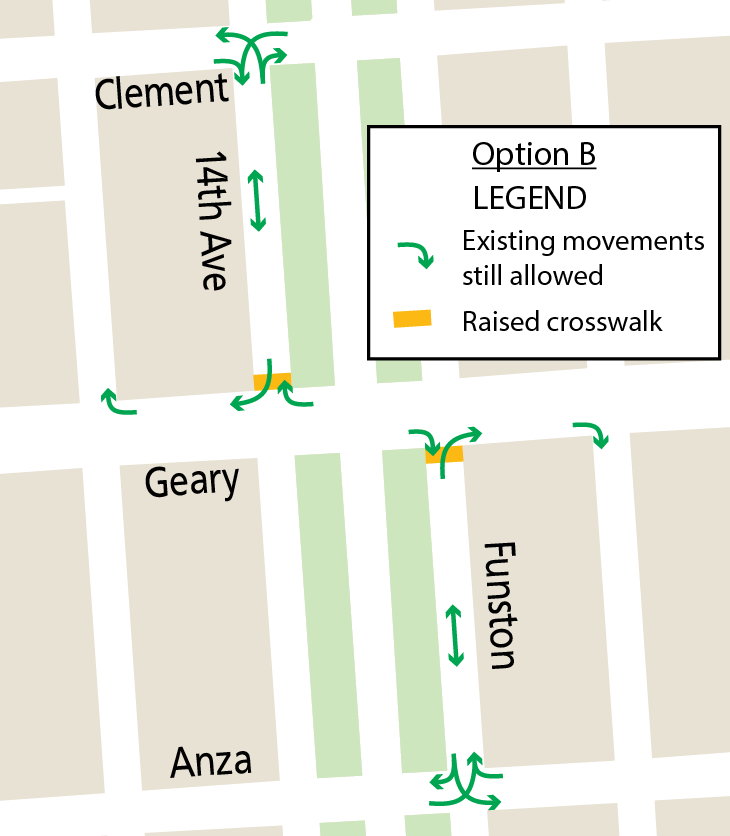 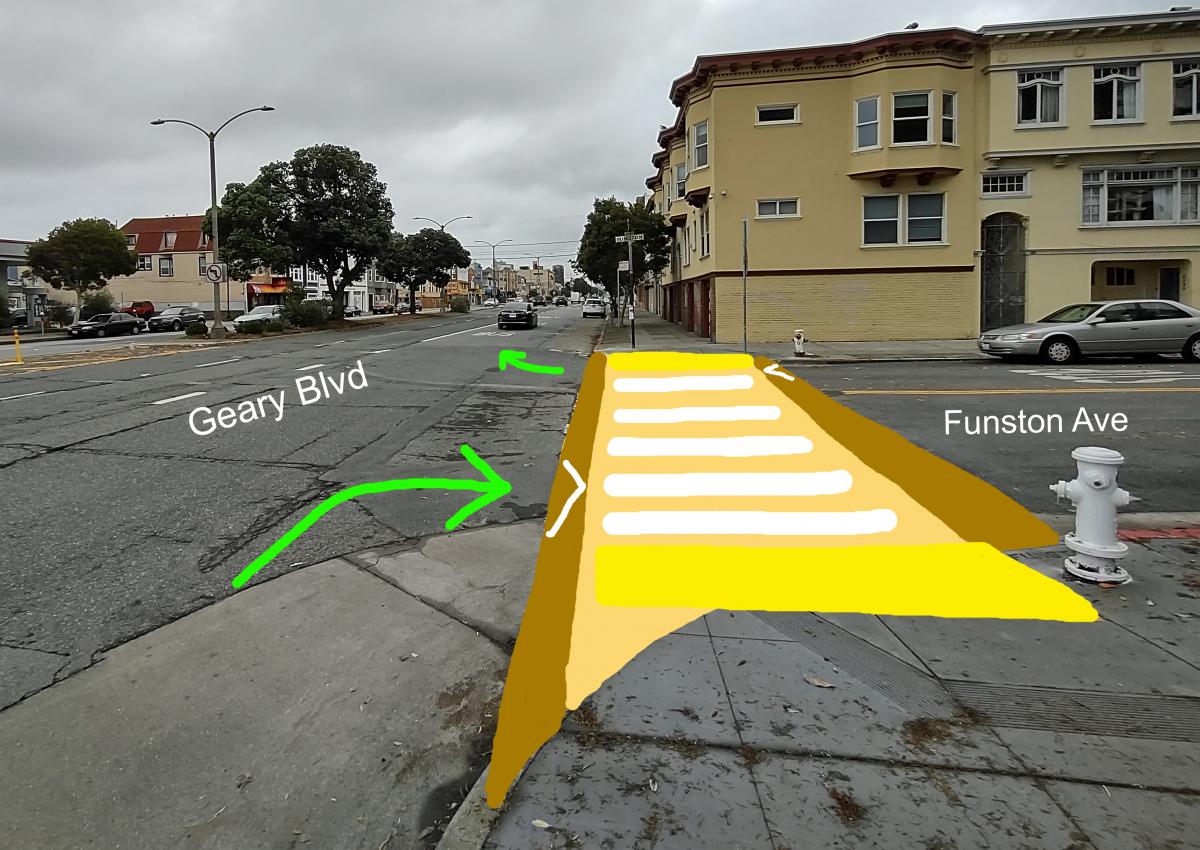 Option B – Rendering shows the proposed treatment at the relocated inbound bus stop at Funston Avenue as an example, including a raised crosswalk (shown in beige) without any turn restrictions.  Option B for the outbound bus stop would include the exact same treatment at 14th Avenue, a mirror image.

SFMTA staff recommend Option A, which provides greater transit and safety benefits. However, we want to know which option is most preferred by local residents who would be impacted by the changes to inform our final recommendation that would then be considered by the SFMTA Board for approval.

Learn more about proposed changes and share your feedback by:

Counts during peak weekday hours in October 2021 confirmed that most people transferring travel between the Sunset and Inner Richmond/Downtown, and therefore transfer from the 28/28R inbound/northbound to the 38/38R inbound/eastbound, and from the 38/38R outbound/westbound to the 28/28R outbound/southbound. 120 people were observed making these transfers versus 46 traveling between Outer Richmond and Sunset. This matches the time-of-day ridership data available.