Thank you to everyone who provided specific feedback on the detailed project design.

We have finished reviewing and synthesizing all the feedback received and have published an Outreach Summary that details what we heard. The project team is now considering refinements to the project proposal to respond to feedback heard. We will continue to provide updates between now and when the project pursues approvals later this year.

The SFMTA has been working to implement the Geary Bus Rapid Transit project to improve transit and safety since the completion of the project’s environmental phase in 2018. The first phase of work, called the Geary Rapid Project, began implementation in late 2018 and was completed on schedule and on budget in fall 2021. The second phase of work, called the Geary Boulevard Improvement Project, is between Stanyan Street and 34th Avenue in the Richmond and proposes to improve Muni’s 38 Geary bus service and address traffic safety.  In fall 2021, the SFMTA held an online open house and asked neighbors what their priorities are for Geary. Thanks to input from community members in this first round of outreach, the SFMTA has used this feedback to draft the detailed project design which includes “side-running” transit lanes. In Spring 2022, we published block-by-block drawings of the corridor and conducted a second round of outreach to seek feedback on the detailed design. We reviewed and synthesized all the feedback received and published a Round 2 Outreach Summary that details what we heard. The project team is now considering refinements to the project proposal to respond to feedback heard. We will continue to provide updates between now and when the project pursues approvals.

Learn more about the key project proposals (from Outreach Round 2 in spring 2022): 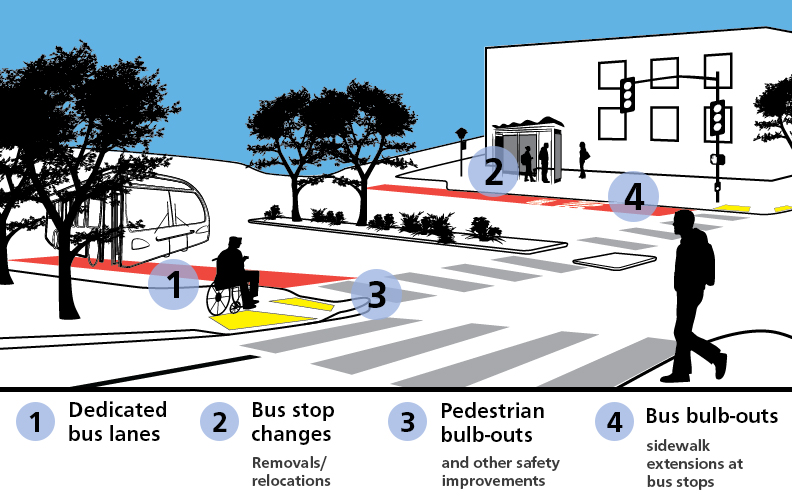 The project schedule will be finalized after project approvals anticipated in later 2022, but is expected to include:

A side-running project allows transit and safety benefits to begin sooner. After project approval by the SFMTA Board, transit lanes, bus stop modifications and safety improvements could be implemented over the course of a couple months. With a center-running project, transit lanes cannot be operational until the project is completely designed and built, a process that is more costly and can take several years with greater construction disruption. Additionally, with a side-running alternative both Rapid and local service can remain, while center-running requires Rapid and local service to be consolidated since buses would not be able to pass one another in the median transitway. Learn more about the decision to pursue side-running transit lanes.

3. How would new transit-only lanes be enforced?
Muni buses are equipped with dashboard cameras that can cite vehicles parked in bus stops and transit-only lanes. However, moving violations cannot be cited due to state law, so enforcement would rely on traditional methods.

4. How does this project improve transit performance?
Muni customers riding the 38 Geary and 38R Geary Rapid bus lines currently experience gaps in service due to inconsistent delays to buses. This can contribute to crowding and slower travel times. The SFMTA has been working to improve bus service for customers through service adjustments and roadway projects such as the Geary Rapid Project between Market and Stanyan streets and the Geary Boulevard Transit Lanes in parts of the Richmond. The Geary Boulevard Improvement Project aims to further improve bus performance over 10% by extending the existing transit lanes through the Richmond and colorizing them red, optimizing bus stop locations, constructing concrete sidewalk extensions at 38R Geary Rapid bus stops and installing some right-turn pockets to reduce conflicts with turning vehicles. These changes all work together to provide a faster and more reliable ride.

5. How does this project improve safety and accessibility for people walking?
The Geary Boulevard Improvement Project is a critical component of the City’s Vision Zero goal to eliminate all traffic deaths. This segment of Geary is on the High-Injury Network – the 13% of city streets that account for 75% of severe and fatal collisions. From 2010 to 2021, there were 437 injury collisions with 578 people injured and 5 people killed on this segment of Geary Boulevard from 34th Avenue to Stanyan Street, 145 of which involved pedestrians. This means, on average, each month one person walking is injured in a traffic collision within the project area. This represents a disproportionately higher collision rate relative to the rest of San Francisco.

The Geary Boulevard Improvement Project aims to improve safety for people walking by redesigning intersections to make them safer, introducing new pedestrian bulb-outs, daylighting and expanded medians. In addition, traffic signals will be retimed and coordinated throughout the corridor to provide more time for people of all abilities to cross safely, including near senior centers. Left-turn restrictions at some intersections would reduce conflicts between vehicles and people walking, and improve traffic safety by increasing driver visibility and providing larger center median pedestrian refuges.

6. What are the overall parking impacts?
Parking loss is a trade-off for better bus service and safer streets for people walking. These goals would be accomplished mostly by:

To help offset this loss, additional parking could be added to some side streets by converting some parallel parking near Geary to angled parking, thereby reducing the width of the driving area (two trucks could still pass).

We have also heard from small businesses about the importance of maintaining customer access to their storefronts. In response, we’re proposing parking policy changes that could help increase parking availability for people visiting businesses or other short-term trips. Some of this can be achieved by curb space changes, such as adding more passenger or commercial loading zones, to meet the needs identified in a loading survey completed by merchants. We are also proposing to add evening (6-10 p.m.) and Sunday (noon-6 p.m.) metering on Geary in Central Richmond between 14th and 28th avenues with no time-limit during these new periods so vehicles could park there until the morning. This would help to improve parking availability for businesses, but would mean free parking at meters wouldn’t start until later in the evening. Parking meters, especially in commercial areas, are the most effective tool we have to manage parking in high-demand areas. The proposed extended hours can help support increased business activity and make parking spaces easier to find for everyone.

7. When would construction start and how long would it last?
A side-running transit lanes project focuses construction at only spot locations where items like bus or pedestrian bulbs would be installed. Some Quick-Build benefits—such as transit lanes, bus stop changes and painted safety zones—could be installed within a couple months after the project is approved. Then, after the detailed design is completed, construction is estimated to take about two years, depending on whether other City agencies join the project to coordinate any State of Good Repair utility upgrades at the same time as transit and safety improvements. If so, construction would be similar to the Geary Rapid Project, which had an approximate 2.5-year construction duration including water, sewer and paving scope.

8. Could Geary be upgraded to rail service in the future?
The ConnectSF Transit Investment Strategy calls for investment in a Geary-19th Avenue subway to provide fast, high-capacity service and improve regional access, but would take more than a decade to deliver at minimum. A side-running bus lane project would complement such an investment by providing needed transit benefits to this busy corridor much sooner for a relatively low cost. In addition, the alignment and stations of a Geary-19th Avenue subway have not yet been determined, but are not expected to serve the entire length of the Geary corridor. Therefore, Geary bus service would continue to have importance in connecting the western Richmond District to any future rail, and buses would likely retain high ridership as a surface-level alternative, similar to the 14 Mission buses above BART.

9. Are there any plans to make transit or safety improvements west of 34th Avenue?
The Geary Boulevard Improvement Project does not have any scope of work west of 34th Avenue. For general suggestions, please use SF311. For traffic calming requests on side streets, visit the Residential Traffic Calming Program webpage. The sewer and water utilities under Outer Geary were recently rehabilitated and the roadway repaved.

11. Are there any benefits for people riding bikes?
Geary is a wide street and serves high traffic volumes, therefore parallel corridors (such as Anza Street) are better for east-west bike routes. Geary Boulevard Improvement Project bicycle improvements focus on people biking across Geary along north-south bike routes including 8th, 15th, 23rd and 34th avenues. These improvements include daylighting and advanced limit lines, as sharrows have already been installed. 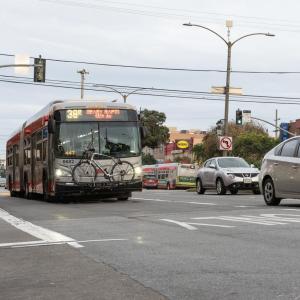 Share Your Feedback on Geary Boulevard's Transit and Safety Improvements 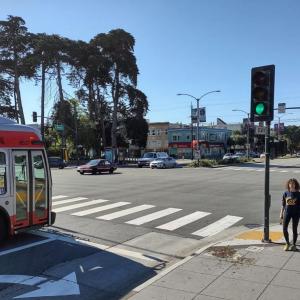