Round two in this month's Muni Lines blog series focuses on a true legacy of a line, what Muni riders today know as the 14 Mission and 14R Mission Rapid. Not only is the 14 one of the oldest lines in our system (it turned 120 in 2014!), it has followed essentially the same path on one of the city's longest streets since it first opened in the late 1800s. It is a true lifeblood transit line serving quite a diverse spread of neighborhoods from skyscrapers on one end to what some would call the 'burbs at the other. 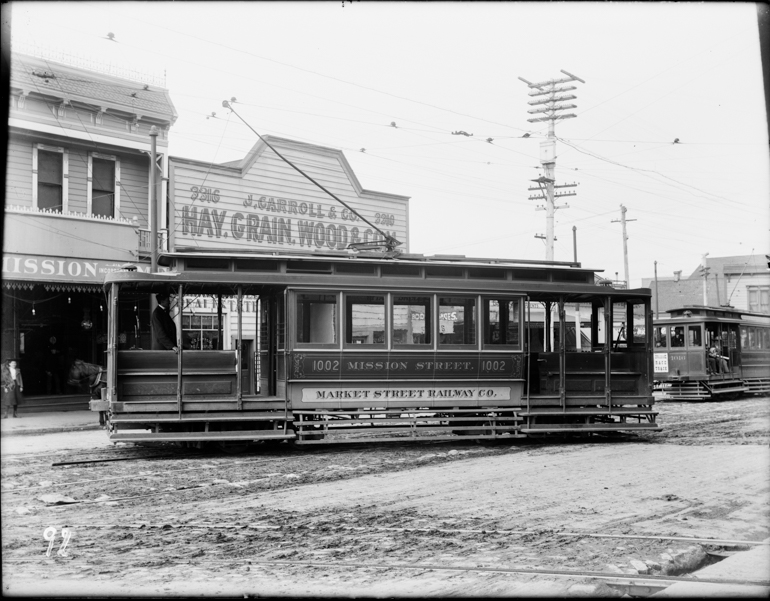 The 14 Mission's ancestry dates back to 1894 when the first Mission electric streetcar line, built by the Market Street Railway Company of 1893-1902, opened service on September 15th.  The first leg on the route took passengers from the Ferry Building to 29th and Noe streets. For passengers traveling further south, a shuttle operated down Mission from 29th to Excelsior (then called China Avenue). At this time, the outer reaches of the line (and city) were still quite undeveloped but this streetcar line made it possible for people to move further from the downtown core, allowing for the city's expansion. The shot above is one of our earliest taken on the route of Streetcar 1002 making the turn at Mission and 29th Streets in 1904. 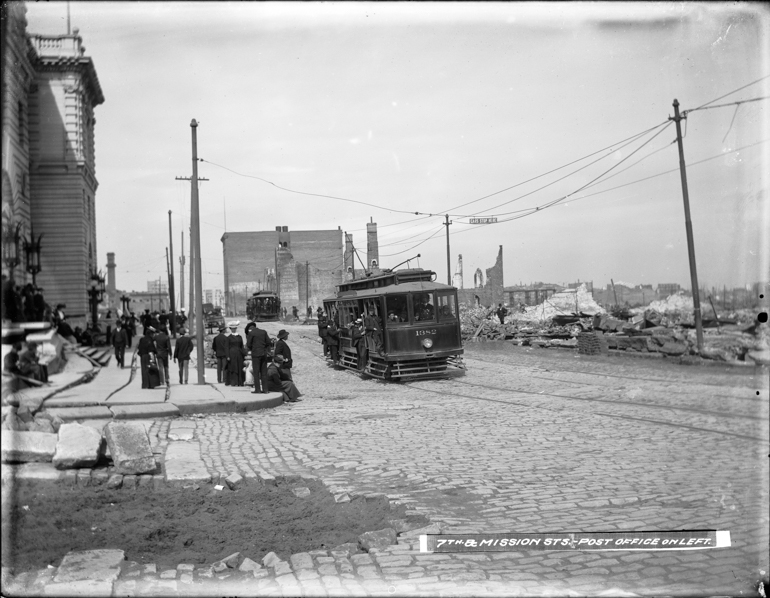 Streetcar 1382 with Passengers in Earthquake Damaged San Francisco in Front of the United States Post Office | May 9, 1906

Following the devastating 1906 Earthquake and Fire, the Mission Street line played a vital role in getting the city back on its feet. This photo, taken just three weeks after the disaster on May 9, 1906, shows a car overflowing with people passing the US Post Office at 7th and Mission streets. Access to the postal service and to jobs downtown was crucial for people trying to reconnect with family and friends and rebuild their lives. 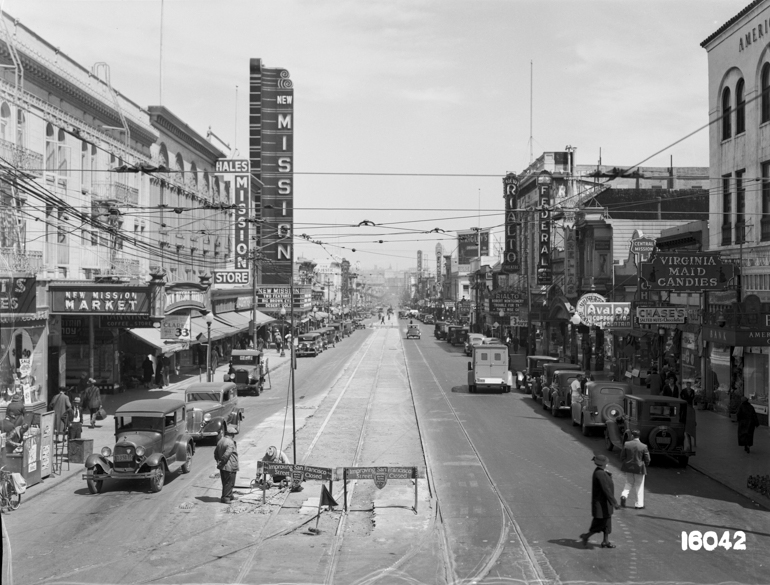 The line ran on steadily for another 30 years until it underwent a major rebuild in 1935-36, as depicted here. New tracks were installed from 16th all the way to Daly City, surely improving the roadway and the service reliability of the 14 line streetcar. 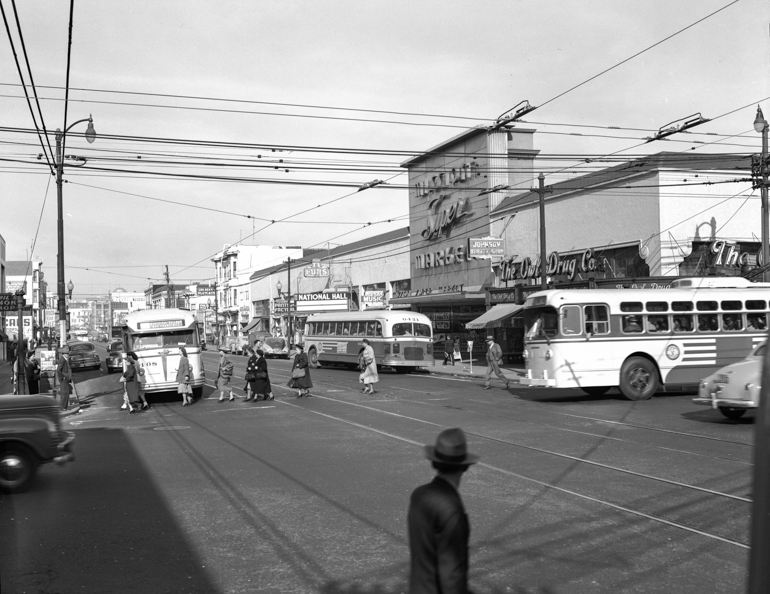 The next major change to the 14 came in 1949 when the last streetcar ran on the route, replaced at first with motor coach service then with electric trolley coaches a few years later in 1952. This shot shows Mission and 16th just 15 days after the switch to motor buses, looking to the northeast corner where the BART station entrance is today. 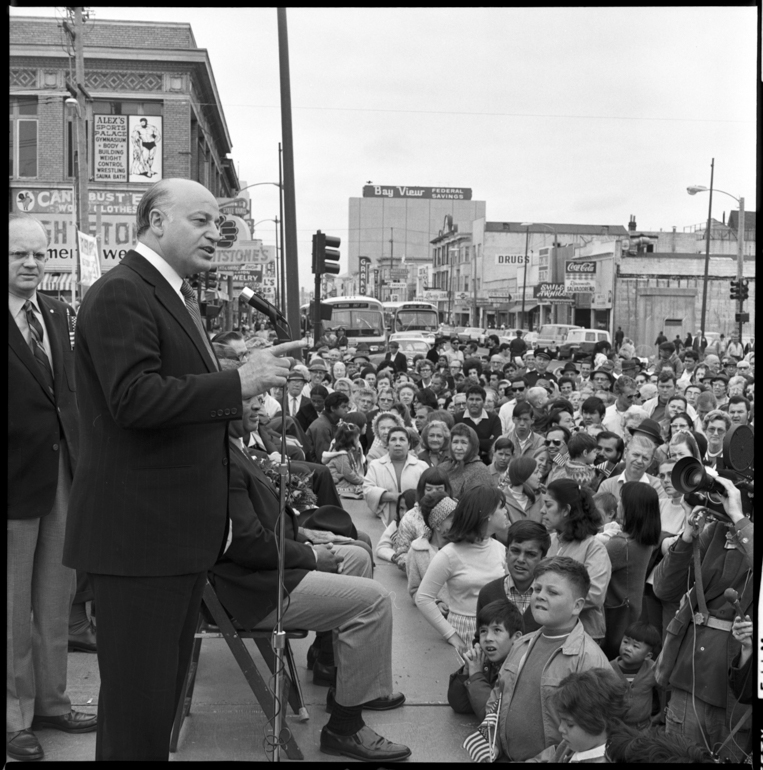 In the 1960s, BART construction along Mission Street meant that the 14 had to reroute down South Van Ness until the work was completed in 1970. The return of 14 Line coaches to Mission was celebrated with a parade and crowded ribbon cutting and tour of the BART station at 24th street with Mayor Joseph Alioto.

46 years later in 2016, the 14 will reach another milestone in it's lengthy history with work soon to begin on Muni Forward's 14 Mission Rapid Project. This project seeks to redesign the corridor to prioritize the 14, 14R, and 49 coaches as well as making much needed upgrades to pedestrian safety with new crosswalks and signaling. 122 years old and going strong, the 14 Mission will certainly continue to be one of our city's most important and heavily travelled transit lines long into the future.

Stay tuned for more Muni line histories to come on this blog and check out the great historic photos we'll be posting on Twitter, Facebook and Instagram as well as the Muni line galleries we're unveiling over the next month on the SFMTA Photo Archive website!