In January, along with other proposed and planned key locations across the city, the SFMTA Board of Directors approved temporary emergency transit lanes for the 4th Street Bridge.  These temporary lanes address a key bottleneck that delays the T Third line on 4th Street northbound and southbound between Berry and Channel Streets. 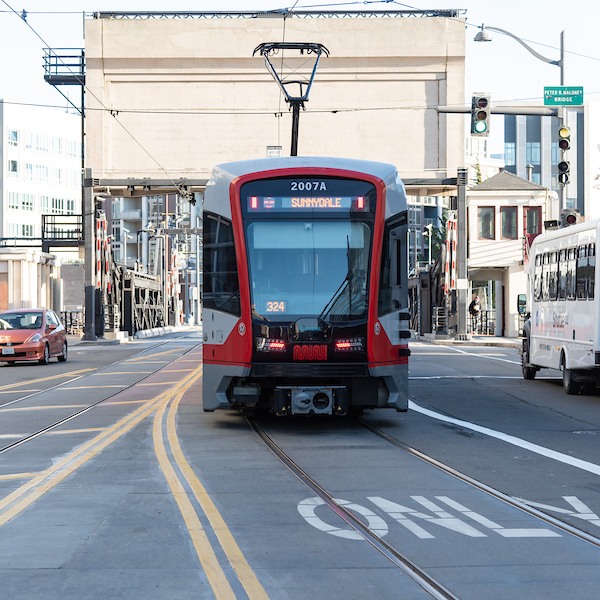 As a response to community feedback, the project team developed a two-phase implementation of the temporary transit lanes to allow for an evaluation of their effectiveness before fully restricting northbound bridge traffic.

The initial evaluation of the first phase has been completed, and data shows that partial implementation was effective in allowing Muni trains to travel across the bridge with little delay.

Currently, northbound left turns are restricted from 4th Street onto Berry Street. The previous left turn pocket at that location was converted to a temporary transit lane, while northbound through-traffic continues to be allowed on the bridge. As the city emerges from the public health order to less restrictive tiers, we will perform an additional evaluation of the existing Phase 1 implementation. If that analysis determines that northbound private vehicle traffic on the bridge has begun to cause delays to the T Third, the single northbound lane will be restricted temporarily to transit only between Berry and Channel Streets as a second phase of the project.

A summary of this phased approach is provided below.

Phase 1: Complete. Evaluation of this phase began after the T Third resumed service in late January:

Phase 2: If a change in emergency order tiers shows that traffic is causing transit delay on the 4th Street Bridge:

Evaluation of the phased approach

Our Phase 1 evaluation included site visits and several weeks of monitoring traffic on and around the 4th Street Bridge. Our chief metric was whether general traffic blocked trains on the shared northbound lane across the 4th Street Bridge.  If northbound traffic blocked trains more than 5% of the time, our plan was to implement Phase 2. Periods of evaluation included morning, mid-day, and afternoon/evening peak.

We also monitored train travel times using location data from T Third train tracking devices to identify when trains experienced the longest travel times on the 4th Street Bridge. Because this data showed few instances when trains were blocked by northbound traffic, we paused implementation of the second phase.

Our data demonstrated that Phase 1 was successful in decreasing transit delays and protecting trains from traffic congestion. With the temporary emergency transit lanes in place:

For additional information on this project, and to sign up for updates, check out the 4th Street Bridge Temporary Emergency Transit Lanes webpage. 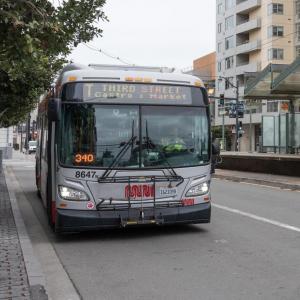