Skip to main content
ATTN: IB #FMarket blocked at Market and Dolores by a stalled semi-truck. OB F will switch back at Market & 11th. Us https://t.co/IuoUKmO3RO (More: 9 in last 48 hours)
Subscribe 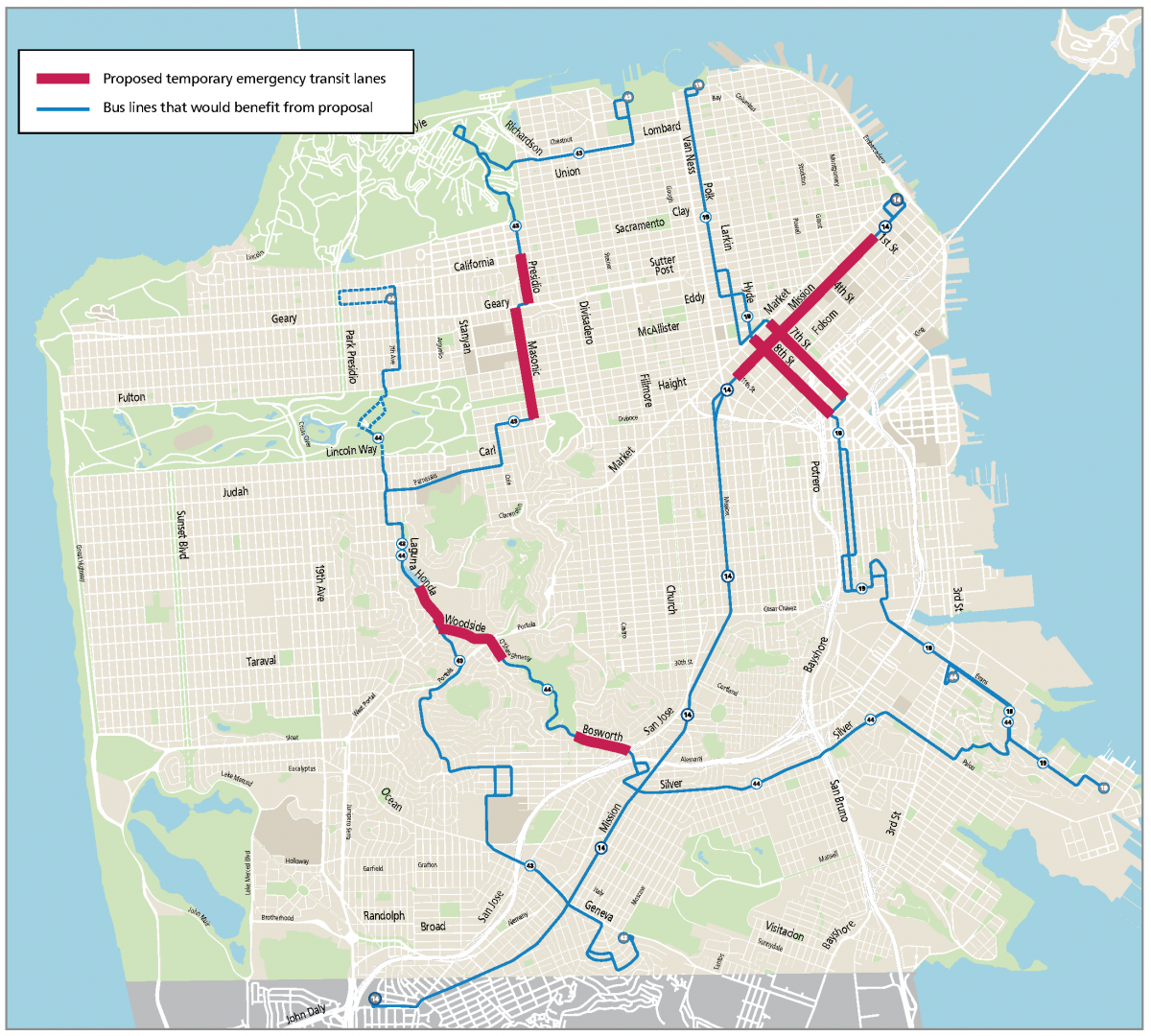 We don’t have a crystal ball to see into San Francisco’s future, but one thing is clear: a citywide economic recovery is dependent in large part on a transportation recovery. And while we work to come back from one crisis, we’re looking to avert another—traffic gridlock.

With hundreds of thousands of people dependent on transit to get around before COVID-19, our city is uniquely vulnerable to increased congestion. Congestion is already on the rise, and some studies are predicting that people may turn increasingly to private vehicles, turning the streets into a “Carmageddon” for both cars and transit. Our city’s streets simply don’t have room for more vehicles.

At the same time, COVID-19 has impacted our ability to provide Muni service. Service levels depend on the availability of operators, car cleaners, maintenance staff and other personnel to operate the system and support expanded cleaning protocols. To support physical distancing, our buses can only carry one-third of the number of passengers as they could before the pandemic. And, severe revenue cuts are also taking a toll. We estimate that we may only be able to provide 70% of pre-COVID-19 Muni service hours next year. If buses get stuck in traffic, that number could be even lower.

We need to ensure that transportation works for those who don’t have the privilege of working from home or using a private vehicle. Now more than ever, Muni is serving those riders who have no other options and are more likely to be people of color or from low-income households. In order to protect people who rely on transit from increased exposure to COVID-19 on slow or crowded buses, we need to act quickly to move more people with fewer resources.

One of the most effective tools we have to improve Muni travel time and reliability are transit lanes. Dedicated transit lanes allow buses to complete trips in less time and return into service more quickly, increasing vehicle frequency and moving more people with more space to physically distance. Emergency vehicles are also able to use the lanes to bypass traffic congestion.

The benefits these transit lanes bring are critically needed for Muni customers who have no other options during this public health emergency. We recently implemented a new transit lane on 4th Street and on June 16 the SFMTA Board of Directors approved new transit lanes as part of the Active Beale Street Project.

At a special meeting on Tuesday, June 30, the SFMTA Board will consider fast-tracking temporary emergency transit lanes that would benefit five Muni routes:

If approved, these temporary emergency transit lanes would be installed in late summer and striped only with white paint, “Bus/Taxi Only” stenciling and signage. Lanes will automatically be removed within 120 days after the emergency order is lifted, unless there is a public process to make a lane permanent.

These locations were chosen based on where the benefits are greatest, on current ridership, travel time data and to prioritize routes that serve neighborhoods with high percentages of people of color and low-income households, including Ingleside, Outer Mission, Excelsior, Visitacion Valley, Bayview, Mission, SoMa and the Tenderloin.

On June 30, the Board will also consider delegating authority to the City Traffic Engineer’s Office to streamline the approval process for any future temporary emergency transit lanes. A public hearing would also be required for each corridor. The SFMTA is using travel time data to evaluate additional locations where adding temporary emergency transit lanes would achieve the biggest time savings and provide the greatest benefit. We will work with the community to evaluate and make any adjustments that are needed to the temporary transit lanes in real time based on public feedback and data monitoring. 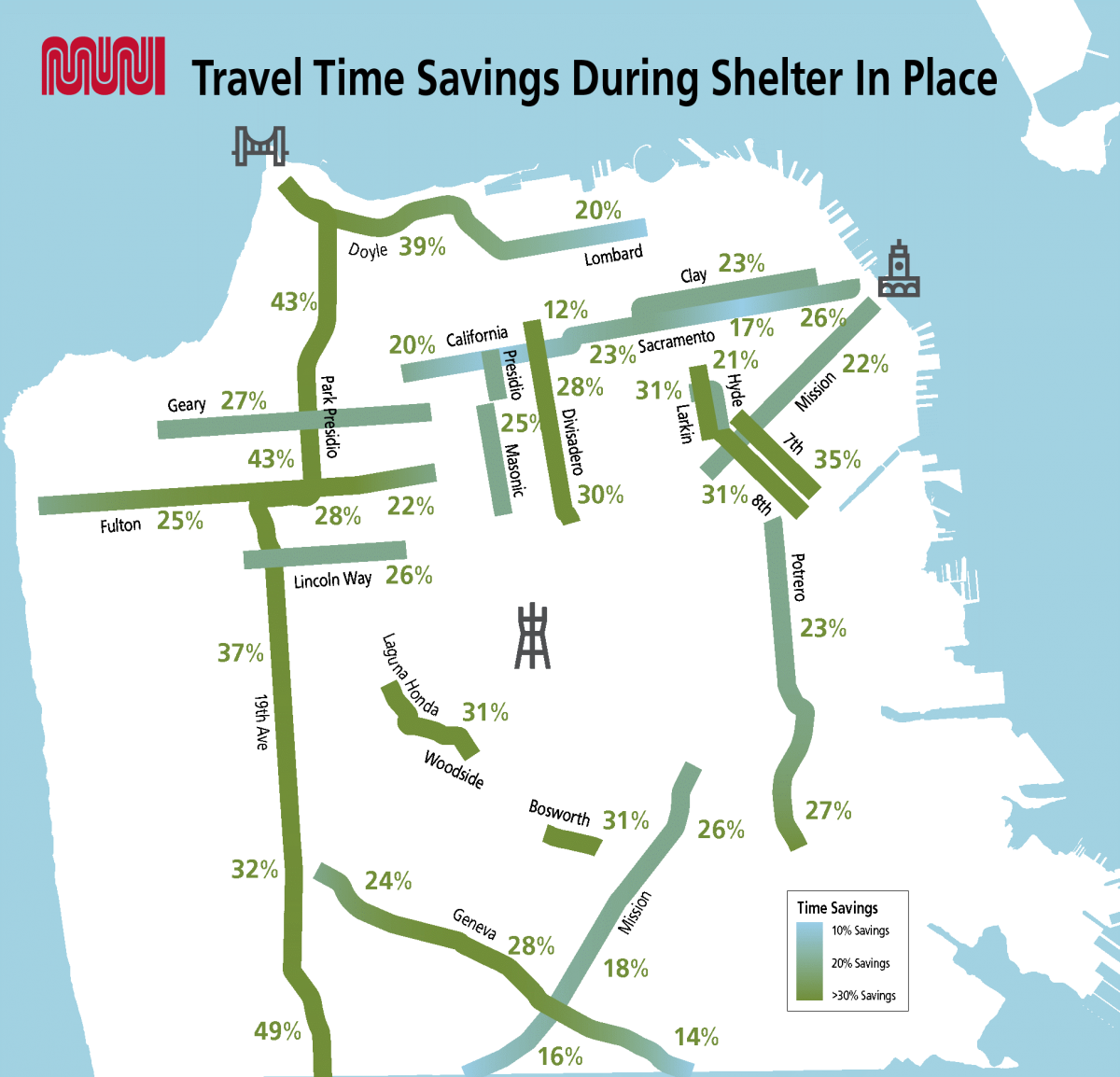 At the beginning of the shelter-in-place, we saw massive time savings on several streets that don’t currently have transit lanes (see map), including the streets where temporary emergency transit lanes are proposed. Those are gains we’ll need to maintain to protect essential workers and our future economic recovery. Meanwhile, on most streets that already have transit lanes, there was no or very little improvement with the decreased traffic—demonstrating just how effective those lanes have been.

Delivering the city we want in the future, with a transit network that seamlessly connects people to jobs and neighborhoods to neighborhoods, won’t come without tradeoffs. Temporary transit lanes will require removing some general-purpose lanes or parking in some places. As lanes are implemented we will be closely evaluating and gathering public feedback, and are prepared to make adjustments as we go—or even remove lanes—to ensure we meet the needs of the community and Muni customers.

Jun
30
Board of Directors special meeting, June 30, 2020 Due to the COVID-19 health emergency and to protect our Board members, SFMTA staff, and members of...