Share this: FacebookTwitterEmail
By
Aaron Bialick (no longer with the SFMTA)
Monday, June 12, 2017 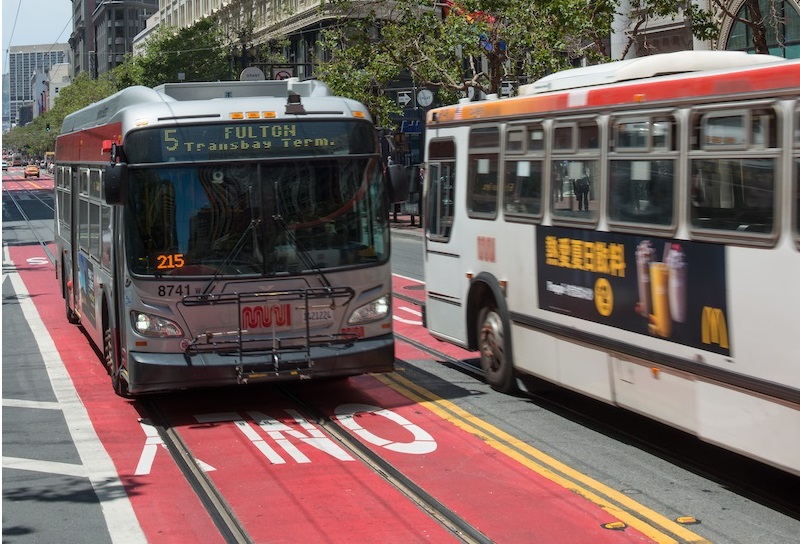 As we wrote in April, red transit-only lanes work. And now, our efforts to pioneer them have taken a step forward: State and federal agencies gave San Francisco the green light to give more transit lanes the red paint treatment.

Since red transit lanes are a relatively new tool in the United States, the ones added to those three streets were installed as an experiment sponsored by the California Traffic Control Devices Committee and the Federal Highway Administration (FHWA).

After the FHWA reviewed our Red Transit Lanes Final Evaluation Report, they accepted our request to expand the locations where we pilot the red paint treatment. That applies to both existing transit lanes and those proposed as part of projects like the Van Ness Improvement Project, the Geary Rapid Project and others in the Muni Forward Rapid Network.

This is great news for SF, and we’re excited to see that the FHWA may make red transit lanes a standard treatment, which would allow cities around the country to reap their benefits.

Check out our April blog post learn about the findings from our Red Transit Lanes Final Evaluation Report, as well as those from a study conducted by the company Zendrive, which found that the “red carpet” treatment on Mission Street led to a drop in risky driving behaviors.