On March 6, city leaders, including Mayor London Breed and Supervisor Vallie Brown, department heads and community members joined together for a ceremonial groundbreaking to mark the beginning of construction on the Geary Rapid Project.

Due to rain, the celebration was held indoors at the Buchanan YMCA, a community anchor in the area and near where a new crosswalk and median refuge will be built at Geary Boulevard and Buchanan Street. Not only will the crosswalk provide a safe crossing opportunity in a much-needed area, but it also embodies a reconnection for communities that were torn apart by redevelopment projects during the mid-last century.

Community involvement was apparent in every facet of the groundbreaking event. For instance, on arrival, guests and speakers were treated to a dance performance by first-grade students from Rosa Parks Elementary School.

Members from Japantown, St. Francis Square Coop and the Fillmore also spoke about the significance of the new crosswalk to their communities. Glynis Nakahara, a Japantown Task Force board member, contextualized the unfortunate legacy of our city’s “urban renewal” era when the area was leveled to make way for the Geary Expressway that created a physical barrier and cut off vibrant neighborhoods from each other.

Geary, as we experience it today, is a wide thoroughfare that is part of San Francisco’s high injury network, where you are eight times more likely to be hit by a car when crossing the street. The Geary Rapid Project aims to undo some of the effects of urban renewal by “calming the Expressway” with features like new surface crosswalks at Webster, Steiner and Buchanan, lane reductions and lane narrowing, removing the Steiner bridge and other streetscape amenities that will make the area more pleasant and walkable.

Future signalized crosswalk and median refuge with decorative panels at Buchanan. The design was a close collaboration between the SFMTA and local communities.

“The Buchanan Street crosswalk across the busy Geary Expressway is a significant milestone in reconnecting the two communities (African American and Japanese American) that were separated by urban renewal in the 1960s,” said Richard Hashimoto, a former Western Addition resident displaced by redevelopment and the current President of the Japantown Merchants Association and member of SFMTA’s Geary Community Advisory Committee. “The crosswalk across Geary will also provide a safe passageway across the busy street, especially for our seniors and children.”

The design was a close collaboration between the community and the SFMTA. For instance, the length of the median refuge was designed to be able to accommodate large groups of Rosa Parks elementary school students. The median will also feature decorative panels inspired and designed by the Fillmore, St. Francis Square Coop, and Japantown communities.

Glynis Nakahara introduced the panels, explaining that the symbolic bird medallions and rectangular panels represent the rich history and culture of the neighborhoods. Linda Walsh, a resident and board member of the St. Francis Square Cooperative; Karen Kai, a longtime Japantown community advocate and Brittany Ford, Director of Mo’ Magic, each spoke about their neighborhood’s medallions and panels. 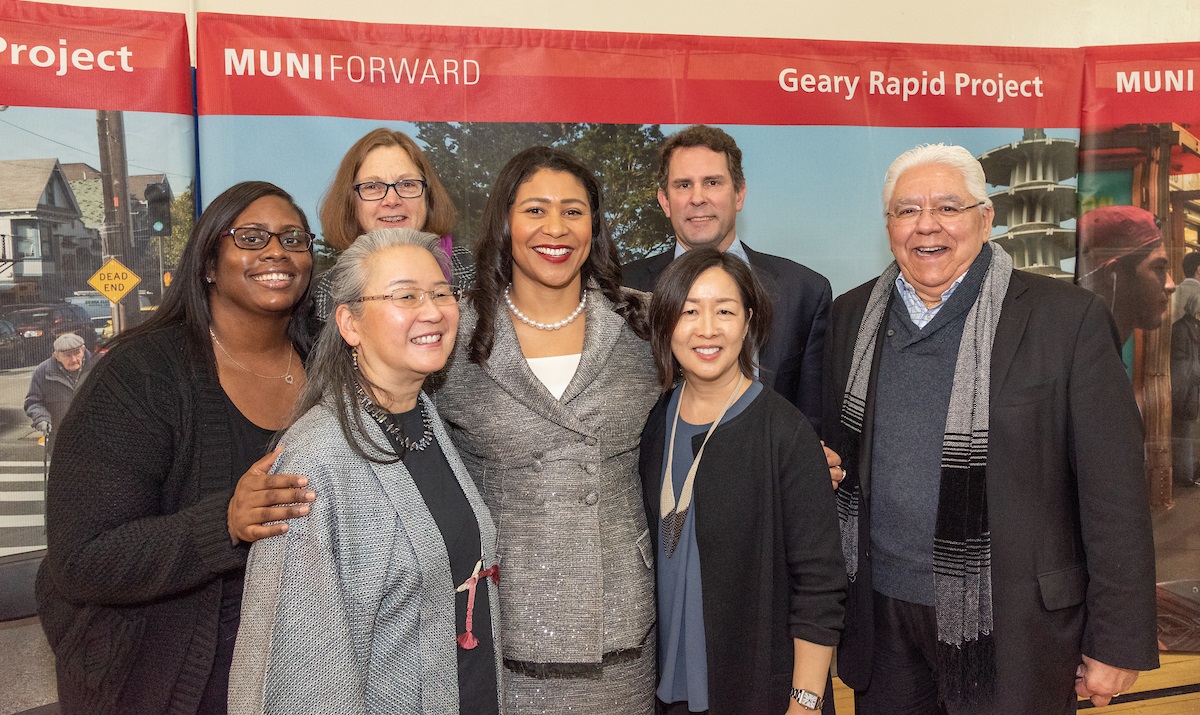 To end the event on a - literal - high note, Liz Lane, an accomplished Fillmore singer, and Japanese-American saxophonist Masaru Koga gave a stirring performance of “Lift Every Voice and Sing.” As guests departed, each was gifted with a commemorative umbrella featuring the bird medallions. 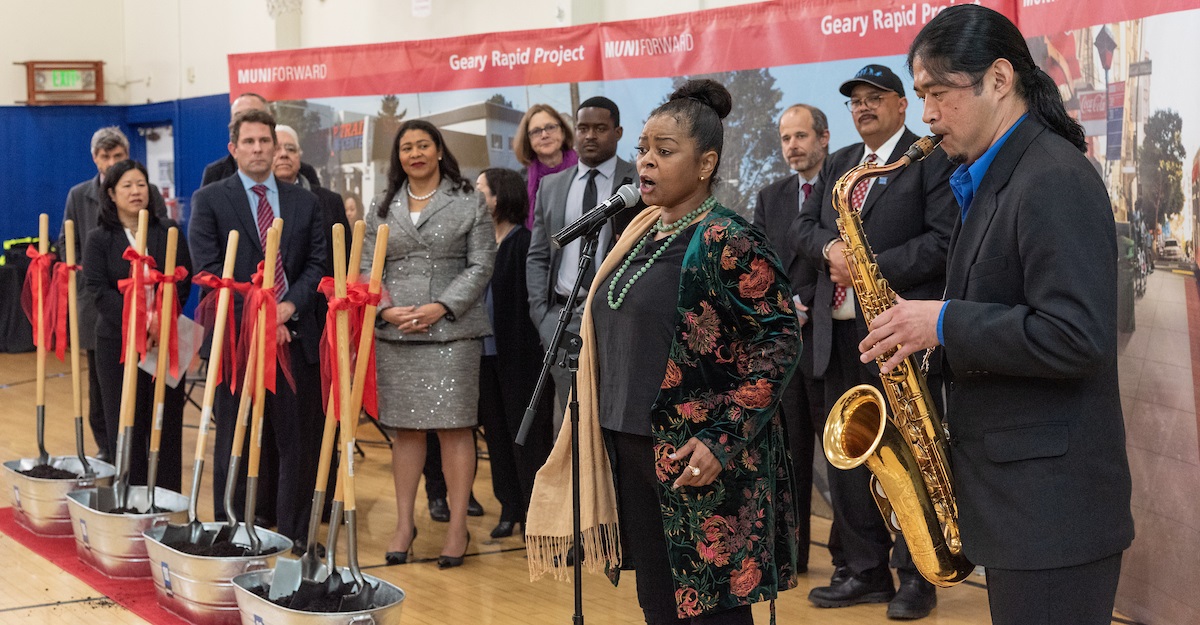 Linda Walsh noted that St. Francis Square is a housing cooperative sponsored by the International Longshore and Warehouse Union (ILWU) and the Pacific Maritime Association. Their vision was housing for people of all races and ages. Honoring the legacy of its founders, the coop named its streets after ships. To represent the coop and the union, the new Buchanan crosswalk medallion will show a seagull and the panel will display a ship at harbor.

Karen Kai remarked that the Chidori, a migratory bird, was chosen to represent Japantown and to recall the Issei, the first wave of Japanese immigrants who established the Japanese-American community. On Japantown’s panel is the Buchanan YMCA and the Peace Pagoda. The Buchanan YMCA is the first institution created by the Issei. The Peace Pagoda and its plaza, like the cherry blossoms, are enduring gifts of friendship from the people of Japan to the people of San Francisco and the United States.

Brittany Ford spoke about the rich African-American heritage of the Fillmore. The Sankofa bird, a traditional West African symbol, was chosen for the panel medallion. The border of eucalyptus leaves is a reference to Mary Ellen Pleasant, who came to San Francisco in the 1850s and established the western terminus of the Underground Railroad. She is also seated in the panel. The center figure is Charlie Parker, one of many world-class jazz musicians who performed in the Fillmore, known at the time as the “Harlem of the West.” Wesley Johnson, Sr. in the cowboy hat owned several Fillmore bars that were important community gathering places. The music staff features “Lift Every Voice and Sing,” also known as the Black National Anthem.

Read more and watch a recap of the groundbreaking.