How Muni’s Streetcar Lines Got Their Letters 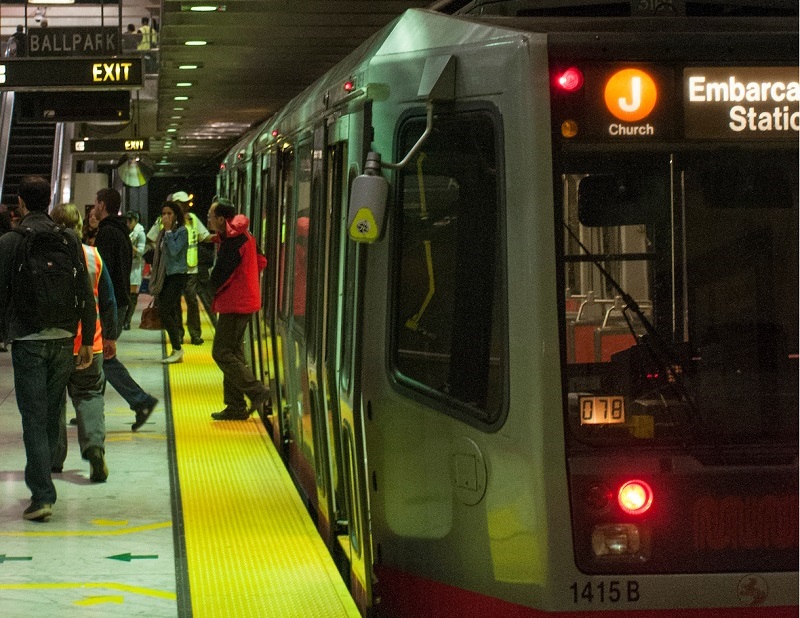 While waiting for a train in a Muni Metro station, you may have wondered: How did our five remaining streetcar lines get the letters J through N?

Muni’s rail lines did start at the beginning of the alphabet. At various times throughout the early 20th century, streetcar lines claimed the letters A through O. But as SF's rail network was removed or replaced with bus lines in the mid-century, it went from 16 rail lines to five: the J Church, K Ingleside, L Taraval, M Ocean View and the N Judah. (We launched the T Third Line in 2007 and the E Embarcadero Line earlier this year.)

The J, K, L, M and N, which opened sequentially between 1917 and 1928, were preserved because they were heavily used and shared a fundamental characteristic: they ran through sections of tunnel and exclusive rail right-of-way which couldn’t be used by buses. Thanks to the infrastructure built to navigate through and around our notorious hills, San Francisco was one of the only cities in the country to retain several of its traditional streetcar lines – and they fell right in the middle of the alphabet. (Fun fact: On our Metro Rail Operations radio system, these lines go by the names Jay, Kilo, Lima, Mary and Nancy, for purposes of clarity.)

As for the more recent T Third and E Embarcadero lines, their letters were chosen for being the first letter on the primary street of their respective routes.

When the F Market and Wharves re-introduced historic streetcar service to Market Street in 1995, it took its letter from the long-defunct F Stockton line. But the F Market owes its existence to the resilience of the J thru N lines, which ran on the surface of Market Street until they were connected to the Market Subway in 1980, preserving Market’s surface tracks.

Now, here’s a brief look at those ten other defunct lines that adopted letters A through O. Let’s start by laying out the full list (the lines we know and love today are denoted with an asterisk): 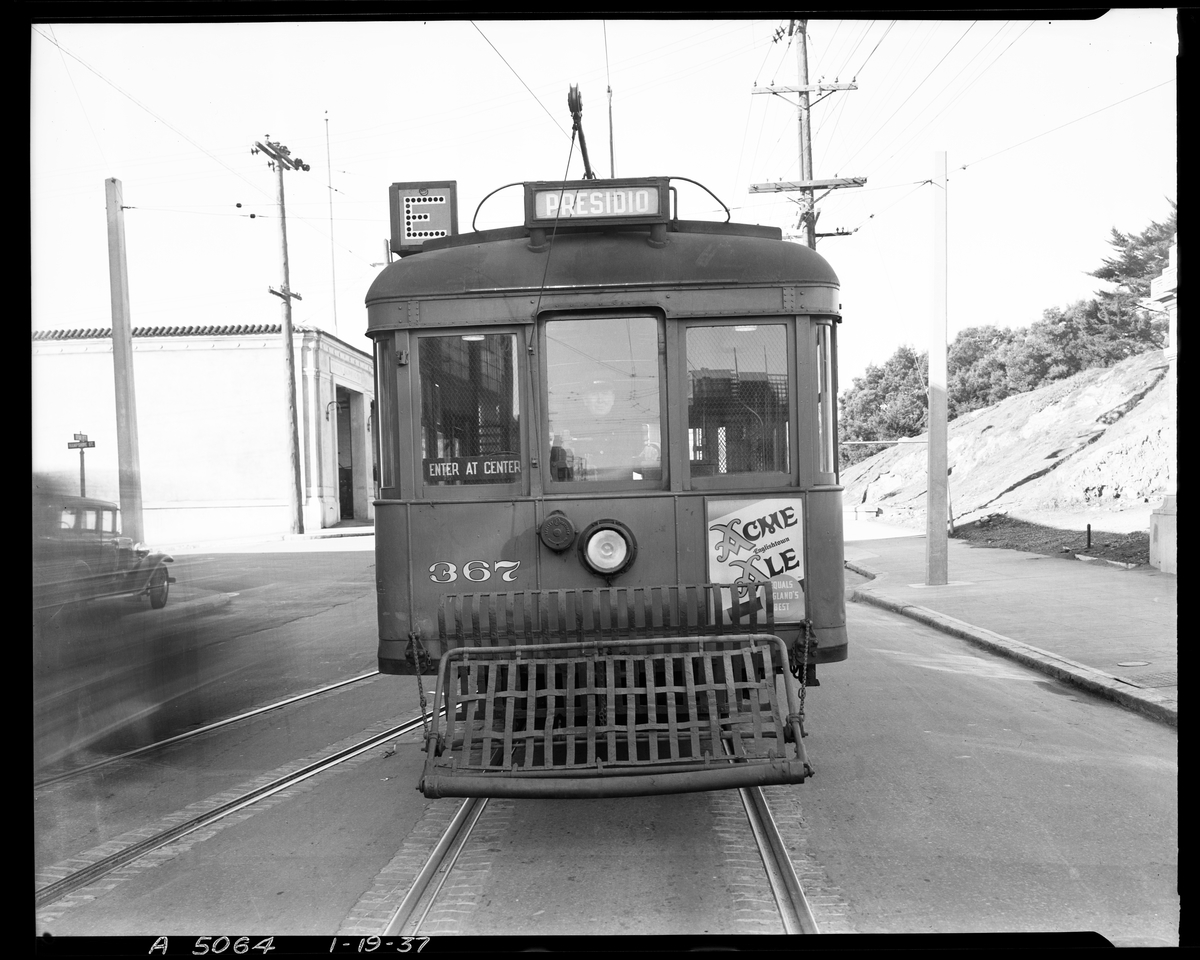 The A, B and C lines, which ran primarily along Geary Street, were the first in the Muni system. The SF Municipal Railway opened with the A and B lines on December 28, 1912: the A Geary-Park line ran from Kearny and Market to Geary and 10th Avenue in the Richmond District, and then to 10th Avenue to Fulton Street at Golden Gate Park. The B Geary-Ocean line originally served as a connecting shuttle between 10th and 33rd Avenues. Shortly after, the C Geary-California line began service along the B’s route west to 2nd Avenue, where it turned to run down California Street to 33rd Avenue.

Lines D through J were created in a flurry of rail construction around 1915 to serve the Panama-Pacific International Exposition, also known as the world’s fair, in the Marina District.

The Stockton Tunnel was built for the E Union and F Stockton lines, which are served today by electric trolley buses on the 45 Union-Stockton and 30 Stockton routes, respectively. The H Potrero-Van Ness ran from Potrero Avenue and 25th Street on Potrero, 11th Street and Van Ness Avenue to Bay Street. 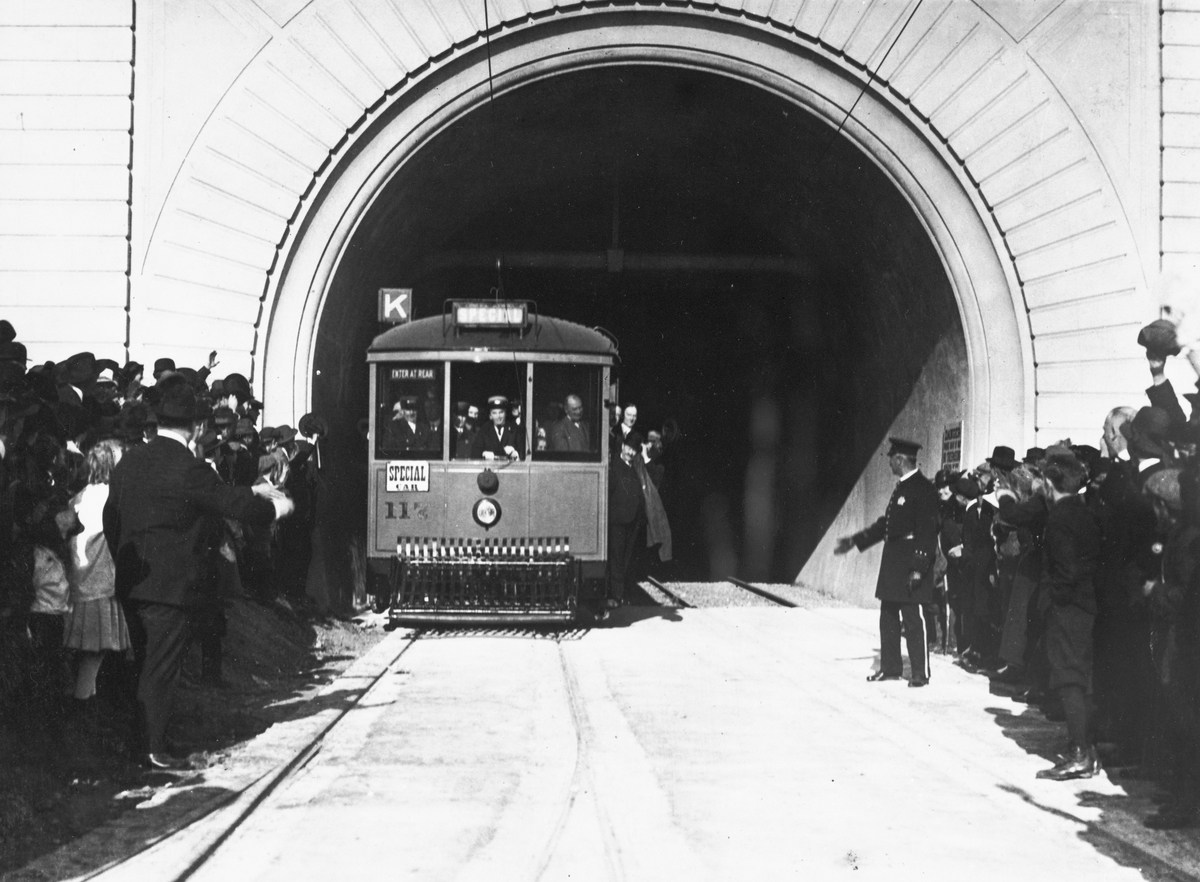 Mayor Rolph at the controls of Streetcar 117 for the opening of the Twin Peaks Tunnel on February 3, 1918.

The G, I and J were temporary lines created to serve the exposition in 1915 and 1916 (that first J line was unrelated to today’s J Church). The G ran from Market and Stockton to the Presidio via Union Street, and the I Line ran from Steiner and Union to Geary and 33rd for just three days.

The O Van Ness, another short-lived line, ran for just six weeks in 1932 along Union between Van Ness and the Ferry Building.

So, that closes the case of the missing Muni alphabet. We hope this brief history helps assuage any perplexity over Muni’s train lettering choices. And the next time you’re riding a train lettered J through N, you can thank the visionary transit engineers who built the tunnels and trackways that enshrined the streetcar lines ― and their letters ― for generations to come. 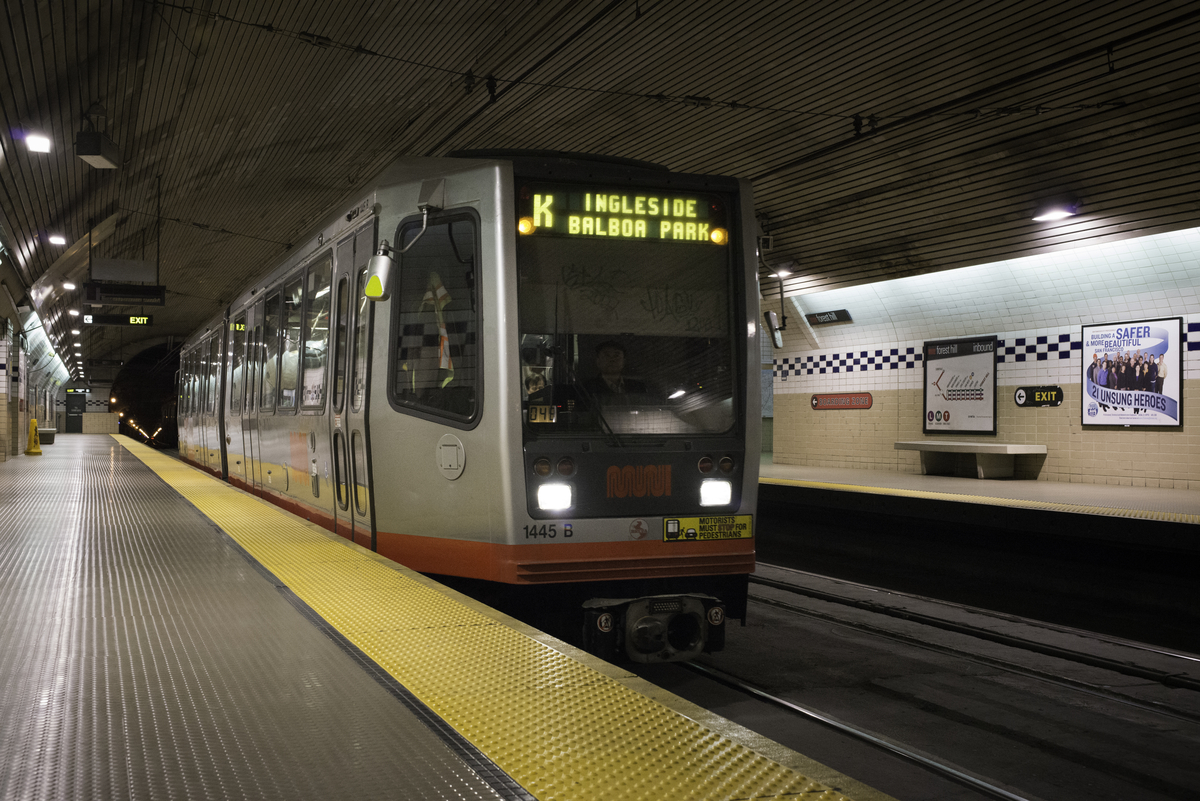