Looking back at San Francisco’s transportation history, one study from 1913 has impacted the city’s transit system for over 100 years. Commissioned by city officials, the “Report on the Improvement and Development of the Transportation Facilities of San Francisco” by engineer Bion J. Arnold, is a comprehensive study of transit in the city. The 450-page report covers everything from rush hour congestion to plans for a Market Street subway. This document is essential to understanding our city’s transportation history and some of its recommendations are still in use today. 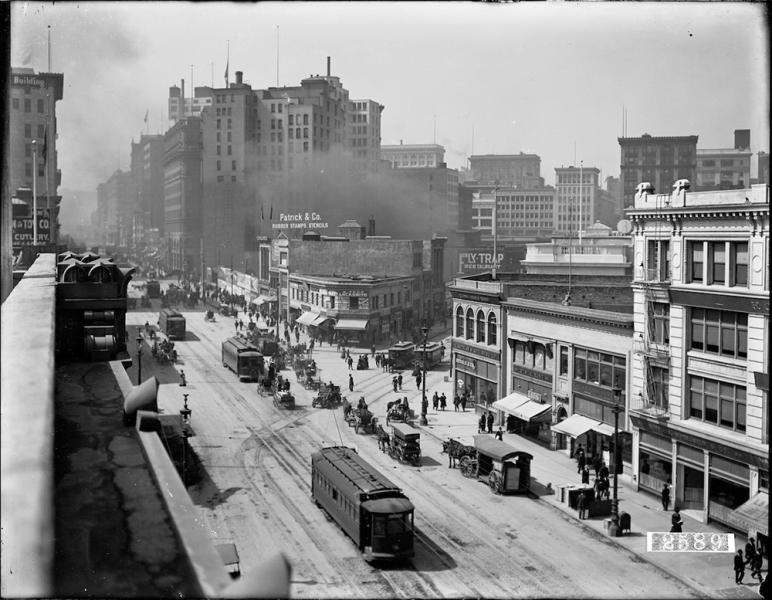 This 1910 view of Market and Sutter streets shows just some of the complex issues that the Arnold report addressed.

One section of the report is entirely dedicated to specifications for building and improving the city’s cable and street cars. Muni’s very first streetcars, frequently called “Arnold” cars, were specified based on construction cost, passenger comfort, ease of operation, and even the unique climate of San Francisco. Today, historic Streetcar 1 is one of these streetcars that still runs in special service. 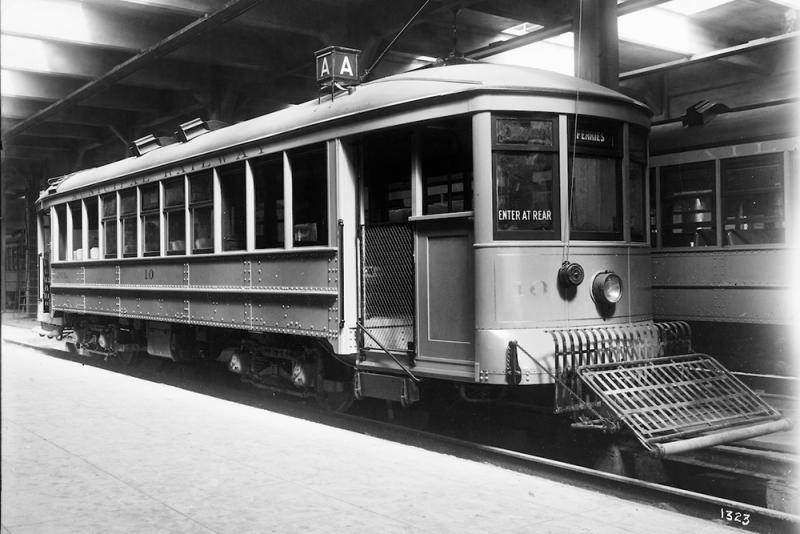 This photo of one of Muni’s first streetcars was used on page 178 of the report and shows the open end sections, boarding platforms, and “automatic” ventilation features specified by Arnold.

In addition to the vehicles, Muni’s earliest lines, and service to the 1915 Panama Pacific Exposition, were all directly influenced by the report. Versions of the A, B, C, E, F and H streetcar lines all appear in the report. It also influenced later lines like the J, K, L, and M. 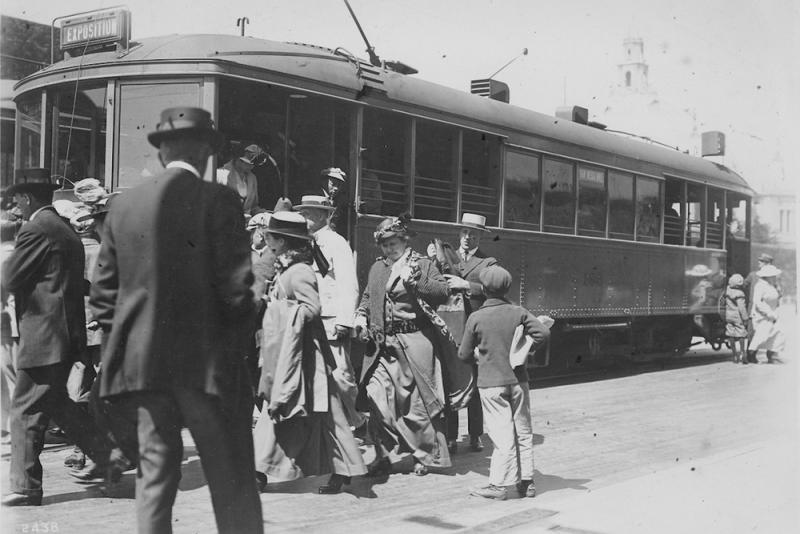 Passengers alight from a Muni streetcar at the 1915 world’s fair. Arnold dedicated an entire section of the report to discussing service to the fair, which was provided by Muni and the United Railroads Co.

The report also detailed several tunnels and street changes throughout the city meant to speed travel across town. Of the more than ten tunneling projects proposed, the Stockton Street, Twin Peaks, and Sunset tunnels were all built by 1930. The Broadway tunnel followed in the early 1950s. 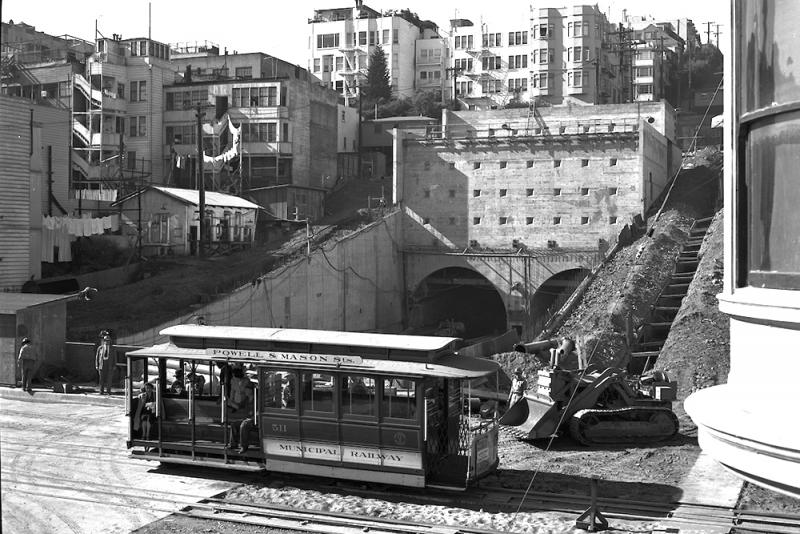 A cable car on Mason Street passes by the Broadway Tunnel, still under construction in this 1951 shot.

Among the street changes proposed, the extension of Market Street over Twin Peaks was perhaps the largest. This extension was built alongside the Twin Peaks Tunnel in 1917-18.

Arnold also called for a consolidated transit system and a subway under Market Street, both of which were achieved by the mid-20th Century.  In 1944, voters approved the purchase of the Market Street Railway Company, the largest transit operator in SF. This merger unified public transit service under Muni. Instead of navigating two competing services, riders finally had a one-fare ride to virtually anywhere in town. Consolidation also allowed improvements to be made across the system. 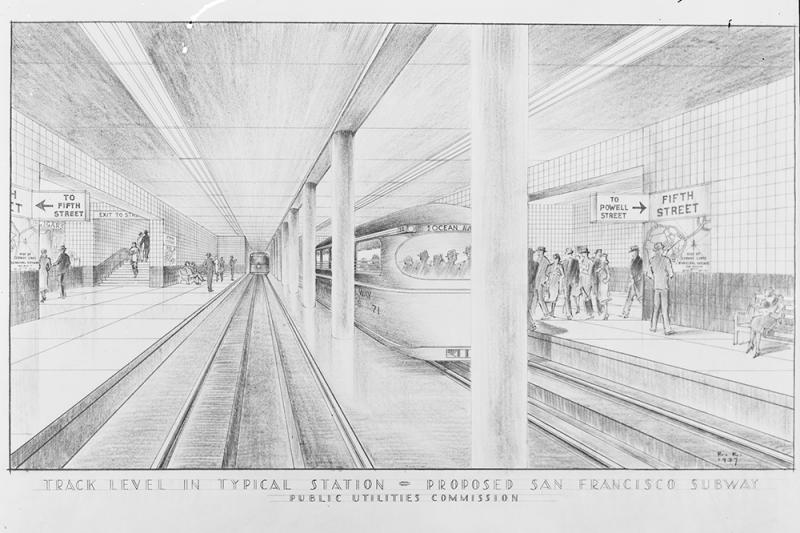 Bion Arnold’s Market Street subway plans were just one of many ideas floated over the years. This drawing from 1937 shows a proposed subway station at Powell and Market streets.

Arnold’s report is one of the earliest documents to include clear plans for a Market Street subway. 50 years later when Bay Area voters approved general obligation bonds to build BART & Muni Metro, elements of Arnold’s subway showed up in the design.

Even today, suggestions from the report can be found in the SFMTA’s Muni Forward and Vision Zero Quick Build programs. Moving and consolidating stops, increasing boarding area size, building transit boarding islands, and all-door boarding are all mentioned in the 1913 document. 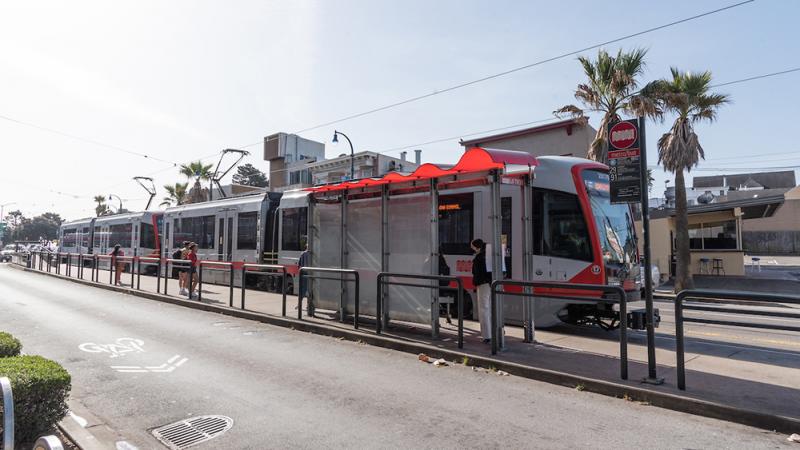 A common sight today, double-length platforms and two-car trains like those pictured here were just two improvements to transit service recommended by the Arnold report.

The Arnold report is one of the most extensive studies of transportation in San Francisco. 109 years later, many of the changes recommended by the report have become normal parts of our streets and transit system.