Skip to main content
HeadsUp: #FleetWeekSF Concert in the Castro this Thursday at Jane Warner Plaza from 5 to 6 p.m. The #FMarket will h https://t.co/QA4OQfQEsw (More: 29 in last 48 hours)
Subscribe
History in Motion

Over the 110-year history of the SF Municipal Railway, our transit vehicles have been painted in six main color schemes (known as “liveries”). Here’s a short look at those paint jobs, from the oldest streetcars to our newest buses.

The timelines of these liveries overlapped and old colors were not always phased out even after a new color was introduced. Not included here are the many colors of cable cars, historic vehicles, variations on the main colors, or any special paint jobs used.

When Muni started in 1912, vehicle paint colors were used to distinguish one transit service from another. Muni’s very first streetcars were painted grey with red windows and roof. Gold was used for lettering, vehicle numbers, and decorative lines. This combination gave the cars a simple yet elegant look. 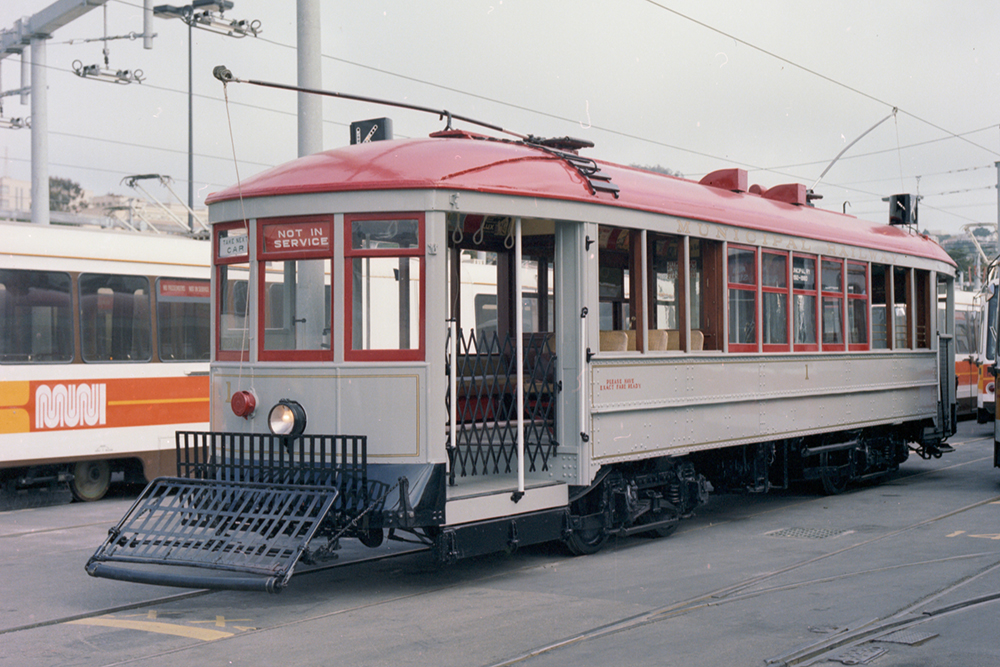 Seen here at Green Division rail yard around 1980, Streetcar 1 was built in San Francisco in 1912. It has been restored and operates today during special events.

In 1939, five special new streetcars arrived in the city wearing the second major color scheme for Muni. These cars came painted in a deep blue with bright yellow windows and roof. A small red pinstripe ran along the edge of the roof above the windows. Many older streetcars and buses were re-painted in these colors to help unify the look of the system. 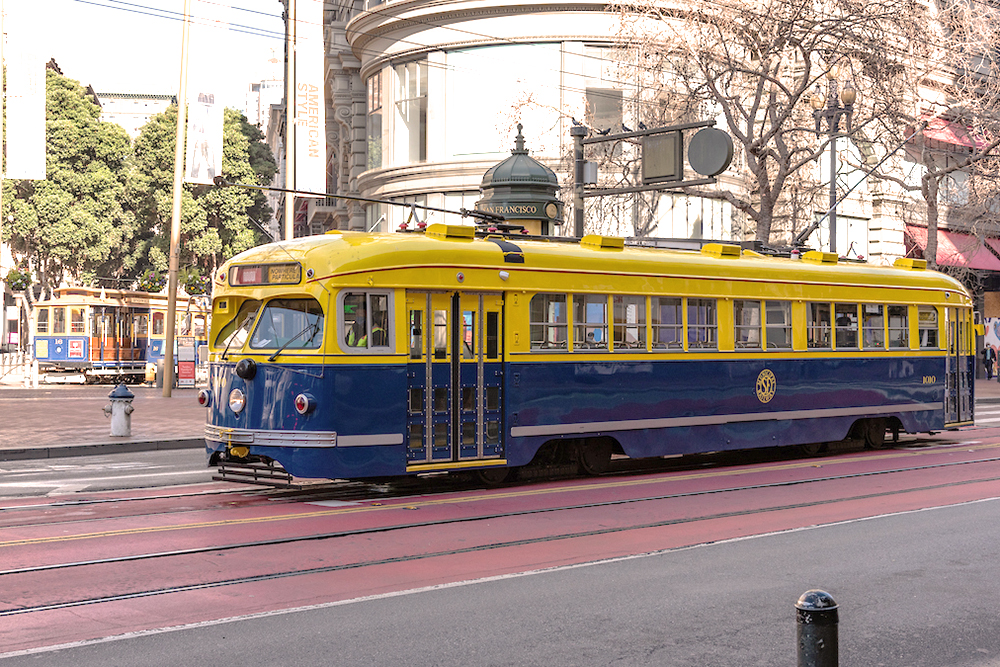 Today, Streetcar 1010 is painted with Muni’s blue and gold colors. The Western Railway Museum has the only surviving streetcar that originally had this paint scheme.

A short time after the blue and gold colors came out, a new paint job was launched in 1946. After merging with the Market Street Railway company in 1944, Muni needed a way to unify the two organizations. The new color scheme was a good way to show the public there was no longer two competing transit systems. Known as the green and cream “wings” livery, it used green on the body, windows, and roof of vehicles. Cream was used for the front, stripes above and below the windows, and a decorative design reminiscent of wing tips on the sides. This livery is perhaps one of the most well-known among older-generation San Franciscans and could even be seen on some vehicles into the early 1980s. 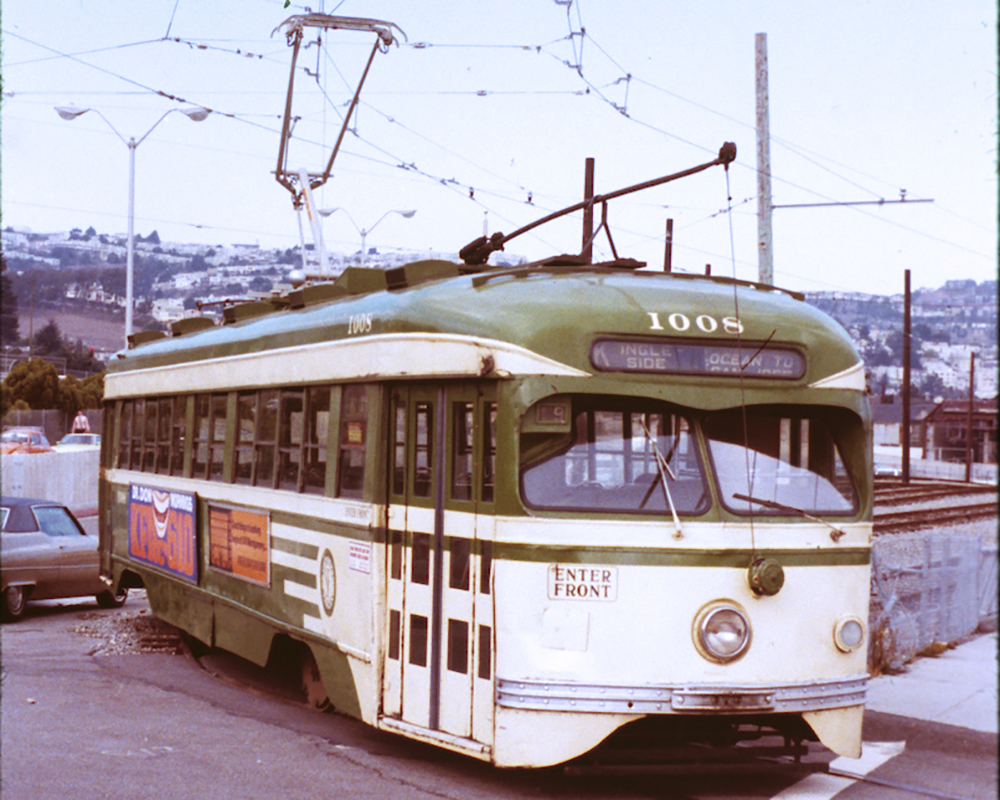 This photo taken in the mid 1970s shows the “green and cream wings” livery once worn by hundreds of Muni vehicles. This car was delivered to Muni in 1948 and still operates today.

Following the green and cream colors came a short-lived but notable paint scheme came in 1969. Muni was trying to revamp its look and introduced the “Maroon and Gold” paint job with a new logo and driver uniforms. The styling of the new logo and maroon color were borrowed from the California Street Cable Cars but first used on brand new buses from General Motors. 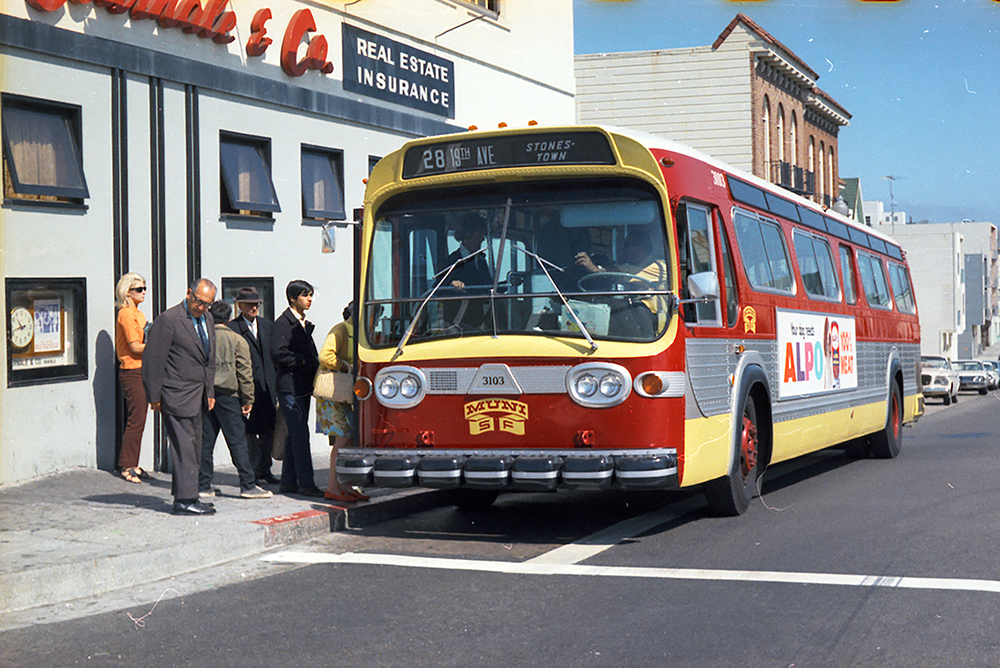 This photo from 1969 shows a new GM bus with Muni’s fresh logo and paint job. Today, Muni has one of this type of bus in its vintage bus fleet.

Perhaps one of the most well-known paint schemes was the “Sunset” livery unveiled in 1975. This time, Muni contracted with the world-famous advertising company Walter Landor & Associates for a complete branding package. The new look included everything from a squiggly “Worm” logo, vehicles painted white with “California Poppy” and “Sunset Glow” stripes, new bus stop signage, and matching brown driver uniforms. The new brand was launched at a perfect time. Hundreds of new buses and trains were coming in and Muni was about to open the Muni Metro subway system. Together, these changes really gave riders a fresh, modern transit system. 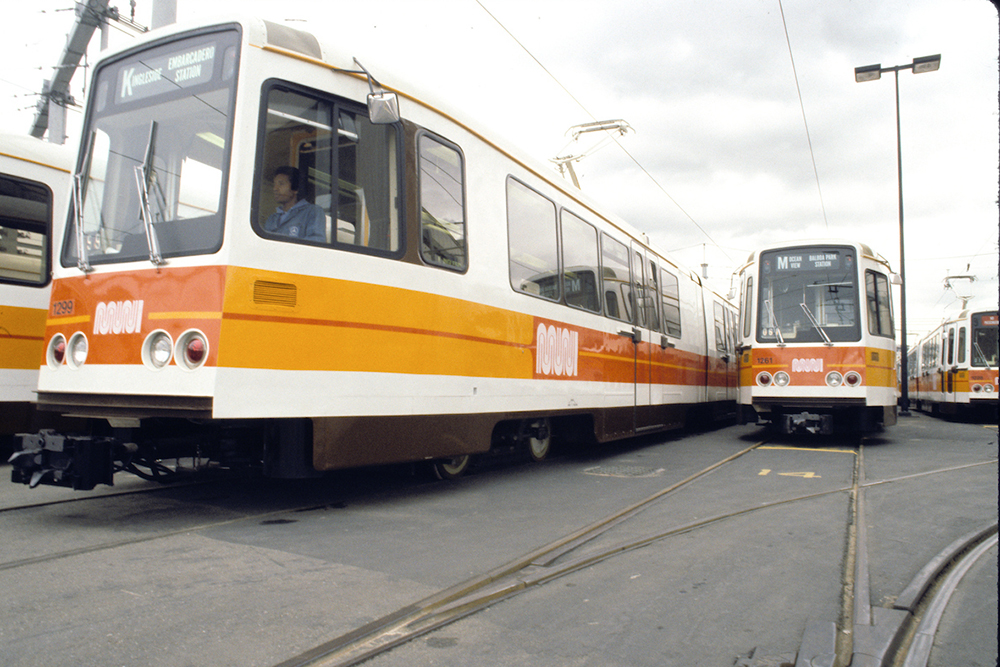 Muni’s new 1975 colors were meant to provide a clean look for the system.  Today, many riders remember this paint scheme and logo with nostalgia.

Starting in 1995, Muni returned to its roots with a revised version of the original grey and red color scheme. First used on new light rail vehicles known as “Breda” cars, the new paint features silver with red striping. These colors were phased in over nearly two decades in three variations, depending on the type of vehicle. Today, every bus and rail car in the system, excluding historic vehicles, uses the silver and red look. 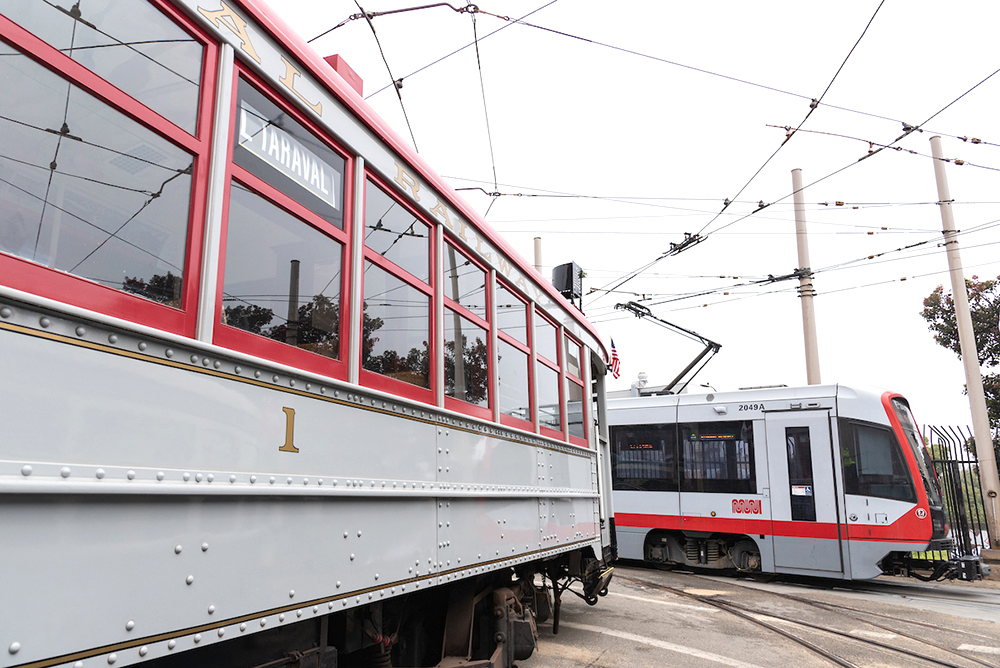 While the colors today fit right in with the modern era, they harken back to the original grey and red of Muni’s very first streetcar.

Aside from the six major color combinations listed here, there were at least five more that have been used at one time or another. Some of these were variations on the main color theme and others were used only on certain vehicles.