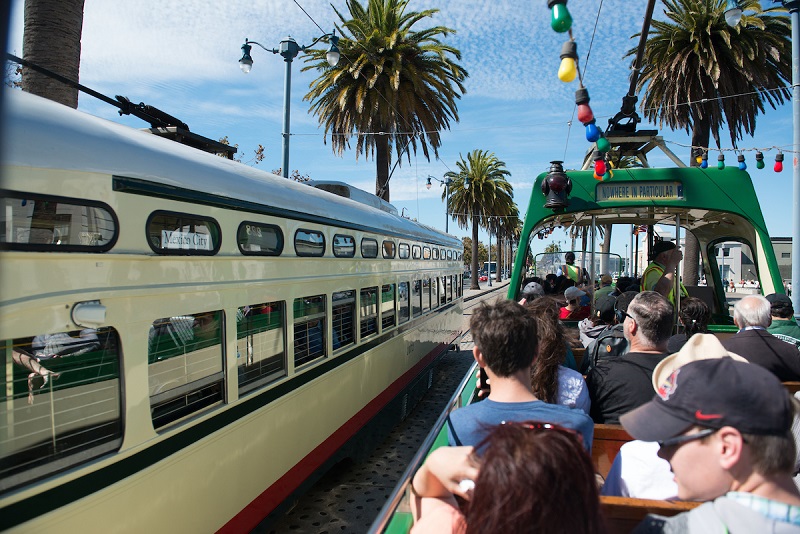 Passengers enjoying a ride along The Embarcadero during last year’s Muni Heritage Weekend.

The clang, clang, clickety-clack sounds of the past will come alive later this month for Muni Heritage Weekend, when additional vintage “green machines” will once again take to the streets of San Francisco to transport Muni history enthusiasts through time.

The 5th annual Muni Heritage Weekend is held by the SFMTA and the Market Street Railway, our non-profit partner that supports the preservation of Muni’s historic vehicle fleet. Festivities run Saturday, Sept. 24 and Sunday, Sept. 25 from 10 a.m. to 5 p.m.

Historic buses, cable cars and streetcars rarely in operation will return to serve the public for a weekend – some of them for free.

And with this year marking the 75th anniversary of Muni’s first trolley bus line, vintage buses will serve double duty as pop-up galleries featuring historic photographs from our archives.

The center of activity will be at the San Francisco Railway Museum and Gift Shop at 77 Steuart Street, which is operated by Market Street Railway. Guests will have the opportunity to take advantage of special sales of transit books and memorabilia. Proceeds will help fund the Market Street Railway’s historic vehicle preservation efforts.

Visitors of the free Railway Museum can see exhibits of historic photos and how transportation technology and aesthetics have evolved over the years. The museum is located at the corner of Steuart Street and Don Chee Way, where Market Street meets The Embarcadero in front of the Ferry Building. 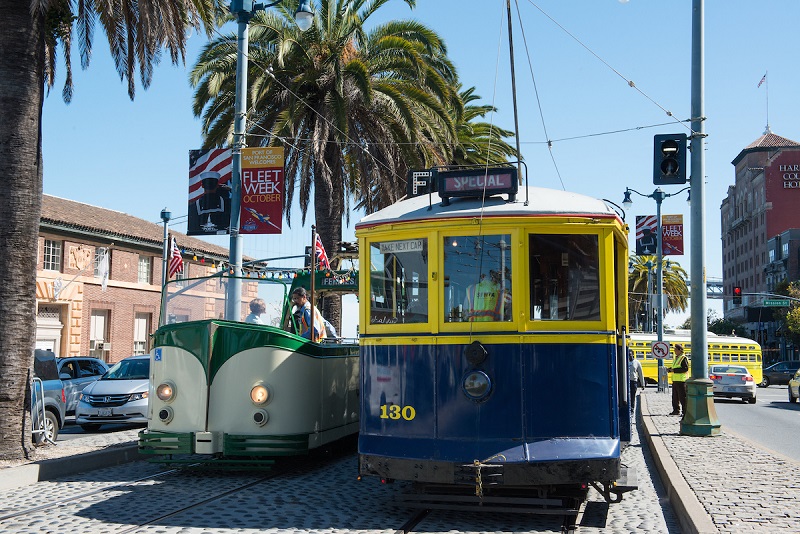 A sampling of historic Muni vehicles available to the public during Muni Heritage Weekend.

You can find more details on the Muni Heritage Weekend webpage.

Below is a list of all historic vehicles that will be available to view or ride and a map of routes they will serve. 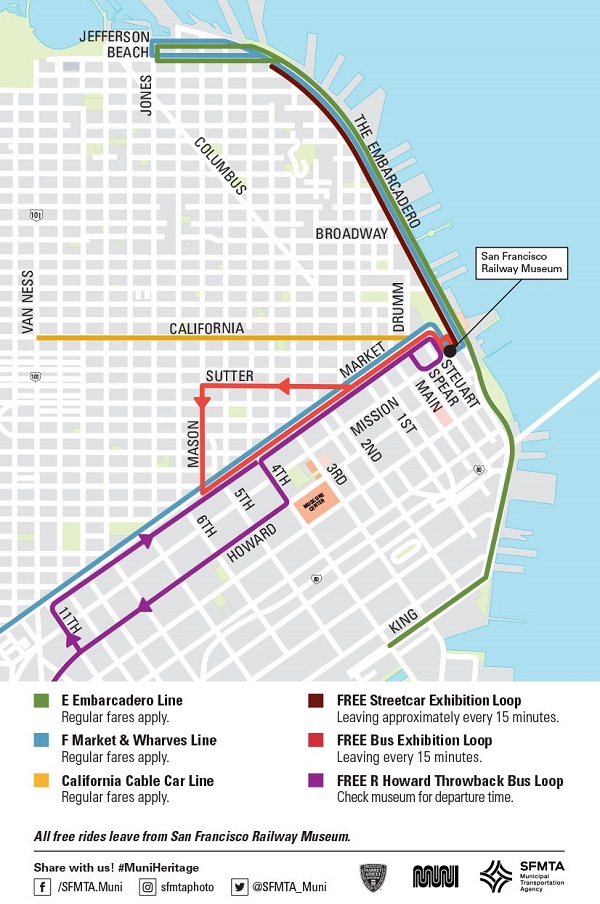 Historic Vehicles That Will Be Available for Rides or Display

Note: While the vintage streetcars listed below will provide service for free, regular fares will be required for historic streetcars in regular service on the E Embarcadero and F Market & Wharves lines.

Five historic streetcars rarely in operation will provide free rides along The Embarcadero between the Ferry Building and Pier 39. (Streetcars No. 1 and 130 may make some trips along the full F Market & Wharves Line.)

Streetcar No. 130: This streetcar, dedicated to the late Herb Caen, was part of an order for 125 cars to expand Muni service for the 1914 Panama-Pacific International Exposition.

Streetcar No. 228: The boat car from Blackpool, England was one of 12 built for the English seaside resort city in 1934. This was the second boat car acquired by Muni with the help of Market Street Railway members in 1984.

Streetcar No. 496: This Melbourne, Australia car went into service in 1928 and was purchased by Muni in 1984. This car has been cosmetically restored, made wheelchair-accessible and given a GPS system. Aside from these upgrades, 496 has remained true to how it operated on the streets of Melbourne for 56 years.

Streetcar No. 578: This 1896 streetcar is the oldest streetcar operated by a North American transit agency. It was converted to a work car after the 1906 earthquake and restored by Muni crafts workers in 1956 to its passenger configuration and original yellow livery as part of the city’s commemoration of the 50th anniversary of the earthquake.

Cable Car No. 42 is a special double-end cable car built in 1906. It served the O’Farrell, Jones & Hyde line until that route was discontinued in 1954. It will also make a special appearance and run regular service along the California Street Cable Car line.

Riders may board historic buses in front of the San Francisco Railway Museum on Steuart Street between Market and Mission streets.

Trolley Bus No. 776: This 1950 Marmon-Herrington trolley bus served virtually all of Muni’s trolley bus lines during its quarter-century of service. It is painted in its original green and cream “Wings” livery.

Bus No. 3287: Built by General Motors and purchased by Muni in 1969, this bus has been restored to its original maroon and yellow livery inspired by the cable cars.

Bus 3287 will travel on a loop on Market, Sutter and Mason streets.

Bus No. 506 (Stationary Exhibit): One of Muni’s first 10 original trolley buses from 1941. This bus will be staged for display (it will not operate) and showcase a new photography exhibit recounting 75 years of green machines.