Skip to main content
HeadsUp: The Kaiser Permanente @sfhalfmarathon & 5K is this Sunday, 8am. The 18, 33, 43 & 44 will have reroutes near @GoldenGatePark. #KPSFhalfmarathon https://t.co/3zAOVBmI6e https://t.co/EIXWa8Sbiu (More: 27 in last 48 hours)
Subscribe
Streets at a Glance 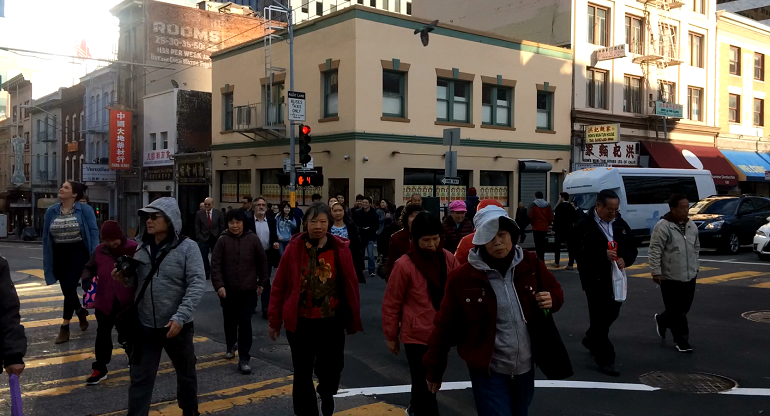 During a pedestrian "scramble," traffic signals allow people to cross in every direction, including diagonally.

At bustling city intersections, the nature of walking provides a particular advantage: When everyone moves at a human pace, people on foot can safely cross in every direction at the same time.

That’s the idea behind a pedestrian "scramble,” a traffic signal feature that can make traffic flow more safely and efficiently at certain busy intersections.

Yesterday, we joined community members to celebrate our newest scramble at Clay and Kearny streets, where Chinatown meets the Financial District.

Pedestrian scrambles are an addition to the usual cycle of traffic signal phases – a green light and “walk” signal for one street, a red light for the other. During a “scramble” phase, all traffic lights turn red, and all “walk” signals turn on, even in diagonal directions. That lets people cross the street without having to worry about turning drivers who fail to yield to them.

The scramble at Clay and Kearny was called for by community members including the Chinatown Community Development Center, Walk SF and Supervisor Aaron Peskin.

While we reconfigured the intersection to activate a scramble last April, our traffic signal team has now added pedestrian countdown signals, including diagonal ones, to make it more clear how the intersection should be used.

“This is an incredibly busy intersection, and people walking here needed and deserved an intersection that works for their needs,” said SFMTA Sustainable Streets Director Tom Maguire.

Clay and Kearny is on San Francisco’s “High-Injury Network,” the 12 percent of city streets that see 70 percent of traffic injuries, where we focus safer engineering improvements like these in pursuit of Vision Zero – an end to traffic fatalities.

We’ve installed four other pedestrian scrambles to date in the dense area of Chinatown and Financial District at Stockton and Sacramento streets and on Montgomery Street at Bush, California and Pine streets.

Keep an eye out for more safety improvements, including more signal upgrades like pedestrian head starts, around the city.