Skip to main content
ATTN: The annual #ChineseNewYear Parade is now underway from Market & 2nd St. All #SFMuni reroutes are now in effect. Regular service will resume after the roadway has been cleared (approx. 10pm). For service details:https://t.co/qNRIndWkgN https://t.co/994511JoO4 (More: 20 in last 48 hours)
Subscribe

During the Super Bowl City festivities in front of the Ferry Building from January 30 to February 7, event restrictions will be in place on sections of Market Street and The Embarcadero that will have an impact on those walking and bicycling. Super Bowl City presented by Verizon, centered around Justin Herman Plaza, will be a free-to-the-public fan village designed to celebrate the Super Bowl’s 50-year milestone. Along with the NFL Experience driven by Hyundai at Moscone Center, it will be a hub of fan activities like interactive games and concerts.

The events will be active from January 30 to February 7, but auto traffic detours and Muni re-routes will be in effect from January 23 to February 12 to allow for staging and disassembly. As the construction of the fan village will begin January 23, pedestrian and bicycle access may be restricted as early as that date. 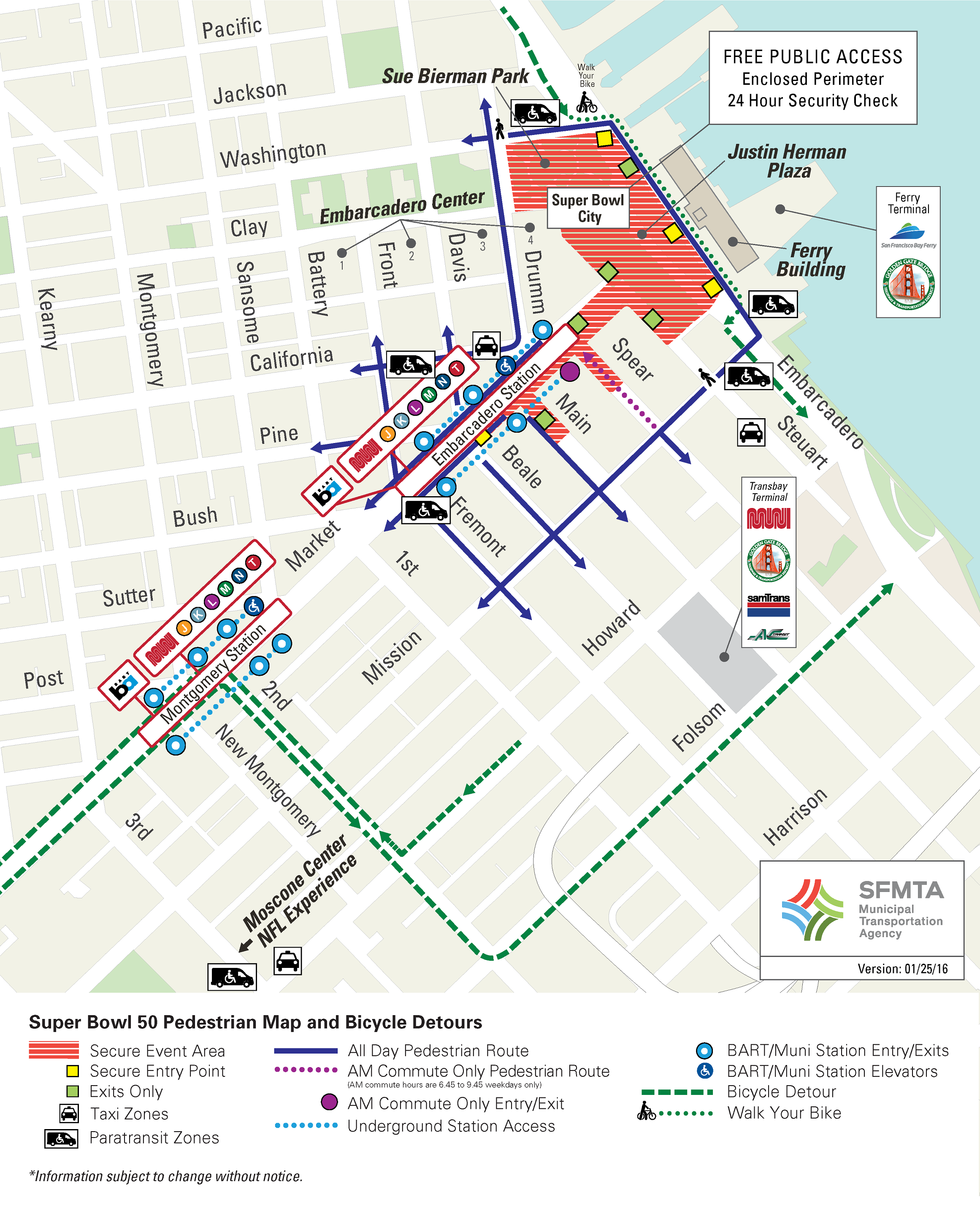 Around the Super Bowl City zone, shown in the map above, a security perimeter will be in place at all times from the morning of January 30 to the evening of February 7. The construction of the fan village will begin January 23 and access may be restricted as early as that date. The zone will be accessible to the public for free at all hours through either the secured entrance on Market Street or directly across from the Ferry Building.

The perimeter will cover the following areas:

Access to the Embarcadero Muni/BART station will be open, but the entrance/exit at the southwest corner of Market and Spear streets will be closed during the event dates. There will be an exception during morning rush hours, approximately 6:45 - 9:45 a.m., when that station entrance/exit will be open.

Pedestrians looking to cross Market near Main Street may bypass the security perimeter using the BART/Muni station entrances on either side of Market to travel through the station mezzanine.

For further details about security restrictions and event hours, visit the Super Bowl 50 Host Committee website, where they've also posted an allowed and prohibited items list for Super Bowl City. For inquiries about Super Bowl 50 events, you can also call 311.

The suggested bicycle detour route between The Embarcadero and Market Street is on 2nd street via Howard or Folsom Street. Note that 1st and Battery streets are expected to be congested with auto traffic detoured off of southbound Embarcadero.

Due to the anticipated crowds, bicyclists should plan to walk bikes on the east sidewalk in front of the Ferry Building.

Near the security zone, bicycle and auto traffic will be local access only on Drumm and Davis streets between Washington and California, as well as Market and Mission Streets east of Battery/1st Street. Bikes and autos will also be prohibited on Beal, Main and Spear streets south of Market to Howard Street.

For more details on getting around during the Super Bowl 50 events, stay tuned to our blog and our Super Bowl 50 page, where you can sign up for email updates and find other useful resources.