Super Bowl 50 is fast approaching and the Bay Area is gearing up to host the golden anniversary of the NFL's biggest event, but the associated traffic detours in downtown San Francisco will be here even sooner.

From January 23 to February 12 — almost three weeks — street closures will be in effect for two major Super Bowl events: Super Bowl City, a fan village in front of the Ferry Building and on Market Street that will be free to the public and the NFL Experience, a pro football interactive theme park at the Moscone Center that will be ticketed. (Check out our Super Bowl 50 page for the latest transportation details.) 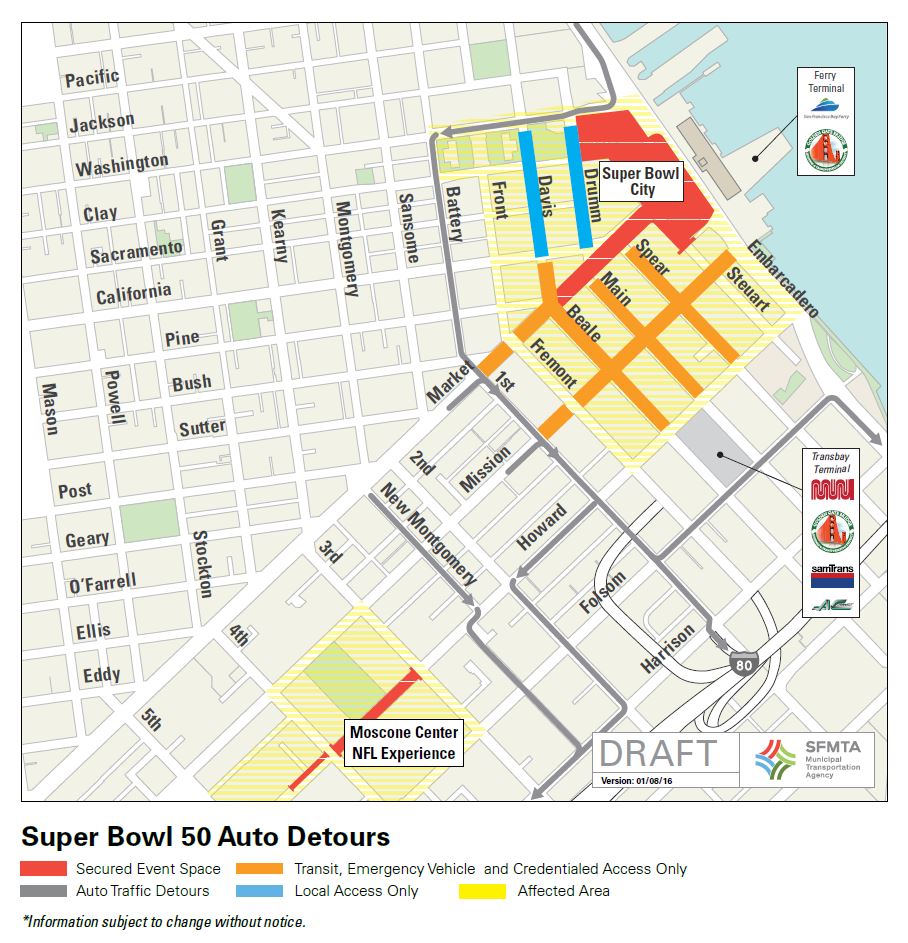 The traffic detour routes are explained in the above graph, but there’s one simple message we’d like to spread to minimize traffic headaches: If possible, please avoid driving near the area of the Super Bowl events.

We encourage visitors and commuters to instead come by transit, foot or bike. For folks driving from further out of the area, we encourage you to park at a garage outside of the city and arrive by BART, Caltrain, or ferry.

Although the Super Bowl events will be active from January 30 to February 7, streets in the area will be closed to vehicle traffic for longer to allow for staging and disassembly. Drivers will be guided to detour routes, which may become congested due to the extra car traffic.

The most significant traffic closure will take place on The Embarcadero in front of the Ferry Building, where the southbound lanes will be closed to vehicles for Super Bowl City. (The event will also occupy a section of Market Street -- stay tuned for another post with details on the transit impacts.)

At Super Bowl City in front of the Ferry Building, the following streets will be closed to motor vehicles and bicycle traffic:

Curb space (i.e. parking) will be limited to make room for transit, emergency vehicles and event loading. For parking alternatives outside the Super Bowl City zone, check out our city parking page.

At Moscone Center, vehicle traffic will be prohibited on Howard Street from 3rd to 4th Street, as well as some lanes between 4th and 5th Streets.

Below are the detour routes where car traffic will be guided around the event zones. Once again, we encourage everyone to avoid driving on these routes unless necessary. If you need to drive north or south through the eastern part of the city, we recommend using Hyde Street, Gough Street, or Van Ness Avenue if possible.

Drivers traveling eastbound on Market and Mission Streets will be forced to turn south on First Street, then to Folsom Street to continue east.

This detour will be the same route used during other Moscone Center events like Oracle OpenWorld and Dreamforce last fall.

If folks help spread the word to leave the car at home, we’ve seen how major traffic closures like these can work with minimal pain. In November, the eight-day traffic closure at 4th and King Streets seemed to go off without a hitch, even with crowds drawn to events nearby.

For more details on how to get around during the Super Bowl season, check out our Super Bowl 50 page, sign up for e-mail updates and stay tuned to the Moving SF blog.