Skip to main content
HeadsUp: Real-time monitoring of this account will be limited for the remainder of today (6/28) beginning at 1 PM. https://t.co/db0UV4RCoJ (More: 9 in last 48 hours)
Subscribe

As you may have already heard (or read in our previous blog post), starting on Wednesday, January 29 some of the busiest sections of Market Street are going “Car Free” to increase safety and improve Muni. That means no private vehicles will be allowed to travel along Market Street eastbound from 10th to Main or westbound from Steuart to Van Ness. Traffic will still be able to cross Market, but there will be no turns onto the street in the car-free area.

Our crews are hard at work getting the street prepared and have already installed signs that will be unveiled on January 29th. In addition, we’ve created new pedestrian safety zones, added new loading zones and are extending the Muni lanes down Market Street. 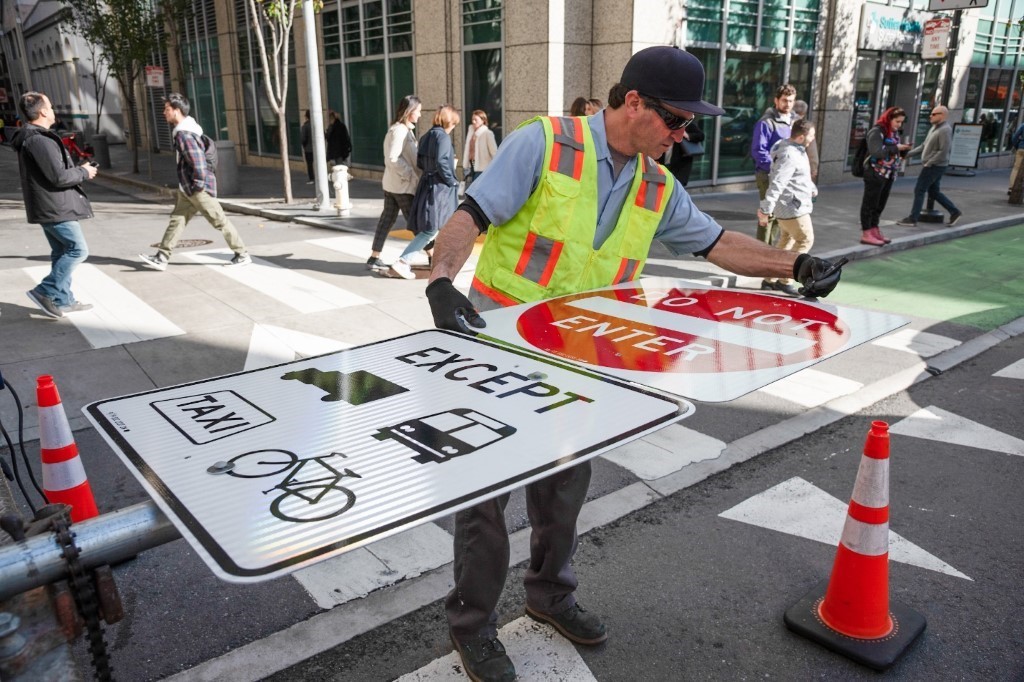 Crews installed signs alongside streets in preparation for the changes on January 29. Most signs were put up and will be covered up (or “bagged”) until next week when the car-free Market begins. 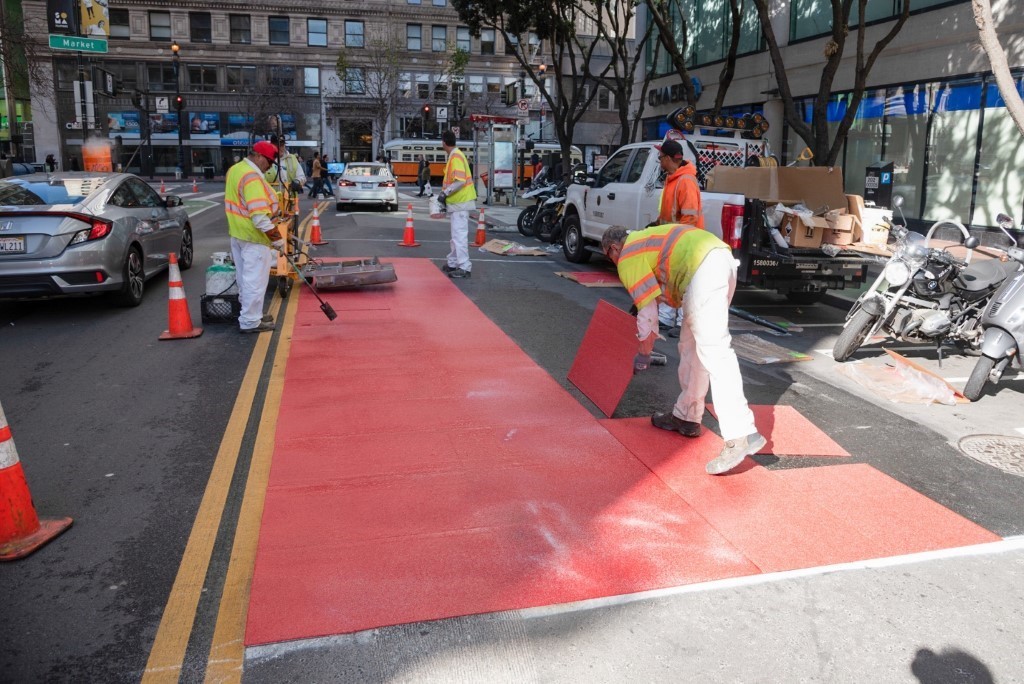 Red Muni lanes getting installed along 2nd Street near Market. As a part of the quick-build, Muni lanes are being extended east from 3rd to Main and on the last half-block of 2nd Street to improve transit in busy areas. 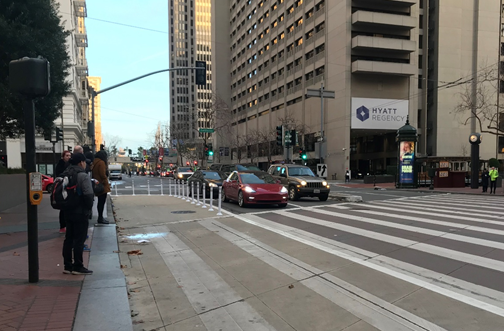 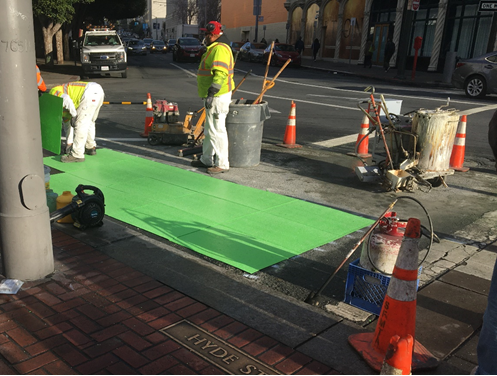 A new bicycle turn lane and bike box getting installed at Hyde/8th Street.  In case you want to get into all the details, we compiled a set of some of our most frequently asked questions below.

1. What is Better Market Street?

Better Market Street is the City’s multi-agency project to transform 2.2 miles of Market Street – from Octavia Boulevard to Steuart Street – enhancing safety and accessibility, improving transit performance, replacing aging infrastructure, and revitalizing the corridor’s streetscape. The goal of the project is to revitalize Market Street and reestablish the street as the premier cultural, civic and economic center of San Francisco and the Bay Area while bringing the transit system up to date.

There were 123 injury collisions on Market Street between Octavia and Steuart in the year 2018. Since 2014, there have been an average of more than 100 per year with 75 percent involving people walking or biking. You can find more info about the full Better Market Street project here.

A quick-build project consists of parking and traffic modifications that are fast and relatively cheap to implement. Examples include painted safety zones, bike lanes, adjustments to parking regulations, parking and loading changes, changes to the configuration of traffic lanes. Crews typically use materials such as paint, traffic signs, traffic delineators, and traffic signal changes. Quick-build projects do not involve large capital construction elements since those involve much longer design, higher cost contracting, and construction phases.

3. How many people use Market Street today?

4. What is going to change with the quick-build project and when?

5. Where is the car-free area?

Private vehicles will be prohibited on Market Street eastbound from 10th to Main and westbound from Steuart to Van Ness. The car-free area is shown in the red areas below along with other changes shown by blue arrows.

6. Will I still be able to use Market Street to access Franklin and Gough?

Yes. The Quick-Build phase-only restricts traffic east of 10th or Van Ness. The future capital project would extend the turn restrictions west to 12th Street, but will not affect access to Franklin or Gough.

7. Will there be enforcement?

San Francisco Police and SFMTA Parking Control Officers will be helping to call attention to the new restrictions and directing traffic.  Vehicles violating the restrictions could be cited for violating CVC 22101d (violating an official traffic control device) which carries a $238 fine and adds one point to a DMV record.

8. What sort of outreach are you doing?

Our teams have discussed various proposals with the community for years during the design phases for Better Market Street. We hosted 5 rounds of large public meetings, presented to dozens of groups and studied the corridor extensively. Outreach specific to the quick-build, car-free area included: social media, signs in parking garages, electronic signs on/above downtown streets, stakeholder meetings, multi-lingual flyers, door-to-door discussions, media stories, and messages on electronic NextBus signs in all Muni shelters. We also worked with all the app-based mapping companies to ensure they deliver accurate routes that avoid Market Street in the car-free area.

9. How will Quick-Build improve accessibility?

The private vehicle restrictions on Market Street and newly painted safety zones at select intersections will reduce pedestrian conflicts with vehicles.  We also have provided additional loading zones on cross streets – over 100 new loading zones, including 23 new white zones and 8 new blue zones. The vast majority of the loading zones on cross streets are for general commercial loading (unlike the ones on Market, which are restricted to six-wheel vehicle restrictions) and can be used for up to three minutes for passenger loading.  Maps of all the new and existing zones can be found here: SFMTA.com/BetterMarketStreet

The quick-build phase is estimated to cost approximately $3.5 million and is funded through local general funds.

11. Which vehicles will be allowed after private vehicles are restricted?

Buses, paratransit, taxis, commercial delivery vehicles and emergency vehicles (Transportation Network Companies such as Uber and Lyft are not permitted). All vehicles would continue to be allowed to access Franklin and Gough streets.

12. Are there any exceptions for vehicles with disability placards?

13. Will deliveries still be allowed on Market Street?

Yes, as long as the delivery vehicles have commercial license plates. As is the case today, most of the loading zones on Market Street require vehicles to have at least six wheels (big trucks and buses). In addition, there will be new restrictions on deliveries during the peak-hours in the peak-direction to improve safety:

Only in certain cases including: if responding to an emergency, street sweeping, construction and maintenance, servicing a vehicle or street infrastructure, or parking or traffic enforcement. City vehicles are issued government exempt license plates -- These are different from the commercial license plates issued to commercial vehicles. As a result, City vehicles are not permitted to park in yellow zones, make restricted turns or access streets which are reserved for commercial vehicles only, unless such vehicles are responding to an emergency.

15. How are you coordinating with Uber and Lyft and other Transportation Network Companies (TNCs)?

TNCs are typically not commercial vehicles, and as such, they will not be allowed to drive on Market Street.  However, we have coordinated with Uber and Lyft to have the white zones added to their apps, so that passengers wishing to have a pick-up on Market Street will be redirected to the closest cross-street white zone for their pick-up.

16. With cars no longer allowed to travel on Market Street, will traffic get worse on Mission Street and other parallel streets?

We did extensive traffic modeling to understand the impacts of removing cars from Market Street. Currently, about 200 to 400 cars drive on Market Street during peak hours, depending on the block and direction.  Because streets north of Market and those in SoMa have grid layouts, people driving have extensive choices about which street to take, and will not all be diverted to the same street.  We anticipate about 100 cars per hour will be shifted to Mission Street, which will not significantly impact general traffic or transit on Mission Street. In addition, the turn restrictions will reduce congestion at intersections, as cars turning onto Market currently block traffic on cross streets as they wait for a gap in pedestrians crossing to complete their turn.  The turn restrictions will aim to improve traffic flow as well as pedestrian safety.

17. When was the project approved?

The Better Market Street project’s Environmental Impact Report was certified by the Planning Commission on October 10, 2019. The Public Works Hearing was held on October 11. The SFMTA Board approved the project on October 15, 2019.

18. Quick-Build is exciting, but when will the bigger construction project start?

The capital project will be built in phases, with each of the five phases estimated to be $150-200M. Much of the costs are state of good repair work, including rail and trackway replacement, the overhead wire system, traffic signals, repaving, streetlights, sewer, and water.  Funding for Phase 1 has been secured through several existing local sources, including the voter-approved Prop A General Obligation Bond and Proposition K (formerly OBAG), as well as some federal funding through a BUILD transportation grant. The Better Market capital construction project is currently in design, with the first phase between 5th and 8th Streets anticipated to start construction in late 2020 or early 2021. We have more information on the full capital project construction and design available.