Weekend BART Closures in SF: How to Get Around

BART plans to close its tracks between Glen Park and Daly City stations over seven weekends, from the end of July through October, to make vital repairs and install noise-reducing equipment. Balboa Park Station will be closed for BART service, but Muni Metro lines will remain in service to and from the station.

To help bridge the gap during these weekend closures, Muni and SamTrans will provide free bus shuttles. We’ll also have extra service on alternative Muni routes. 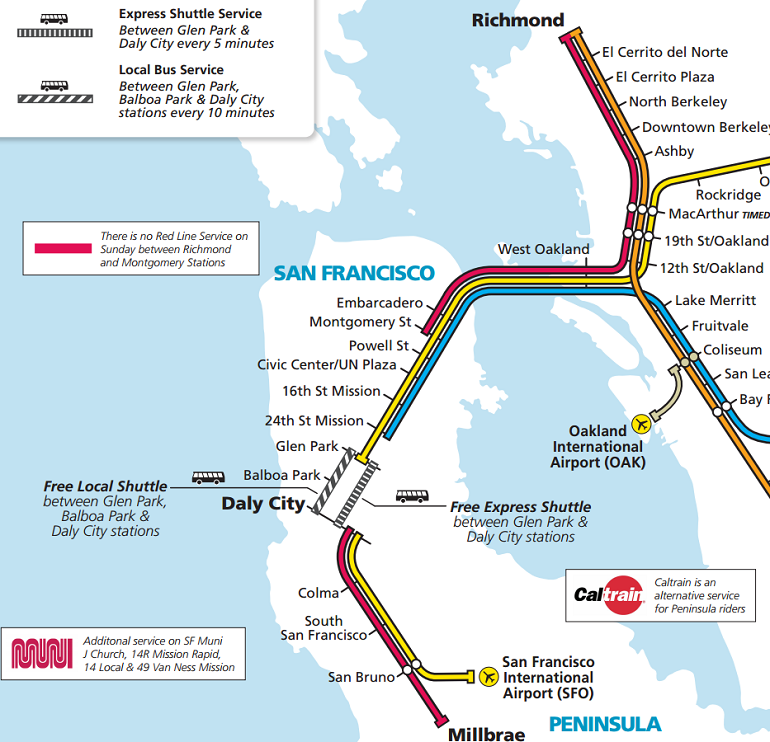 SamTrans will provide free express shuttle service between Daly City and Glen Park stations (no stops at Balboa Park). The express trip is expected to take about 15 to 20 minutes.

BART advises riders to plan an additional 20 to 40 minutes for their trip, or one hour if traveling to SFO Airport or Millbrae.

The shuttles will run during all hours of BART service. BART will have ambassadors and signs at the stations to assist customers.

For travelers going to and from the Peninsula, regular SamTrans and Caltrain service will be available as an alternative.

Within San Francisco, the following Muni routes (paid service) connect with the affected BART stations. Extra service will be provided on the J Church, 14R and 49.

More information on the BART closures can be found on BART's website. For more trip planning info and assistance, call 511 or visit 511.org.