What’s New in the Richmond? Transit Lanes to Support the 38 Geary 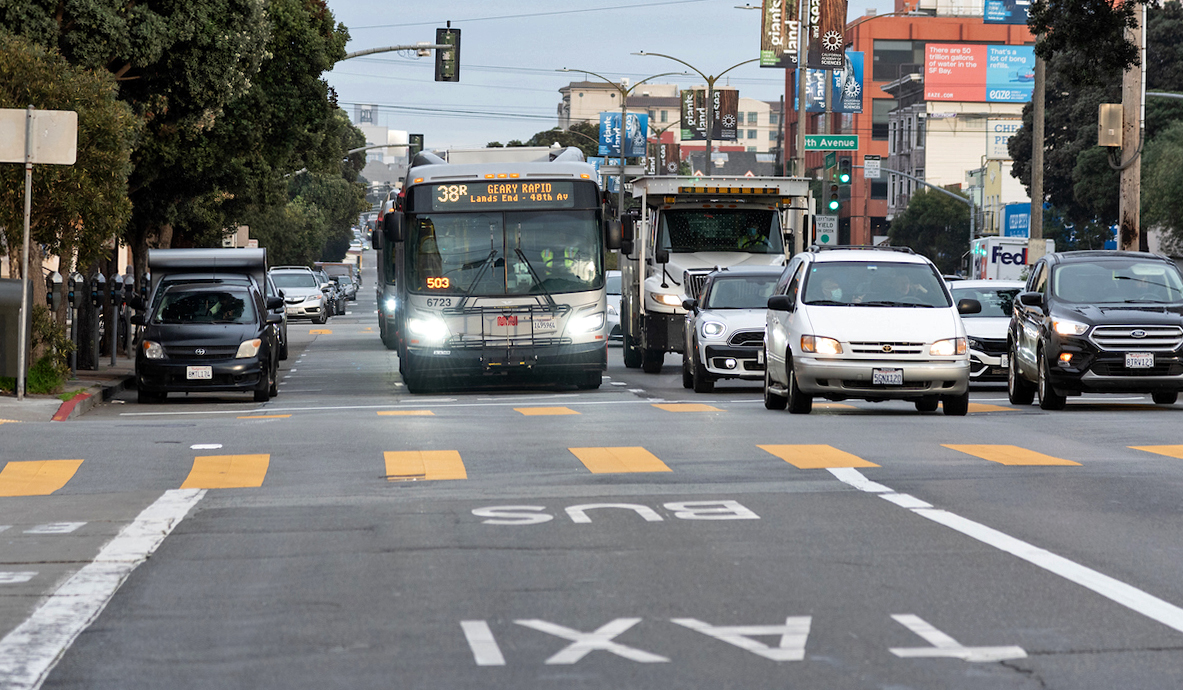 The Geary Boulevard corridor provides neighborhoods with vital services such as medical centers, grocery stores and other essential businesses. During the pandemic, the 38 Geary bus route has continued to serve about 18,000 daily riders making essential trips. Our new transit lanes help keep buses moving to reduce crowding and travel times for people who still depend on transit to get around the city.

When buses aren’t competing with traffic, they can stay more evenly spaced apart and complete routes more quickly, providing more frequent service and reduced crowding with the same number of buses. You don’t have to live in the Richmond to reap the rewards—reducing delays on any part of Geary Boulevard means that buses can run more frequently, which benefits passengers along the entire route. 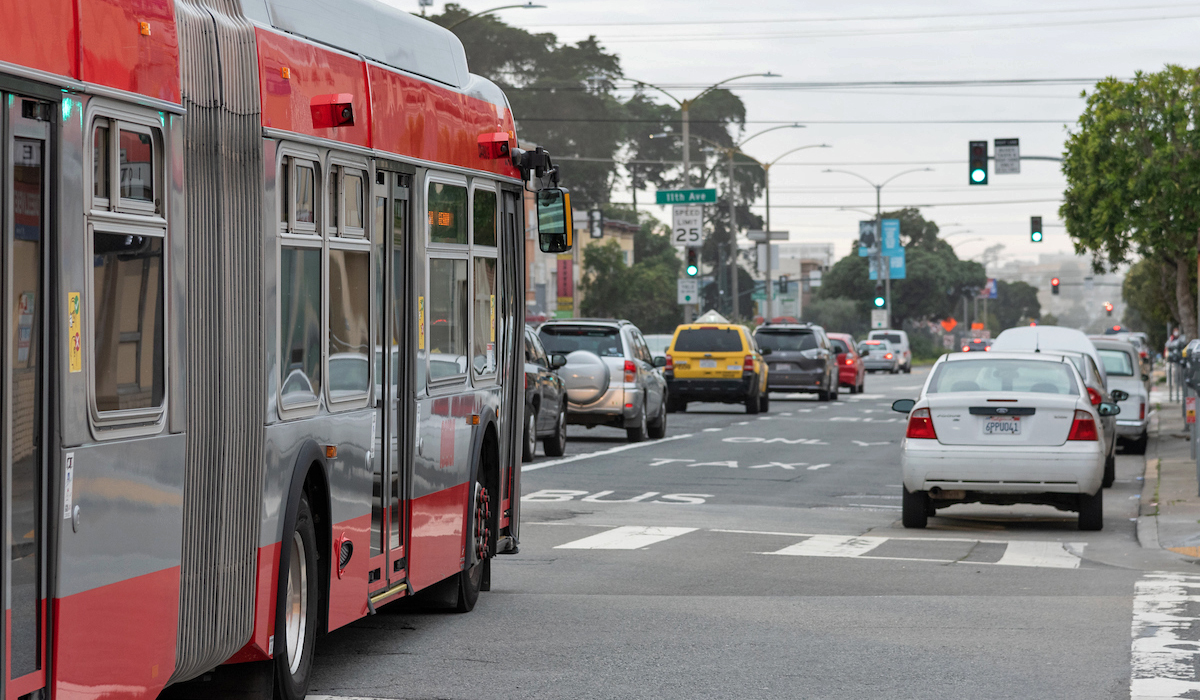 Temporary curbside transit lanes have been striped with white paint and “Bus/Taxi Only” stenciling and signage.

Transit lanes are especially important at a time when physical distancing requirements mean Muni buses can only carry one-third of the passengers that they could previously. Over the summer, as congestion increased and auto speeds slowed, crowding (by COVID-19 capacity standards) began increasing on the 38 Geary and 38R Geary Rapid . This occurred despite ridership numbers staying relatively flat, as buses became delayed in traffic.

Looking forward, as more of the economy re-opens, the new temporary transit lanes will help us avoid crowding without adding additional buses or operators. This is critical at a time when the SFMTA is facing major revenue shortfalls and has limited resources.

In addition to transit lanes, the Geary Boulevard project also includes other improvements. We placed temporary wooden sidewalk extensions (known as bus bulbs) at bus stops at 25th, 20th and 6th avenues. These allow buses to stop without pulling in and out of traffic and provide more space for people waiting. To give buses a head start on general traffic, we installed special Muni-priority traffic signals at the intersections of 25th, 20th and 15th avenues. 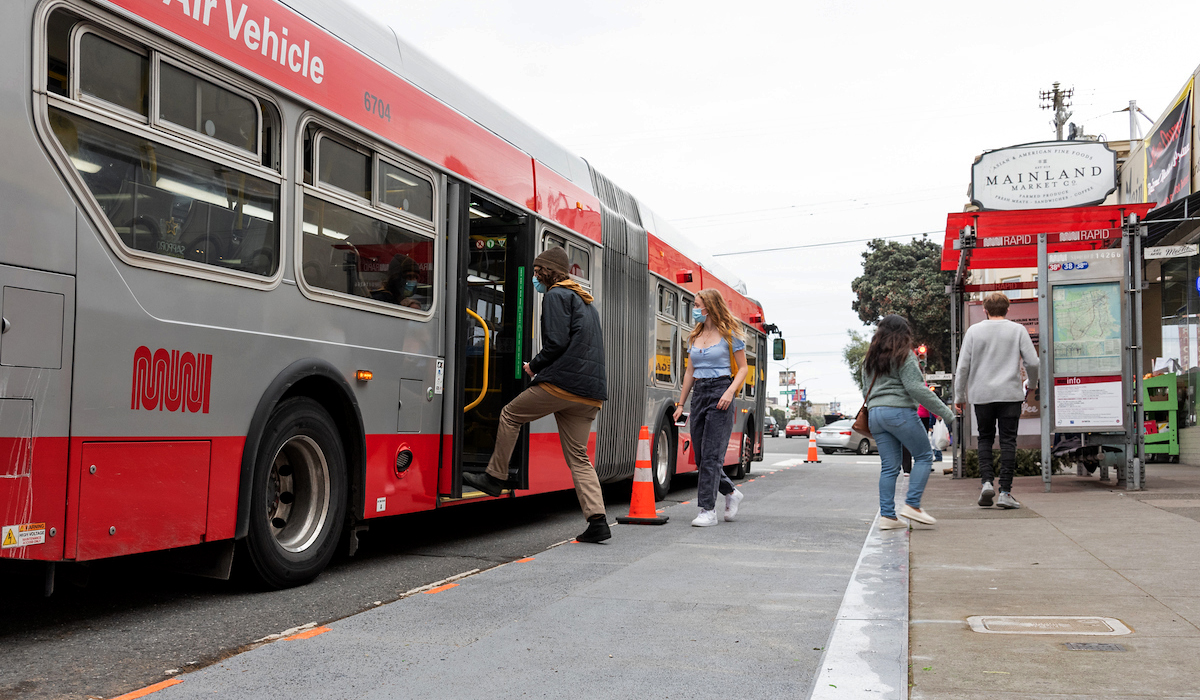 This new temporary bus bulb on Geary Boulevard at 20th Avenue allows buses to stop without pulling to the curb.

Next, we will evaluate the temporary emergency transit lanes—including looking at Muni travel times, crowding and impacts to traffic and parking—to determine how well they’re working and whether to pursue making them permanent, potentially with adjustments or additions.

Let us know what think about the new transit priority treatments on Geary. Whether you ride the bus, drive or walk on Geary Boulevard, we want your feedback. Take our survey at SFMTA.com/38Survey

For details on the project and to register for updates, visit our website 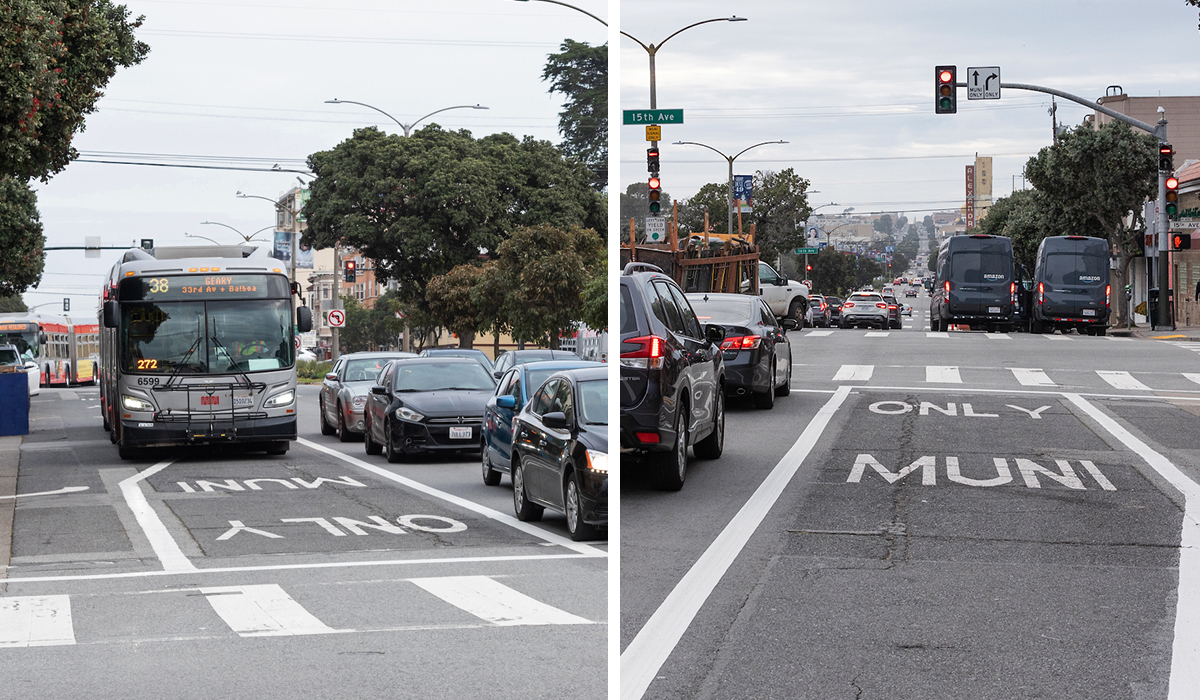 A special Muni queue jump and head-start transit signal give buses the jump on general traffic at the intersection of Geary Boulevard and 15th Avenue.