UPDATE: Temporary emergency transit lanes were installed along segments of Geary Boulevard in winter 2020-21 and evaluated this spring. Despite recent increases in traffic citywide, evaluation results are showing that the new transit lanes and other transit treatments have improved 38 Geary bus performance, with minimal traffic impacts to Geary Boulevard or parallel streets. And a majority of those who took our evaluation survey support making the transit lanes permanent. See a snapshot of evaluation highlights or read the complete evaluation report.

Based on the positive evaluation findings and support for maintaining the transit lanes, the SFMTA is planning to bring the project to an upcoming SFMTA Board hearing to be considered for permanent legislation, tentatively scheduled for July 20. There will be an opportunity for public comments during, or prior to, the meeting.

Have questions? Talk to project staff at a Q&A session during virtual office hours on June 30, 4 p.m. to 6 p.m.

The 38 Geary and 38R Geary Rapid have been a lifeline for essential trips during the pandemic and have experienced crowding despite increased service. Along with other key locations across the city, chosen based on current ridership and travel time data, the SFMTA is installing temporary emergency transit lanes on segments of the 38 Geary and 38R Geary Rapid Muni routes to keep buses out of traffic and reduce crowding and travel times.  By reducing delay from congestion, Muni can use its limited resources to provide more frequent service and pick up more passengers with the same number of buses. 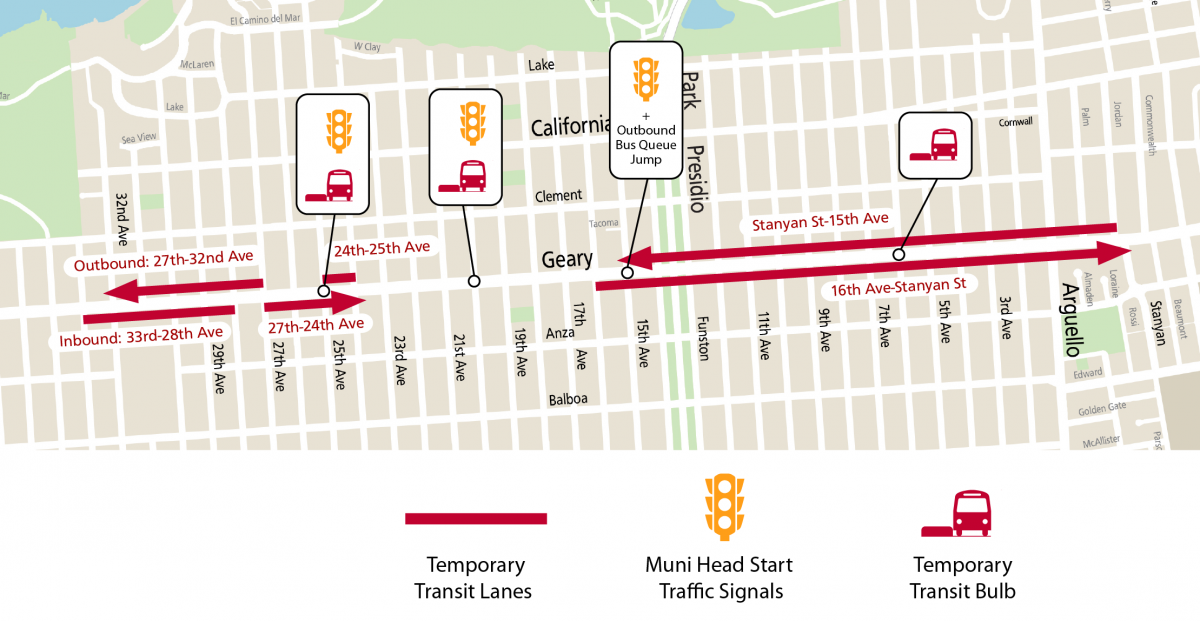 Temporary transit lanes have been approved along the following segments of Geary Boulevard:

These temporary transit lanes will generally replace the curbside travel lane in segments of the corridor that currently have three travel lanes per direction. Transit lanes will be in effect 24-hours daily and striped with white paint, “Bus/Taxi Only” stenciling and signage.

Thank you to everyone who attended the online public hearing on September 24 or provided comments on the 38 Geary temporary emergency transit lanes. We heard strong support from a majority of participants and the following six key themes:

Did you miss the meeting? You can review a meeting summary with more detail or watch a video of the presentation.

On October 9, 2020, the City Traffic Engineer completed a review of the results of the Geary Temporary Emergency Transit Lanes hearing and approved the project. The remaining items, to convert angled parking to parallel parking on eastbound Geary between 16th and 15th avenues, were approved by the SFMTA Board on November 3. These transit lanes will help protect public health, particularly for those who continue to rely on transit to make essential trips, by reducing crowding and travel times for riders along the entire route.

The urgent nature of this emergency calls for putting temporary measures into place, directly on the street. This accelerated approach allows the city to respond quickly to protect public health and support economic recovery while we work with the community to evaluate and make adjustments to the temporary transit lanes in real time. Pending approval, areas of evaluation will include, but are not limited to:

Community-based organizations, stakeholders and neighbors are involved in shaping the framework and process for evaluating and adjusting the emergency transit treatments in real time. Based on public feedback and ongoing, on-the-ground data monitoring of the temporary transit lanes, we can tweak—or even remove lanes—to meet the needs of the community and Muni customers. Both qualitative and quantitative data will be collected after implementation and will inform any changes needed to the transit lanes and whether permanent approval of the lanes should be pursued.

Based on the positive evaluation results and in response to evolving conditions, the SFMTA is now considering pursuing side-running transit lanes instead of center-running transit lanes in the Geary Boulevard Improvement Project limits, pending outreach and approvals. The SFMTA plans to seek input on this change as a part of outreach activities anticipated in mid/late 2021.

Jun
30
Virtual Office Hours: Geary Boulevard Transit Lanes Q&A These online office hours are open to the public to ask the project team questions about the 38... 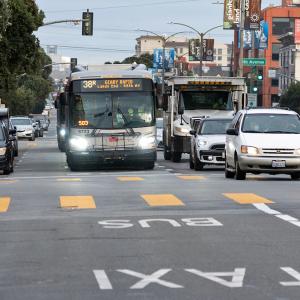