Construction activity continues to progress and shrink the need for surface space at each of the stations. Recently, crews reopened traffic lanes and sidewalksalong Stockton and 4th streets through Chinatown, Union Square and SoMa.This change is a huge milestone as it significantly reduced the constructionimpacts for the surrounding community and visitors.Once construction has been completed, we will begin testing the new subway to make sure it is safe and ready for service. Testing is an intricate process—it includes the full integration
of complex systems that all need to sync and work together. From automatic train control systems, to radios, overhead lines, customer information systems and two different LRV fleets—there are several systems that need to come together to run safe and reliable service.

After a comprehensive, six-week assessment by the new project director and contractor, the substantial completion date for construction is now estimated at summer 2020 and the target for start of regular revenue service is summer 2021.

More details about the schedule are available here 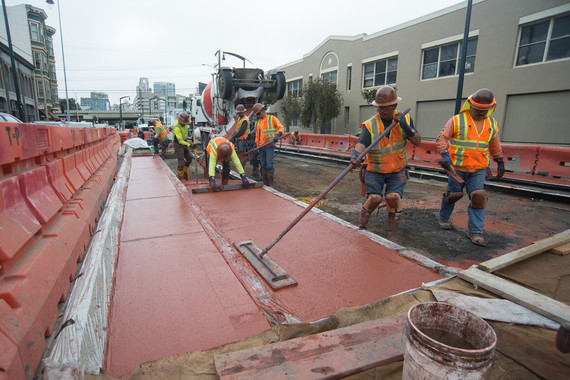 Crews finished laying most of the cement between the tracks on the surface section of the alignment.

A section of the new T Third runs above ground on 4th Street between King and Bryant. Crews continue to work on a new surface station at Brannan, as well as laying concrete in the trackway. Complicated pavement renovation work for the intersection at 4th and King Streets was completed this summer. Intersection restorations on 4th Street at Brannan and Townsend are also scheduled to be finished soon – adding to the already complete intersections at Folsom, Howard and Bryant. 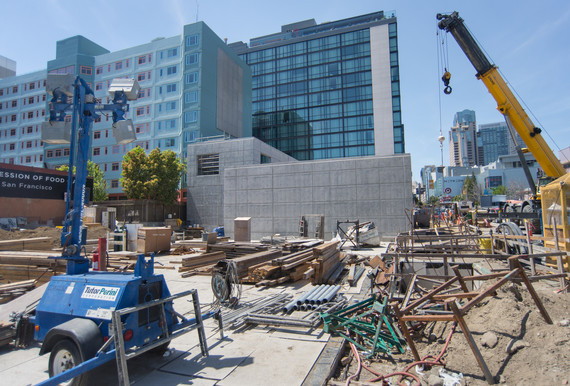 The headhouse on top of Yerba Buena/Moscone Station begins to take shape in its SoMa neighborhood.

Crews continue to work on major station interior elements, as well as building the street level station entrance structure. Public art installations are planned to continue inside the station and eventually in the plaza at street level. The eastern sidewalk of 4th street at Folsom in front of the station reopened at the end of August, greatly improving pedestrian access in the area. 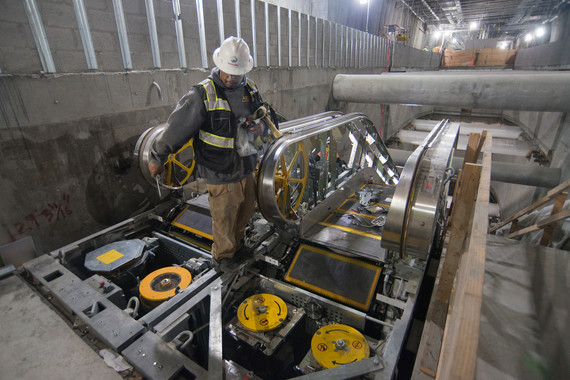 The escalators at Union Square/ Market Street Station will be some of the longest and deepest in the nation.

Work continues on the interior structure and the future station entrance at the southeast corner of Union Square. The bus stop island and traffic lane on Stockton at Geary returned to use this summer, making it easier for visitors to get around. While much of the surface work is now completed, there will be a continued presence of vehicles and equipment as work inside continues. 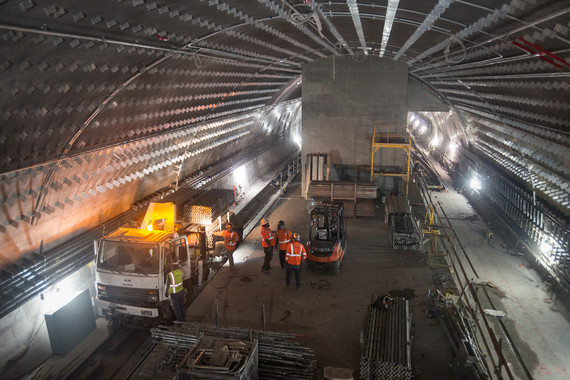 Looking down on the platfom level at Chinatown station gives a sense of the huge size of the cavern.

Crews are focused on construction of the north and south platform caverns deep inside the stations as well as building to top-out the station headhouse. With work completed on the North Egress Shaft (emergency exit) and utility upgrades in the sidewalk along Stockton, much of the most impactful construction work has been completed. That completed work enabled the sidewalk in front of the station to be reestablished and after a final paving, the additional southbound lane of Stockton is now in use for buses and vehicles.