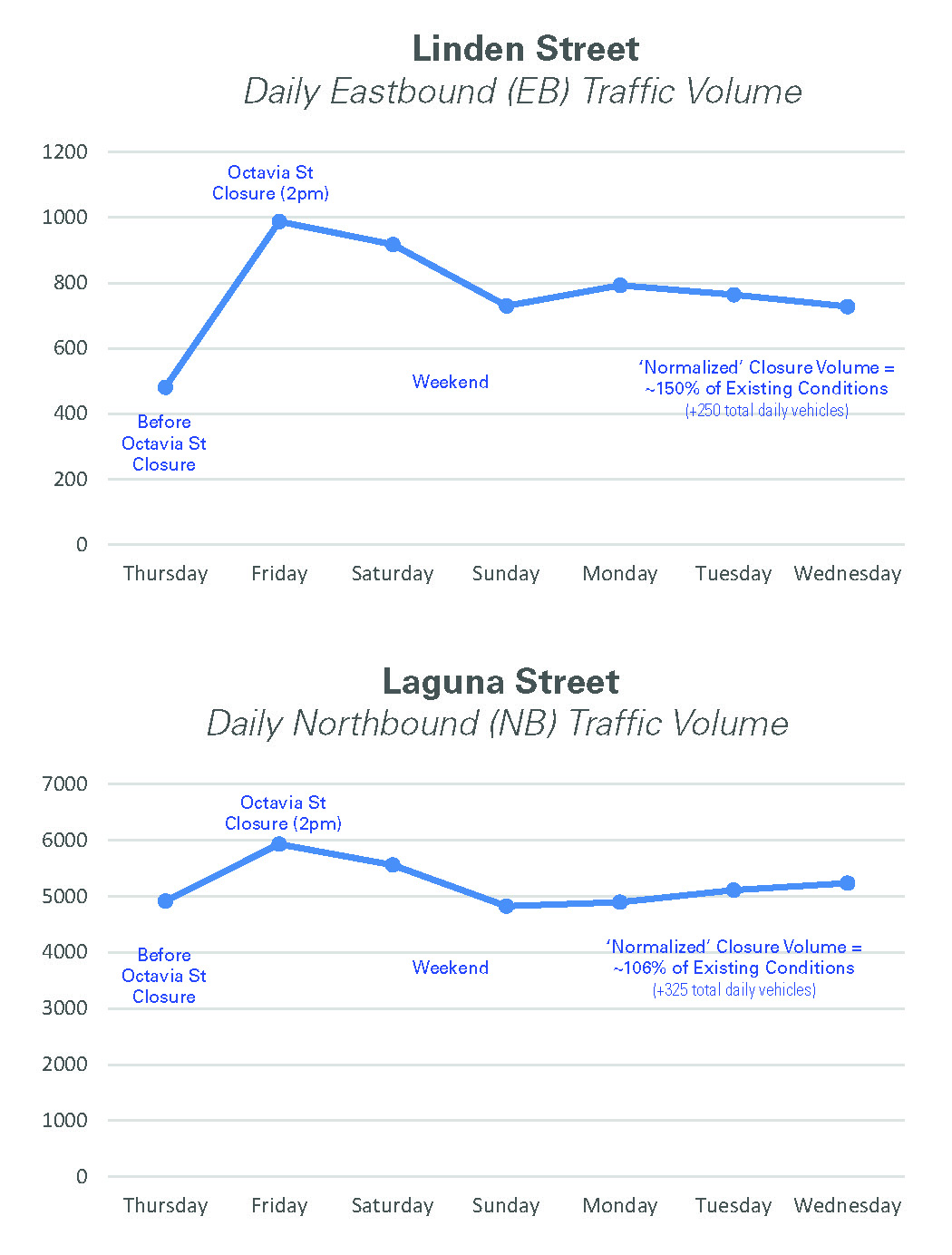 The SFMTA closed northbound Octavia Boulevard to vehicles between Linden and Hayes streets from March 31 - April 7, 2017 in order to raise awareness and engage the neighborhood on the Octavia Boulevard Enhancement Project. This week-long event was also an opportunity to evaluate traffic impacts as the city contemplates a potential longer-term ‘open street’ design concept for the block. A summary of public comments and input is now available [comment summary PDF; comment inventory PDF].

As expected, Linden Street saw an increase in traffic volumes (from about 500 to 1,000 vehicles on the first day of the closure) as vehicular access to Hayes Street was cut off from northbound Octavia Boulevard. However, these numbers quickly trended downward as the week went on as drivers adjusted their routes. Although counts were not conducted for the Hayes/Octavia intersection, the intersection was observed to operate more smoothly than normal, with fewer blocked lanes and crosswalks, and less vehicle honking. [data summary PDF]

Although increased traffic on Linden Street is not desirable given community plans for more ‘living alley’ treatments, approximately half (or more) of the diverted traffic appeared to be ride-hail vehicles such as Uber and Lyft and other private vehicles dropping-off and picking-up passengers on Octavia Street. The SFMTA is exploring the possibility of creating passenger loading zones on nearby arterial streets to reduce the amount of ride-hail traffic on Octavia and Linden streets. We also continue to work to understand and accommodate emergency response needs with a potential longer-duration street closure.

A decision on whether to move forward with some or all aspects of the 'open street' design concept for Octavia at Patricia’s Green is expected by the end of the year.

Thanks to those who offered comments during this spring’s outreach events for the Octavia Boulevard Enhancement Project, specifically on proposals to expand the pedestrian realm and introduce streetscape features and traffic calming along the northbound local road between Page and Fell/Hayes streets.

On June 19, 2017, the Octavia Boulevard concept design alternatives and summary of public comments were included in the Request for Proposals (RFP) issued by the Mayor’s Office of Housing and Community Development (MOHCD) for Parcels R, S, and U along Octavia Boulevard. MOHCD plans to develop these three existing vacant parcels into affordable housing with ground-floor retail, and the selected non-profit developer will be required to work with the SFMTA and Public Works to help finalize and implement a preferred streetscape design. Responses to the RFP are due November 17, 2017 with housing and streetscape construction activities expected to start in 2019.

Parking and Circulation Changes for Gough/Hayes/Fell

Last week, the SFMTA implemented a pilot effort to improve parking and circulation along Gough Street, between Fell and Hayes streets. The double right-turn lane onto Fell Street was converted into a single right-turn/through lane with new parking spaces added along Gough Street’s west side. A follow-up evaluation will determine whether or not to make these changes permanent and, if so, how best to manage the new curb access (with loading zones, meters, etc.).

Other improvements were implemented in tandem with the Gough Street pilot, including intersection "daylighting" and a right turn pocket at Hayes & Gough streets, and an expanded peak-hour travel lane for westbound Fell Street.