Skip to main content
HeadsUp: #SFMuni Cable Cars will be back in service starting this Saturday, September 18. https://t.co/F8Q71V6k82 (More: 18 in last 48 hours)
Subscribe

Want to hear about next steps for the Emergency Transit Lanes on 7th and 8th Streets in SoMa? Check out the on-demand presentation to hear about the evaluation of the temporary emergency lanes and next steps to pursue making them permanent.

Throughout the course of the pandemic, the SFMTA focused on maintaining a core service network serving essential workers and those who depend on Muni for essential trips. To avoid overcrowding and ensure frequency of service, we began implementing Temporary Emergency Transit Lanes on key routes at locations where traffic bottlenecks occur. Portions of the 19 Polk route were chosen for the implementation of these temporary treatments, based on observed travel time improvements and ridership levels.

The 19 Polk, a key north-south connector in San Francisco, showed up to 35% travel time savings during the shelter-in-place, when there was significantly less car traffic, particularly on 7th and 8th streets.

After presenting an initial plan to the SFMTA Board for approval in June 2020, a virtual community meeting was held in August 2020 to gather feedback about the 19 Polk proposal. Subsequently, based on public input, monitoring of transit speeds and traffic conditions and the experience we had with temporary lanes installed in other parts of the City, our team prioritized implementation of key segments of the project. These improvements were implemented on 8th Street in October 2020 and due to existing construction, transit lanes were implemented on portions of 7th Street beginning in summer 2020.

Converted the lane closest to the curb to a temporary transit lane and right turn only lane: 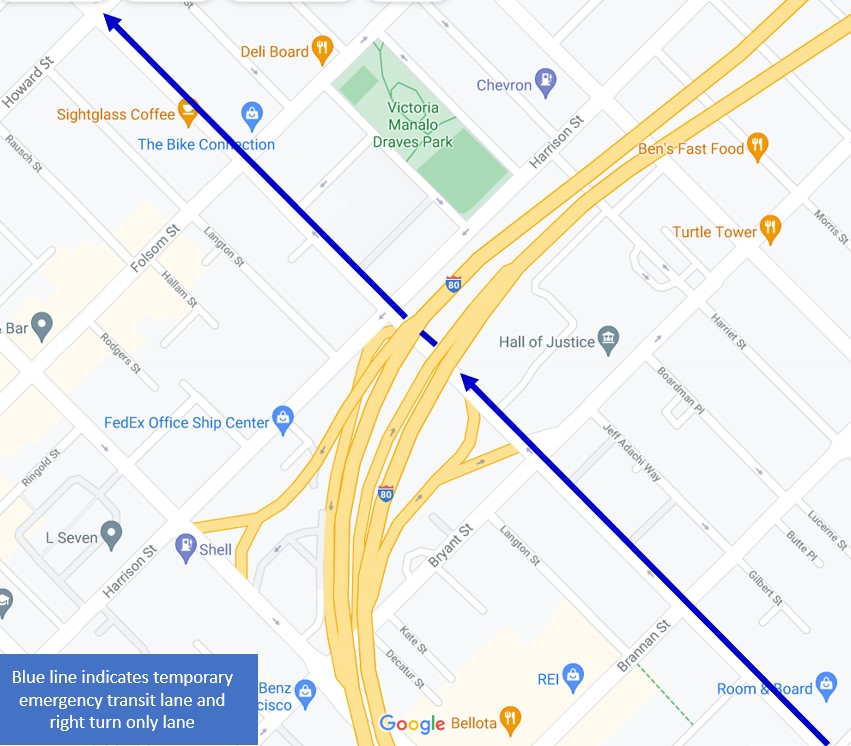 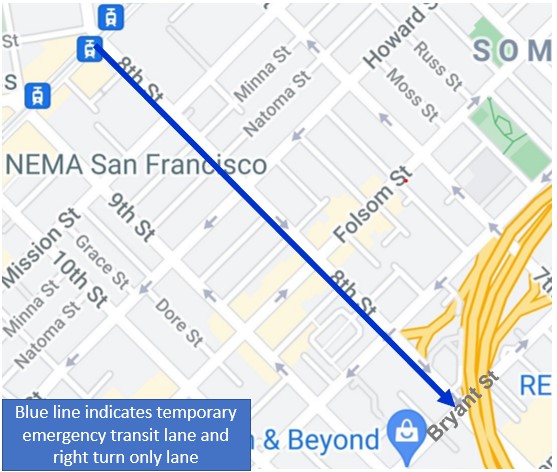 Temporary emergency transit lanes will continue to be installed on the remaining portions of 7th Street in Fall 2021. Sign up for project updates

Thank you to everyone who attended the Community Meeting on August 25, 2020 or provided comments on the 19 Polk temporary emergency transit lanes.

Aug
25
Virtual Office Hours: 19 Polk 7th and 8th Street Transit Lanes Q&A These online office hours are open to the public to ask the project team questions about the 19...
Aug
25
Virtual Community Meeting: 19 Polk Temporary Emergency Transit Lanes (TETL) This fall, temporary emergency transit lanes will be installed on 7th and 8th streets downtown...
Jun
30
Board of Directors special meeting, June 30, 2020 Due to the COVID-19 health emergency and to protect our Board members, SFMTA staff, and members of...