Project Update 06/11/2021: The project is now substantially complete!  A minor number of items are still in progress, but they are expected to be completed soon.  This project was approved at the SFMTA Board Meeting on June 15, 2021.

The goal of the Anza Street Bike Lane Project is to improve safety and connectivity for cyclists and pedestrians traveling east and west on Anza Street. The planning and preliminary engineering phases of the project explored the installation of bikeways in the core project area of Anza Street from 30th Avenue to Arguello Boulevard. Project evaluations and positive feedback from community-members during outreach confirmed the feasibility of extending Class II bike lanes and Class III bikeways east to Masonic Avenue. The planning phase additionally identified opportunities and funding for pedestrian safety improvements that will benefit all roadway users.

Anza Street, between 30th Avenue and Arguello Boulevard, is a 50-foot wide street running east and west through the Richmond District. Between Arguello Boulevard and Parker Avenue, Anza Street is a 56-foot wide street with four lanes of traffic. Between Parker Avenue and Masonic Avenue, Anza Street consists of a two-lane, 54-foot-wide roadway with 90-degree angled parking on the south side of Anza Street. Anza Street is often used by cyclists to traverse the Richmond District because it is wide and traffic is not heavy.

A bike lane on Anza Street supports connections to intersecting bike routes at Masonic Avenue, Arguello Boulevard, 8th Avenue, 15th Avenue, 23rd Avenue and 34th Avenue, making it easier and safer to reach destinations such as Golden Gate Park which is 3 blocks to the south and commercial districts to the north at Geary Boulevard and Clement Street and to the newly improved bikeway on Arguello Boulevard.

The Anza Street Bike Lanes Project conducted in-depth public outreach including interviews with key stakeholders, an online public open house and survey in English, Chinese and Russian, and speaking to community groups including the Planning Association of the Richmond (SFPAR), the Richmond Senior Center in Chinese language, the District 1 Supervisor’s Office Town Hall meeting. Outreach included a mailing to 3,500 residences, informational flyers posted along the corridor and broadcast by email and social media through both SFMTA and District 1 Supervisor's Office channels.

The proposed designs were reviewed at the Engineering Public Hearing on April 30, 2021. The project will be considered by the SFMTA Board of Directors on June 15, 2021.

The project elements being considered by SFMTA Board of Directors include:

Jun
15
Board of Directors meeting, June 15, 2021 Due to the COVID-19 health emergency and to protect our Board members, SFMTA staff, and members of...
Apr
30
Engineering Public Hearing Meeting, April 30, 2021 The Streets Division of the San Francisco Municipal Transportation Agency will hold a public...
Dec
7-18
Anza Street Bike Lanes Virtual Open House The Anza Street Bike Lanes Project seeks to improve safety and connectivity for bicyclists... 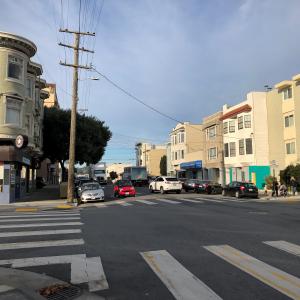