A new elevator is coming to the Castro Station. To support a system wide effort to improve safety and accessibility, the SFMTA is rehabilitating and modernizing the subway system elevators. The Castro Station Accessibility Improvement Project includes an elevator design that will allow station agents to see into the elevator and maintain sight lines from the station agent booth. The elevator design includes a translucent etched pattern of gradient lines made on clear laminated glass. To create a safer and more comfortable place to walk, the brick area near the station entrance will be regraded and both the walkway above the station and the sidewalk on Market Street will be made wider.  The existing plaza lighting will be replaced, the terraces and concourse level will be replanted and new fences and benches will be installed.

The Castro Station Accessibility Improvement Project is a partnership with San Francisco Public Works and the SF Arts Commission to improve Americans with Disabilities Act (ADA) access to Muni transit. We’re pleased to say that the project now calls for adding a fourth stop to the new three-stop elevator. The new stop will serve the Market Street sidewalk, allowing riders of Muni’s 35 & 37 routes to enter directly into the elevator and ride down to the concourse level and enter the station through the fare gates. The elevator will still include stops at Harvey Milk Plaza and the platform level as included in the original scope. These design changes impact the architectural and structural systems and will require re-doing several city approvals. This project is now estimated to start construction in Fall 2021 and projected to be complete in 2024.

The three pictures below were different design options considered for the new station elevator. All options were made of glass to allow station agents to see into the elevator cab and maintain sightlines from the station agent booth. These designs were considered as the project complete its Civic Design phase and moves into the Detail Design phase.

The project design option 1 received more favorable from the community survey and feedback.  The project team is worked with San Francisco Public Works and with The Friends of Harvey Milk Plaza in the design phase of this project.

To find out more about the new design, visit Friends of Harvey Milk Plaza at:  www.friendsofharveymilkplaza.org/newdesign

Above pictures (from left to right): Draft renderings of new elevator added to station site; examples of existing elevators and public art that could be incorporated in the elevator design.
Project video(s)
Project Details, History or Features

The 4th stop added on Market Street to provide accessibilty to customers.  This stop will also benefit the customers riding the 35 & 37 bus routes to enter from street level to get to the concorse. 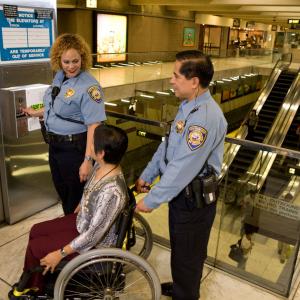