In July 2016, the SFMTA and the RPD implemented the Twin Peaks Pilot Promenade to test out a new configuration for Twin Peaks Boulevard. The pilot configuration was made permanent in June 2020 as RPD and SFPW continue to study long-term design solutions.

Twin Peaks is a world-famous tourist destination with 64 acres of open space, is home to the endangered Mission Blue Butterfly, and has three developed trail systems: the Peaks Trail, the Mission Blue Butterfly Trail, and the Portola Trail. These trails provide public access to this undeveloped natural area.

In July 2016, the SFMTA implemented a pilot project to test a new roadway configuration around Twin Peaks.  The western half of the Twin Peaks "Figure 8" roadway was opened to two-way vehicle traffic, and the eastern half was opened to people walking and biking.

The SFMTA recommended extending the Twin Peaks Figure 8 Pilot, which used paint and concrete barriers to designate the eastern half of the Figure 8 roadway for people walking and biking. The Pilot began in July 2016, during which time the SFMTA conducted an evaluation of the pilot configuration and collected community feedback. The number of vehicles driving over the 30 MPH speed limit dropped by 77% on the new two-way eastern half of the roadway, and through a year-long public survey, more than 58% of respondents supported making the project permanent. For more information, see the Pilot Evaluation Fact Sheet.

Based on these results, the RPD and SFPW are developing proposals for permanent changes to the Twin Peaks Figure 8. The pilot project configuration was made permanent in June 2020 allowing time to continue to explore further design options. During this time, RPD and SFPW will work to complete the following:

Apr
21
Board of Directors meeting, April 21, 2020 Due to the COVID-19 health emergency and to protect our Board Members, SFMTA staff, and members of...
Mar
6
Engineering Public Hearing Meeting, March 6, 2020 The Sustainable Streets Division of the San Francisco Municipal Transportation Agency will hold a...
Apr
17
Board of Directors meeting, April 17, 2018
END_OF_DOCUMENT_TOKEN_TO_BE_REPLACED 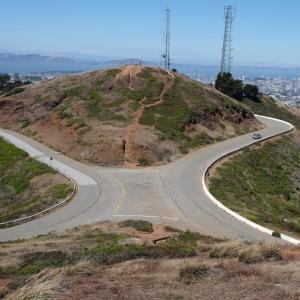 Twin Peaks For All