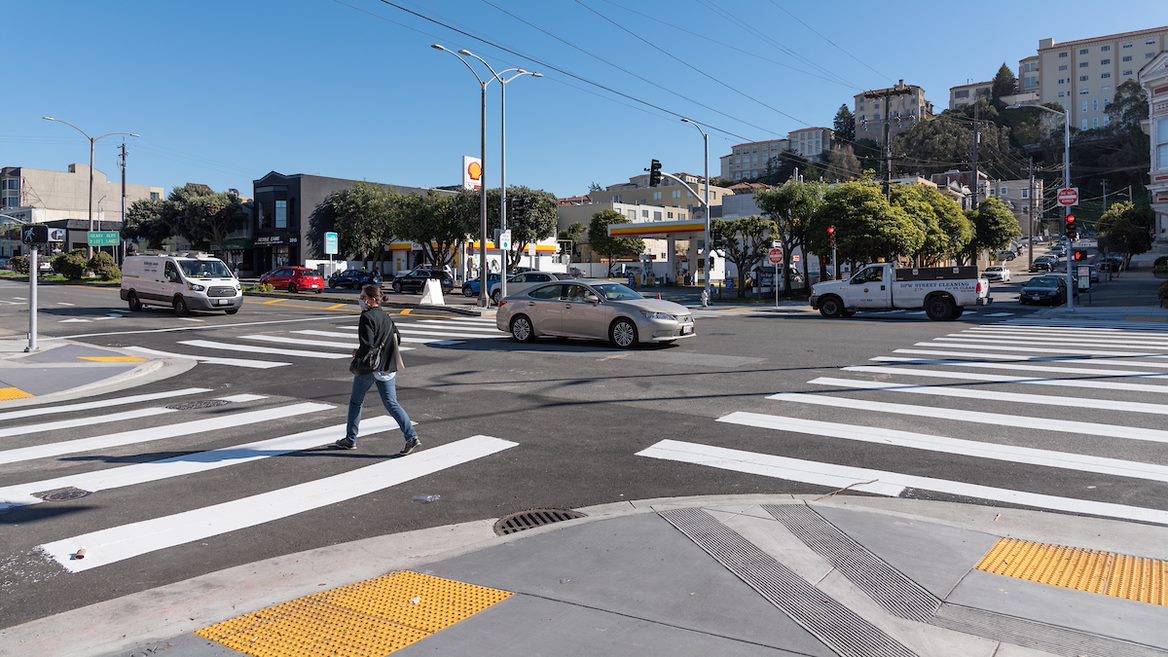 The Geary Rapid Project may be best known for helping to make 38 Geary trips—well, more rapid. But, along with improving transit performance and reliability along a three-mile stretch of Geary, an equally important feature of the project is to make the streets safer.

Geary is part of the high-injury network, and people walking there are eight times more likely to be involved in a serious or deadly collision than the average San Francisco street. Highway-like conditions on Geary Boulevard in the Western Addition make for challenging crossings. And the Tenderloin to the east, with its high concentration of children, seniors and people with disabilities, is uniquely vulnerable to traffic violence.

Fortunately, many of the safety improvements included in the Geary Rapid Project have already been completed, with more underway. Here are a few highlights:

Based on advocacy from local communities, we also added safety improvements that weren't envisioned in the initial Geary Rapid Project design. For example, a new traffic signal will be installed at Commonwealth Avenue. "The crosswalk on Geary at Beaumont and Commonwealth has been a dangerous intersection for many years," noted Tom Barton, a long-time Richmond resident who campaigned for the signal. "Having a crossing signal there will provide a safe way to cross, especially with heavy traffic, for myself and families, and other people crossing there."

Last summer, following a tragic fatality at Geary and Gough, the SFMTA met with District Supervisors Preston and Stefani as well as local residents, who expressed a desire for additional safety measures such as reducing the speed limit near senior facilities. While existing state law makes it difficult to lower speed limits, the SFMTA was able to make use of a seldom-used exemption to reduce the speed limit on Geary from 35 to 25 mph on blocks near senior centers: between Gough and Laguna, Steiner and Scott, and Baker and Lyon streets.

Final safety improvements planned as part of the Geary Rapid Project include building a new signalized crosswalk at Buchanan Street, completing the remaining traffic signal upgrades and pedestrian bulb-outs and roadway restriping to “calm the Expressway.” Those are expected to be completed this summer.