Laying Out the Red Carpet for Muni’s Rapid Network

San Francisco has painted transit-only lanes red since 2013 to provide a stronger visual cue for drivers to avoid them, with the goal of making transit faster and more reliable.

The newest red lanes were added this weekend on two blocks of Judah Street, between 9th and 10th avenues and between 19th and 20th avenues as part of a fast-tracked segment of the N Judah Rapid project. The Muni Forward project includes proposals to add red transit lanes, replace some stop signs with transit-priority traffic signals to reduce delay, and extend boarding islands to allow for two-car trains, all in conjunction with improvements in the Sunset Tunnel. 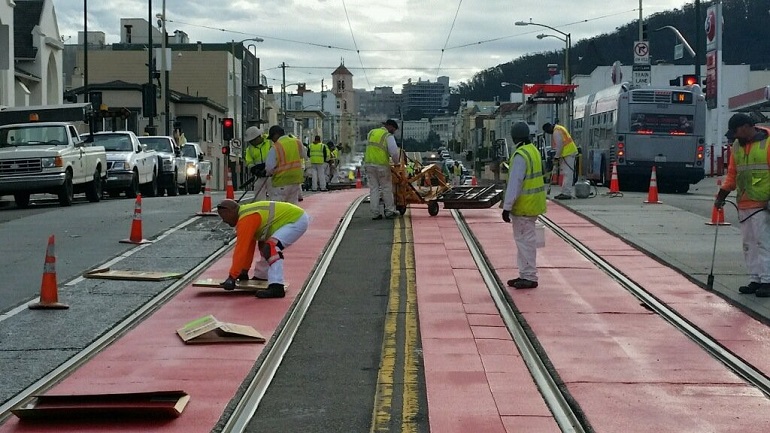 This weekend crews installed the red lanes on Judah Street with UCSF in the distance.

Meanwhile, on the other side of the city paint crews remain hard at work installing red transit-only lanes on Mission Street between South Van Ness Avenue and Cesar Chavez Street as part of the 14 Mission Rapid Project. For more details visit last month’s blog Creating a Smoother Muni Ride on Mission Street. 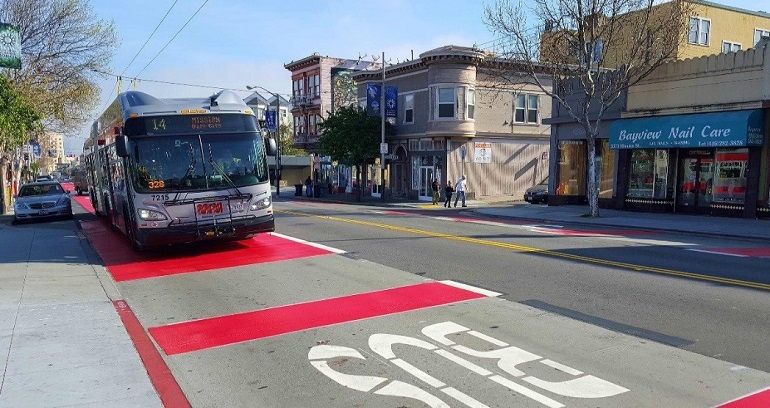 Earlier this month, the 14 Mission buses started a smoother ride over red lanes on Mission Street.

Judah and Mission streets are following in the footsteps of Church, Market, 3rd, Geary, O’Farrell, Haight and Powell streets – some of the first transit corridors to receive a red paint makeover.

The SFMTA got the green light to paint red transit-only lanes in 2012 from the California Traffic Control Devices Committee and the Federal Highway Administration as an experimental measure to improve driver compliance with transit-only lanes. If proven to be a success, the red transit lane treatment could become a national standard for transit-only lanes, similar to green bike lanes.  The red paint treatment is already recommended in the National Association of City Transportations Officials Urban Street Design Guide.

Before they were painted red, most of San Francisco’s transit-only lanes were marked only with painted messages and posted signs.  The below pictures comparing the transit-only lanes on Mission Street and red lanes on O'Farrell Street show the difference some color can make.

The next in line for the red carpet is the Geary corridor Market to Stanyan streets, which could begin installation 2017 pending approval of the Geary Bus Rapid Transit (BRT) project. This would extend and fill in the gaps of the existing red transit-only lanes on Geary and O’Farrell between Powell and Gough streets.

The initial roll-out of red transit lanes east of Stanyan Street would bring near-term transit and safety benefits to the corridor’s 52,000 plus daily riders prior to the installation of center-running BRT lanes in the Richmond. A similar BRT project on Van Ness Avenue is expected to break ground this spring.

Some Muni riders have even taken to Twitter to let us know they appreciate the change: 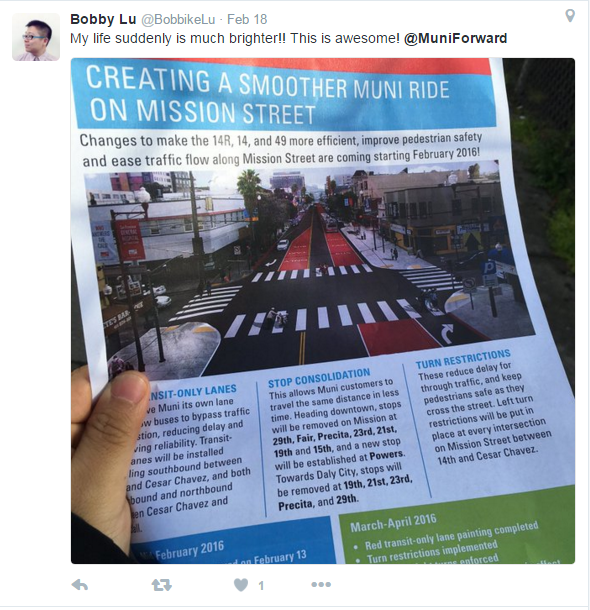 While we continue to evaluate the impact of red transit-only lanes, the outlook is promising for Muni riders getting used to the red carpet lifestyle.