Last October when California Assembly Bill 43 (Friedman) was signed into law, we posted a blog about the new law about which gave cities new flexibility in setting speed limits—specifically reducing them. “Speed Management,” a reference that is still in development, focused on reducing speed limits in key business activity districts where at least 50% are dining or retail. Since the bill went into effect last month, we’ve already started lowering speed limits by 5 MPH (from 25 MPH to 20 MPH) in the first phase of approved corridors, four of which have been implemented:

The remaining corridors of this phase scheduled to completed through April 2022 are scheduled as follows: 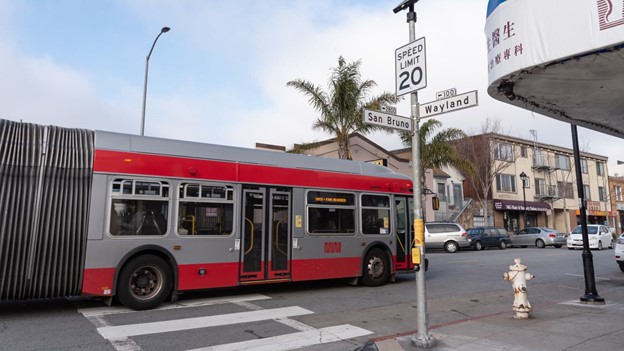 Phase 2 proposes an additional 35 business activity districts and corridors and will go to the MTA Board for legislation this spring with a goal to begin installation in Summer 2022. Additional locations in Phase 3 will be proposed later this year. Check out the updated map below for more information. 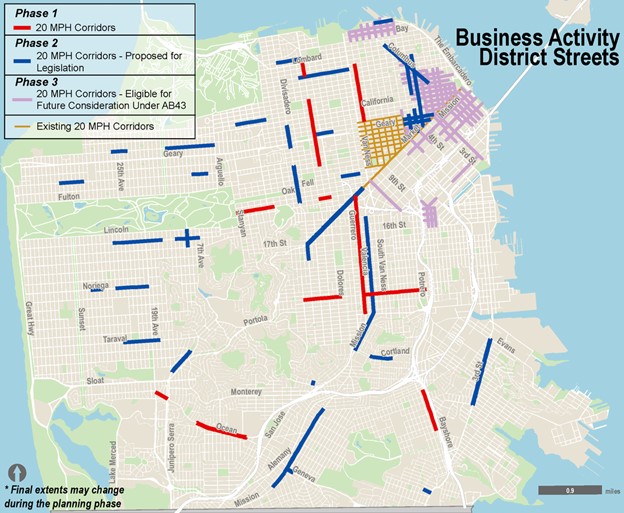 Speeding Kills – Just 5 miles over the limit is twice as likely to kill.

Because speeding is the leading cause of traffic deaths and severe injuries in San Francisco, slowing speeds is the single most effective tool for achieving Vision Zero, the citywide commitment to ending traffic deaths. This current speed reduction work builds off other SFMTA programs to create safer streets and encourage slower streets such as the first neighborhood-wide 20 MPH speed limit changes in the Tenderloin or reducing speeds on Market Street to 20 MPH. Through this collective speed management work, 75 miles of streets across the city will have 20 MPH speed limits. Over 50% of these streets are on the High Injury Network – the 13% of streets where more than 75% of severe and fatal crashes occur.   Find more information on the Speed Management project page.

Vision Zero (www.visionzerosf.org) – Vision Zero is the City’s commitment to prioritizing street safety and ending traffic deaths. These deaths and injuries are unacceptable and preventable, and San Francisco is committed to stopping further loss of life. The full program is outlined in the Vision Zero SF Action Strategy.