In March 2021, the SFMTA Board of Directors voted to reduce the neighborhood speed limit to 20 miles per hour on 17 corridors. This is in addition to new “no turn on red” regulations at over 50 intersections, which were approved at a February 2021 Public Hearing. The Tenderloin will be the first neighborhood in San Francisco to have widespread speed limit reductions. This builds on past neighborhood-wide efforts in the Tenderloin, including daylighting and signal retiming. These changes are part of the city’s Vision Zero initiative, aimed at eliminating traffic fatalities and severe injuries through comprehensive, community-based approaches. 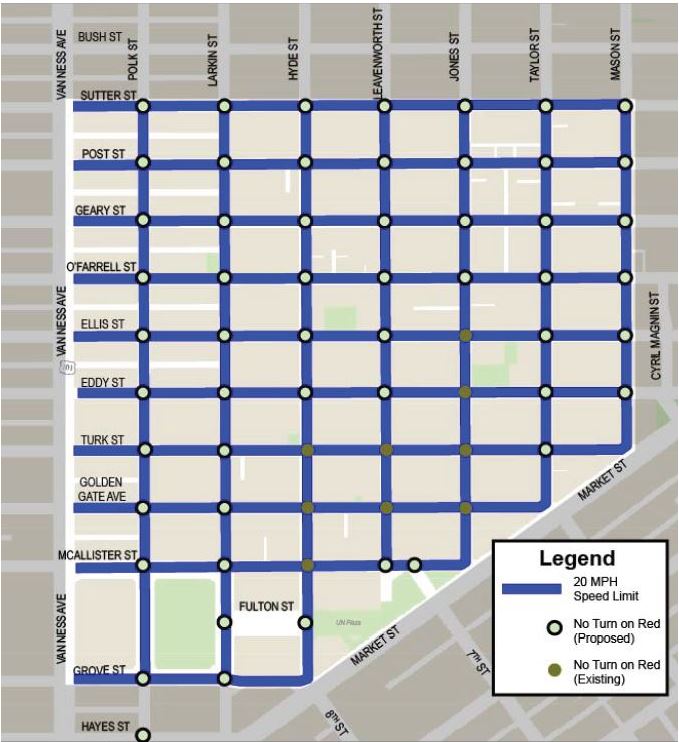 Map identifying all Tenderloin corridors and intersections where 20 mph speed limits and No Turn on Red will be implemented.

Severe and fatal crash incidence is ten times higher in the Tenderloin than in the rest of the City, according to SFPD data from 2014-2019. In fact, every street in the Tenderloin is part of the city’s Vision Zero High Injury Network: the 13 percent of San Francisco streets that account for 75 percent of the city’s severe traffic injury collisions and fatalities. In this high-density neighborhood, slowing speeds and eliminating turns on red lights will make streets and crosswalks safer.

Studies show that lowering speeds greatly improves a pedestrian’s chance of survival in the event of a collision and that vehicle speed is the number one predictor of crash severity. A pedestrian struck by a vehicle traveling 20 mph vs 25 mph has double the chance of surviving. Until the recently approved changes, most Tenderloin streets have had a speed limit of 25 miles per hour. Lowering the speed limit from 25 mph to 20 mph on Tenderloin streets is another bold approach we are taking to make the neighborhood a safer place for pedestrians. Every applicable corridor in the neighborhood will have the lowered speed limit. 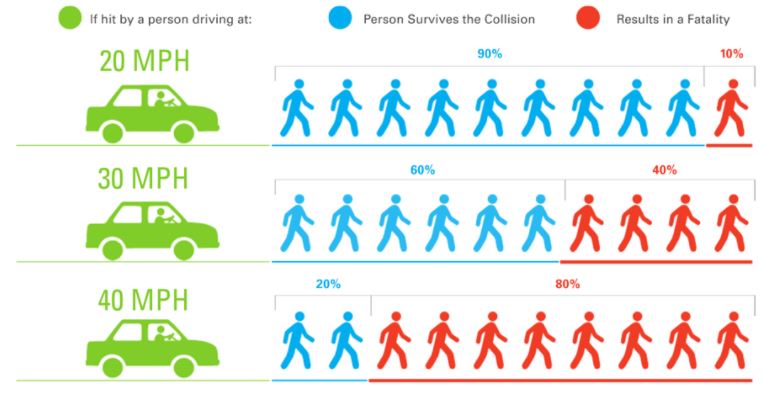 Graphic showing the relationship between vehicle speed and safety.

Prohibiting turns while facing a red traffic signal is a tried and proven method for reducing traffic collisions and keeping crosswalks clear of vehicles so that pedestrians may safely cross. This includes right turns, as well as legal one-way street to one-way street left turns. We will be piloting this new program at approximately 50 intersections in the Tenderloin. The intersections that are excluded either have an existing turn prohibition, pedestrian scramble, or are not signalized.

SFMTA will be posting new speed limit signs on each block of the Tenderloin throughout Spring 2021 and have placed electronic signage at key locations to alert drivers of the traffic changes. The agency is also running a multilingual digital ad campaign directed towards drivers in the Tenderloin and will be installing transit shelter posters and light pole banners in multiple languages to alert drivers, visitors, and residents of the change. 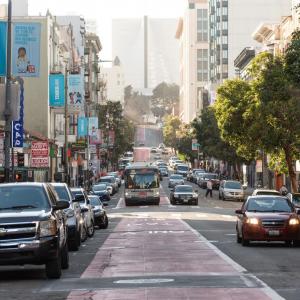