Pedaling Forward: A New Guide to Our Vision for a Bike-Friendly SF 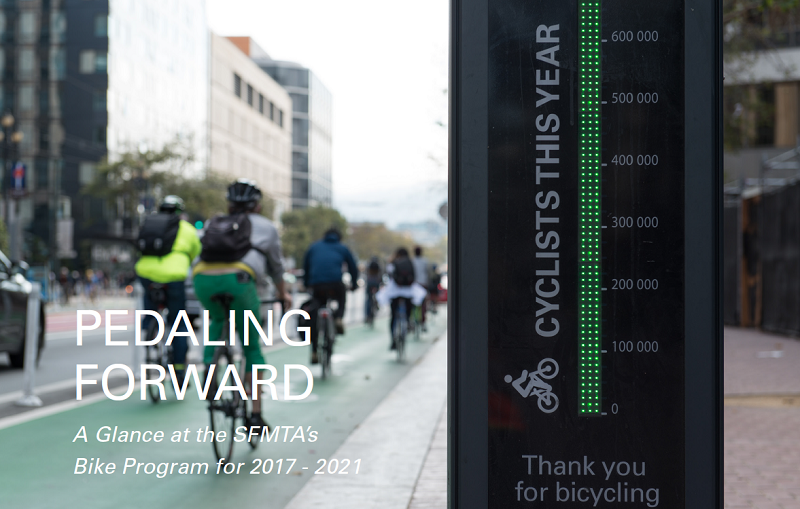 More and more people in San Francisco see their bicycle as a convenient way to get around as we invest in a network of safer, better bikeways. As these bikeways grow, so does interest about what the future of bicycling in San Francisco will look like.

Today, we’re releasing a new document to share our vision and the plans in place to build a better city for biking: Pedaling Forward: A Glance at the SFMTA’s Bike Program for 2017 - 2021.

This guide helps explain our approach to creating a bike-friendly city and the current five-year outlook on our city’s strategy to invest more than $112 million in 92 miles of bike infrastructure projects, as laid out in our Fiscal Year 2017-2021 Capital Improvement Plan (PDF).

Creating a connected network of safe, low-stress streets for bicycling is crucial to keeping our city moving sustainably and to reaching the city’s Vision Zero goal to eliminate all traffic fatalities. 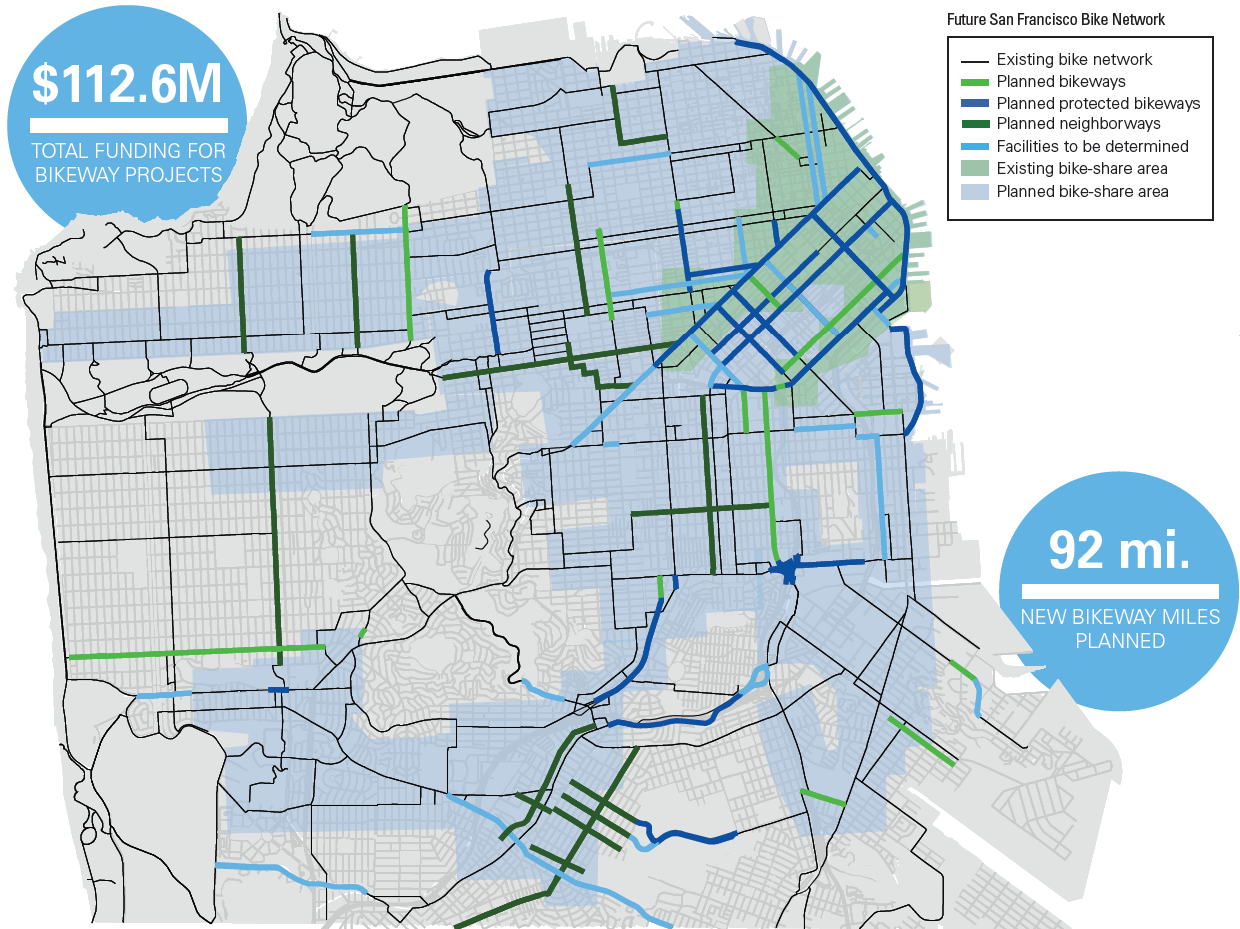 These projects can be broken down into:

A rendering of the Masonic Avenue Streetscape Project, which will include protected bikeways.

These projects form the backbone of our vision for a sustainable transportation system that includes a new generation of bicycle-friendly streets that’s easy to use, whether you’re eight years old or 80.

One reason we need more bike-friendly streets is because San Francisco is getting a bigger and better bike sharing system, which will add a new generation of bike riders. Following the success of the Bay Area Bike Share pilot program, the SFMTA is working with sponsor Ford Motor Co. and other partners to expand the system now known as Ford GoBike. In San Francisco, the current fleet of 350 bikes will grow ten-fold to approximately 4,500 bikes starting in 2017 and continuing through 2019!

Of course, building a bikeway is not always simple. As we implement these projects, we have to consider factors to ensure we comply with transportation codes, coordinate with other agencies, use public resources efficiently and we work closely with community partners to build public support.

We know that more people would bike if streets felt safer – and not just because we’ve seen it happen here and in cities around the world. In 2015, we commissioned an independent research study to better understand the attitudes San Francisco residents have towards biking. 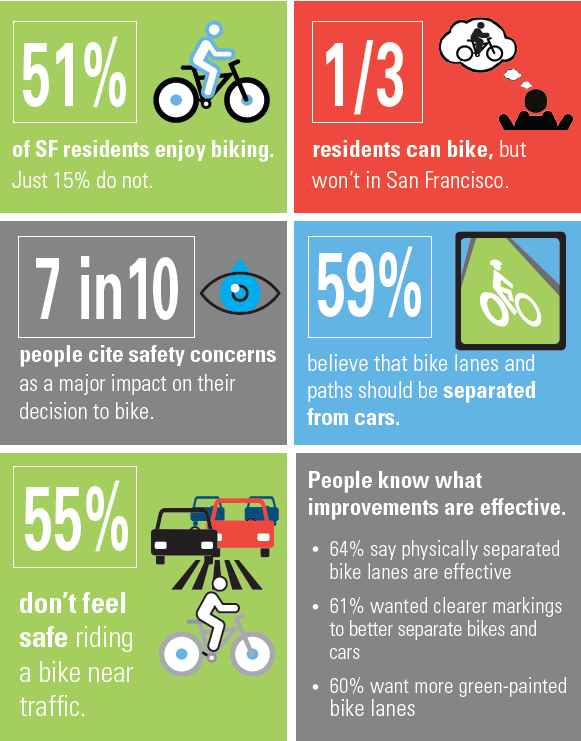 Better bikeways help everyone, no matter how you travel. Think of it this way: Each person on a bike is one less person in a traffic jam, competing for a parking spot or squeezing onto a crowded bus.

When we make streets safer for bicycling, we also make them safer and more predictable for people walking and driving. We give residents and visitors of San Francisco a healthier, more affordable option to get around. And businesses get a boost when we making it easier for people to get to work, shopping, dining and entertainment destinations. 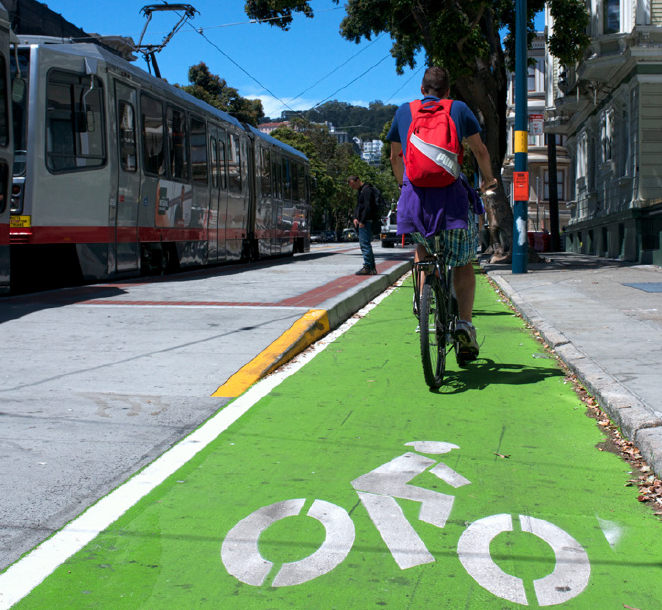 A protected bikeway and transit boarding island at Duboce Avenue and Church Street.

As our city’s population grows, providing better ways to get around is more important than ever. Every trip made on a bike instead of a car means less traffic congestion on our streets, less time spent searching for parking, less air pollution and more opportunities to chat with your neighbors. That makes San Francisco more livable for everyone.

The good news is our efforts toward to encourage sustainable options like bicycling are working. On an average day, San Francisco already adds more than four new bicycle commuters and sees an estimated 82,000 bike trips. Since 2006, biking in SF has increased 184 percent, and among commute trips, bicycling has increased from 2.3 percent to 4.3 percent.

We’ve come a long way since San Francisco’s first bike lane was painted in 1971. But it’s become clear in recent years that on streets with vehicle traffic, the conventional bike lane stripes and stencils used in American cities don’t meet the needs of the average person who wants to ride a bike to comfortably.

The demands on our streets are evolving, and the shape of our streets has to evolve with it. This is how we plan to make that happen.

You can see the full Pedaling Forward report on our webpage.