Road Trippin' Through The City This Weekend

On both Saturday and Sunday from 9:30 a.m. to 6 p.m., the southbound J Church Line will be switching back at 30th and Church streets due to construction work near the Highland Avenue bridge by San Jose Avenue. Bus shuttles will be providing service between 30th and Church streets and Balboa Park. Street closures on San Jose Avenue between Randall Street and Glen Park will be in effect during construction work hours.

The Muni Metro subway continues to close early each night at 9:30pm for system upgrades. Heads up to all Giants fans, we have revamped our post game night service plan. Following night games, all outbound shuttle trains from AT&T Park will be allowed through the subway during the closure and will make stops at all stations. These shuttle trains will be routed out of the subway either on the N Judah or M Oceanview lines.

The San Francisco Giants continue their home stand through Sunday with games against the Houston Astros and Washington Nationals. Muni service will take to and from the ball park. On Saturday the Off Broadway Summer Pop Up will take place near Kearny and Pacific affecting the 10 Townsend and 12 Folsom/Pacific routes, while on Sunday there will be the Community Hair and Beauty Awareness Expo along Fillmore between Eddy and Ellis streets affecting the 22 Fillmore. Be sure to head over to Pier 70 in Dogpatch this weekend for a tasty good time at La Cocina’s Street Food Festival.

A Saturday in the park, listening to Italian songs, the Festa Coloniale Italiana, presented by the San Francisco Italian Athletic Club in celebration of its 97th anniversary, is a free, family friendly event. Festivities will take place along Stockton Street between Union and Filbert streets with entertainment that will include Italian song and dance performances plus a master lesson in the art of pizza tossing. In addition, there will be booths for specialty foods, arts and crafts, and wine tasting.

Due to street closures, parking will be limited and congestion is expected to be heavy. Consider using public transportation. Muni’s 8 Bayshore, 30 Stockton, 39 Coit, and 45 Union/Stockton will get you to North Beach.

Muni service note: due to street closures the 39 Coit will have a re-route, while other service routes may see residual delays due to increased ridership.

It’s a two-for-one events special in the Excelsior as Sunday Streets will host its sixth event of the season on Mission Street between Theresa Street and Geneva Avenue, in conjunction with the Excelsior Arts and Music Festival. Family friendly activities will include an art walk, music, dance and theatrical performances, Zumba, free bike repairs, and so much more.

Due to street closures, congestion in the neighborhood will be heavy. Use public transportation to get to all the festivities. The 8 Bayshore, 14 Mission, 14R Mission Rapid, 29 Sunset, 43 Masonic, 44 O’Shaughnessy, 49 Van Ness/Mission, and 52 Excelsior will get you close to the events.

Muni service note: due to street closures the 14 Mission, 14R Mission Rapid, 29 Sunset, 49 Van Ness/Mission, and 52 Excelsior will have re-routes. 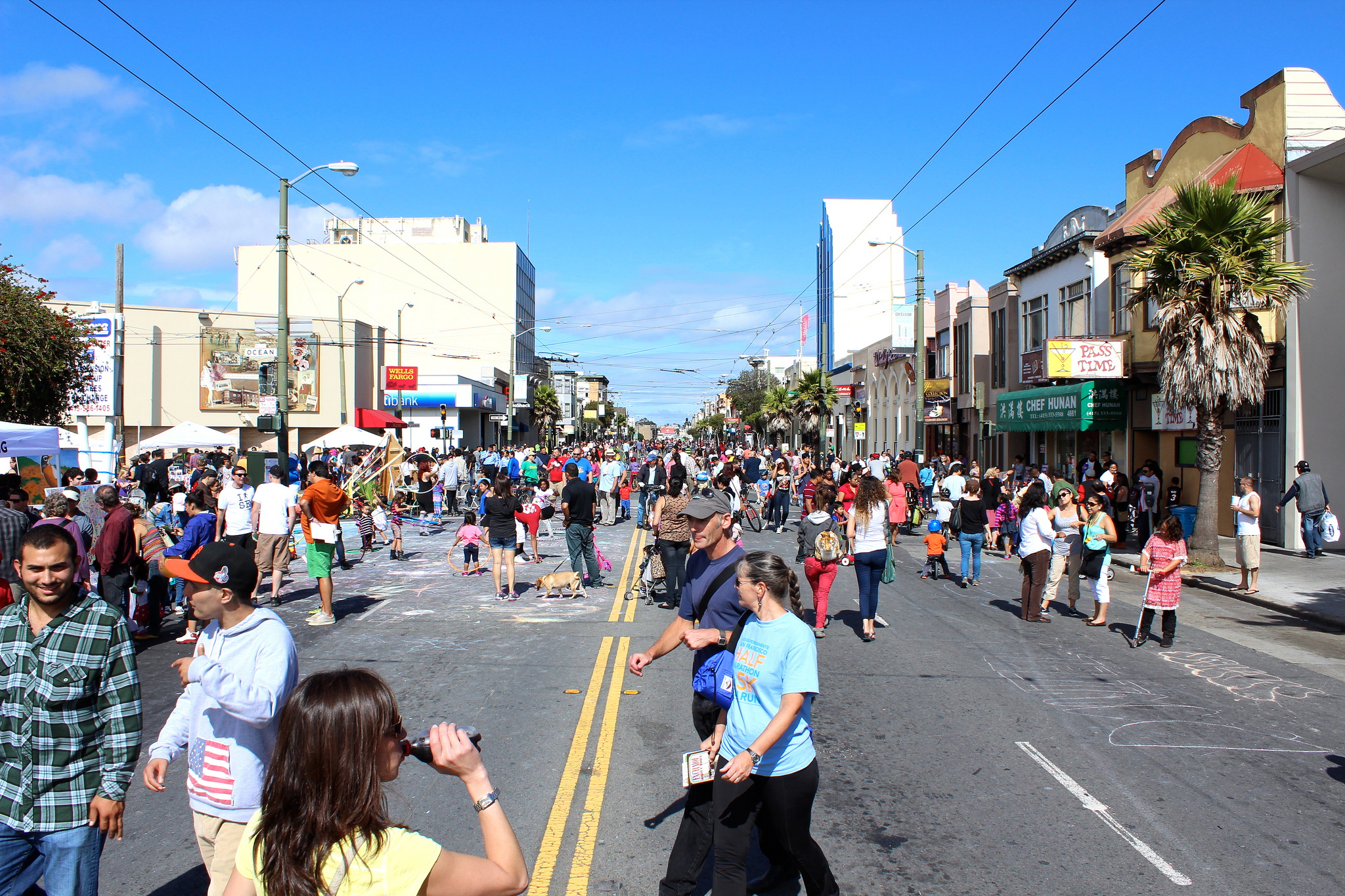