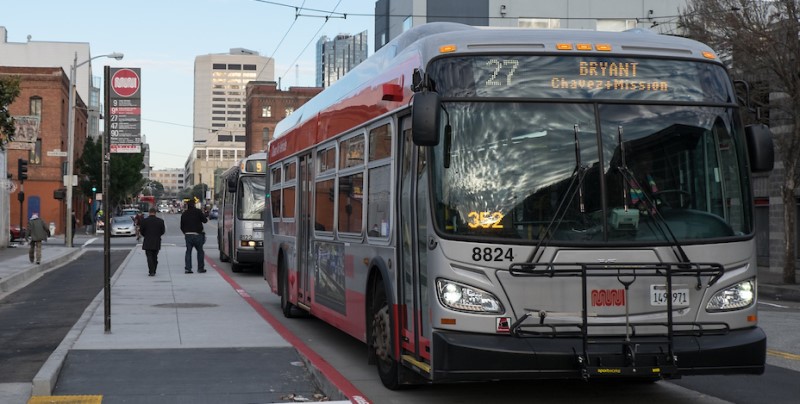 We have a number of stop and routing changes starting on August 10th that will improve safety, reliability and consistency for several of our routes. These changes will affect the 27 Bryant, 54 Felton, 57 Parkmerced and the 25 Treasure Island.

On Saturday, August 10, the 27 Bryant will begin traveling its new route on Eddy Street and related bus stop removals will also be in effect. Safety improvements for people walking will be implemented in the weeks that follow. Based on feedback from more than 500 community members, these changes kick off the initial phase of the 27 Bryant Project and will deliver transit reliability and safety benefits in advance of the full project construction, scheduled to start in 2021. View the map for specific service changes.

The 27 Bryant Project focuses on improving the route north of Market Street in the Tenderloin and Nob Hill neighborhoods where buses experience the most delays and slowest travel times. The project aims to make the 27 Bryant more reliable and improve traffic safety for people walking along the route between the intersections of 5th at Market and Jackson at Van Ness. By focusing on the slowest segment, transit reliability can be improved for the entire route, better serving customers in SoMa and the Mission neighborhoods as well. Learn more about the 27 Bryant Transit Reliability Project.

On Saturday, August 10, the 54 Felton will reroute between Geneva and Avalon to offer a more direct route running both ways on Moscow Street. Feedback from residents, 54 Felton customers, neighborhood schools, and Supervisor Safaí prioritized reliability and safety as the main focus for this project. Here is a map with the affected stop changes.

The project improvements will provide a more reliable ride, fewer delays, and traffic safety measures such as a new 4-way stop sign at Moscow and Excelsior streets. The 54 Felton will continue to serve high schools (June Jordan School for Equity and City Arts and Tech) and residents near Prague Street.  Learn more about the 54 Felton project.

On Saturday, August 10, the 57 Parkmerced headed north from Daly City BART to Brotherhood Way will be rerouted to reduce evening delays and add service to a new supermarket. This change is to avoid the congestion on northbound Highway 1 (Junipero Serra) between John Daly Blvd. and Brotherhood Way. This new routing will serve a new supermarket coming to the area on Alemany at Worcester & Arch later this fall.

Specific changes include discontinuing the Junipero Serra and Palmetto bus stop. This stop will still be served by the inbound 28 19th Avenue. There is also a new inbound and outbound stop at Alemany & St. Charles and Arch and Alemany. Here is a map with the affected stop changes.

The bus deck at the Salesforce Transit Center will re-open for the 25 Treasure Island, as well as for AC Transit & WestCAT service, on Sunday, August 11, 2019. The new bus deck and routing will have a direct link to and from the Bay Bridge. Greyhound & Amtrak will move in sometime in September. Here is a map with the affected stop changes.

We are always looking for ways to improve your commute and your feedback is appreciated. Please leave us a comment below.