The Weekend: Bluegrass, Baseball and Bridges

Starting tomorrow night at 8 p.m., Howard Street between Third and Fourth streets will be closed until 8 p.m. Saturday, October 9 due to Salesforce’s Dreamforce convention at the Moscone Center. The northbound 8 Bayshore, 30 Stockton, and 45 Union/Stockton routes may experience service delays in that area due to increased traffic. 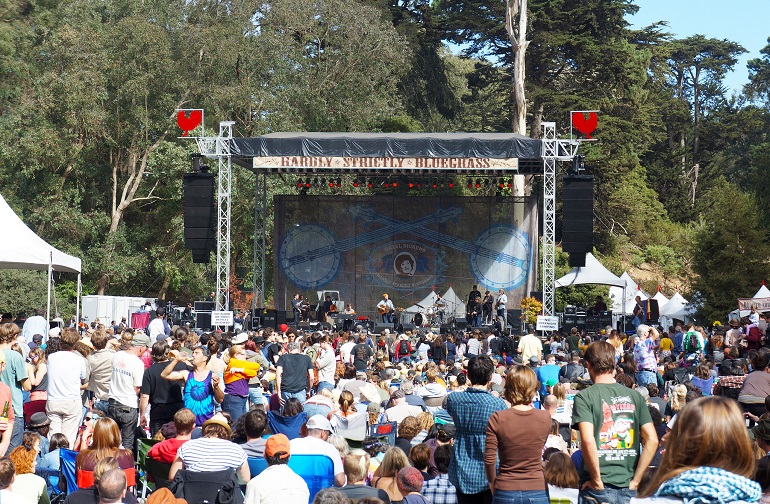 The first two weekends of October will be packed with big time events. This Sunday, in addition to the Hardly Strictly Bluegrass festival and Giants baseball, there is also the Bridge to Bridge Run beginning at 9 a.m. along The Embarcadero from the Ferry Building to the Golden Gate Bridge. Then, it’s the Castro Street Fair in the heart of the neighborhood from 11a.m. to 6 p.m. (the F Market, 24 Divisadero, 33 Ashbury/18th Street, 35 Eureka and 37 Corbett will be affected).

Golden Gate Park, in particular Hellman Hollow and Lindley and Marx meadows, will be ringing with the sounds of fiddles, banjos, and mandolins during three days of free music in the park. Now in its 16th year, the Hardly Strictly Bluegrass festival will give fans seven different stages to choose from and will feature sets from Chris Isaak, Cyndi Lauper, Jackson Browne, Boz Scaggs, Emmylou Harris and many more.

Take advantage of the MuniMobile app to purchase your fare in advance so you don’t have to concern yourself with exact change or waiting in a ticket line.

Street parking will be limited. Using public transportation may be your best option. The following routes will take festival goers either directly to Golden Gate Park or drop you off in the vicinity of the park: 6 Haight/Parnassus, 7 Haight/Noriega, 7R Haight/Noriega Rapid (Friday), 18 46th Avenue, 28 19th Avenue, 28R 19th Avenue Rapid (Friday), 29 Sunset, 31 Balboa, 33 Ashbury/18th Street, 43 Masonic, and the 44 O’Shaughnessy.

Pre- and post- supplemental event service will be as followed:

Boarding locations for the 5X Fulton Express will be on Fulton Street at 36th, 30th, and 25th avenues and will terminate at Hyde and Grove streets near the Civic Center.

As the calendar has turned to fall, baseball’s focus now shifts to the post-season and locking up a playoff position. With only five games left in the regular season, the Giants still find themselves in the hunt for a wildcard spot, so this home stand is make or break. Tonight and tomorrow the Giants host the Colorado Rockies with the division champions, the Los Angeles Dodgers, coming into town on Friday for a memorable three game series, as these games will also be the final three games of Vin Scully’s legendary career.

Remember to use the MuniMobile app when boarding the N Judah, T Third, E Line, 10 Townsend, 30 Stockton, 45 Union/Stockton and 47 Van Ness for service to and from AT&T Park.

Visit our service alert page for complete details on taxis, biking and parking during baseball season.

On Tap for next weekend: Fleet Week and the Italian Heritage Festival