Since the Central Freeway was taken down after the 1989 Loma Prieta earthquake, Hayes Valley has replaced freeway overpasses and on-ramps with dense housing and shops and restaurants that attract people from all over the Bay Area.  The neighborhood’s recent growth and its proximity to the City’s arts and civic districts have placed new demands on its streets and curbs. Changing lifestyles, the development of thousands of new housing units nearby in The Hub, and the emergence of micro-mobility, car-share, ride-hailing and food delivery services will require a new way to think about how we use the curb.

The SFMTA Parking & Curb Management group teamed with the Hayes Valley Neighborhood Association (HVNA) to develop a forward-looking parking and curb management plan for Hayes Valley.  The SFMTA and the HVNA initiated this effort to implement the transportation goals expressed in the Market-Octavia plan and to address lifestyle changes and emerging mobility trends.

The plan focuses on two key issues: the increased demand for Residential Permit Parking (RPP), and the impacts from greater use of alternative travel modes, including ride-hail services, carshare, bike share and micro-mobility vehicles.

The plan passed the SFMTA Board of Directors in July 2021. Implementation of RPP Area HV will be largely Curb changes on Hayes Street and Octavia Street will be completed in early 2023. 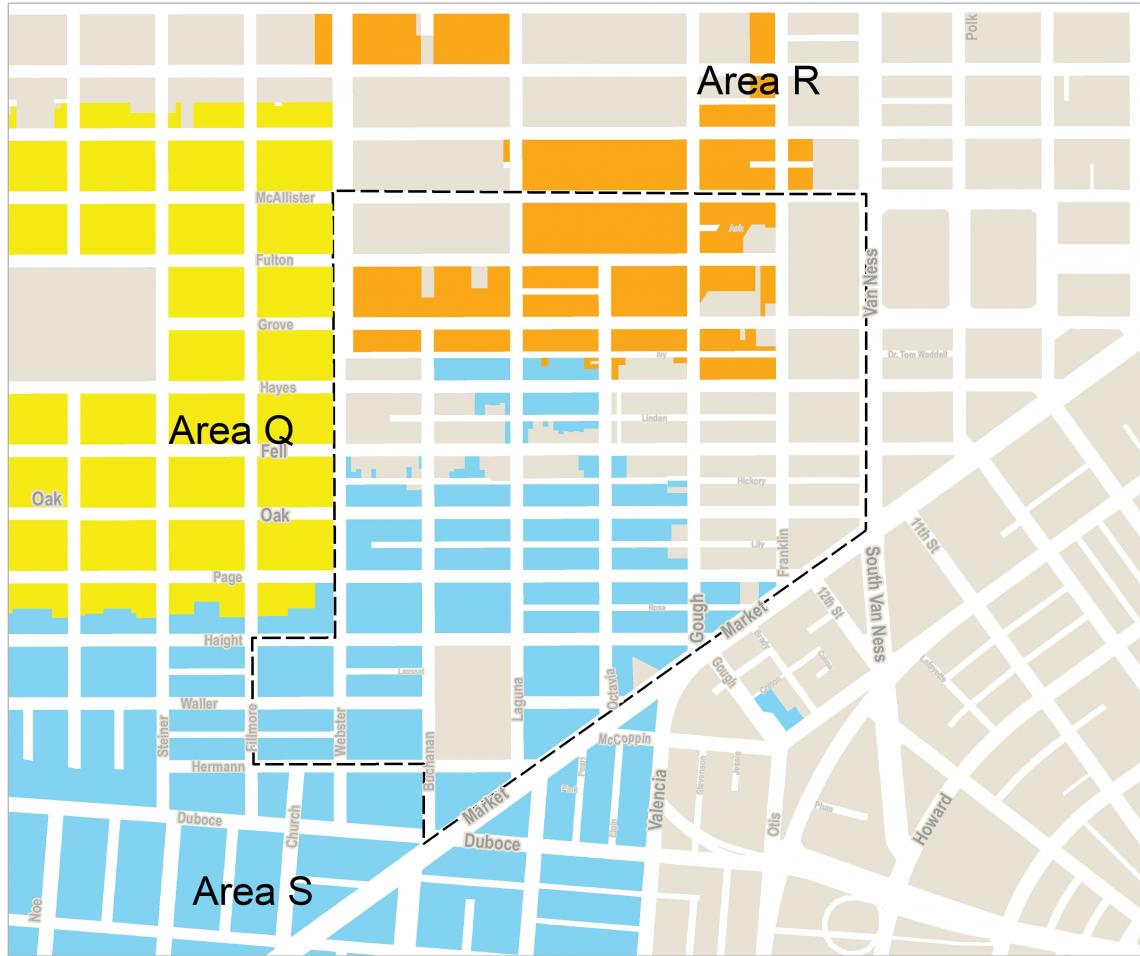 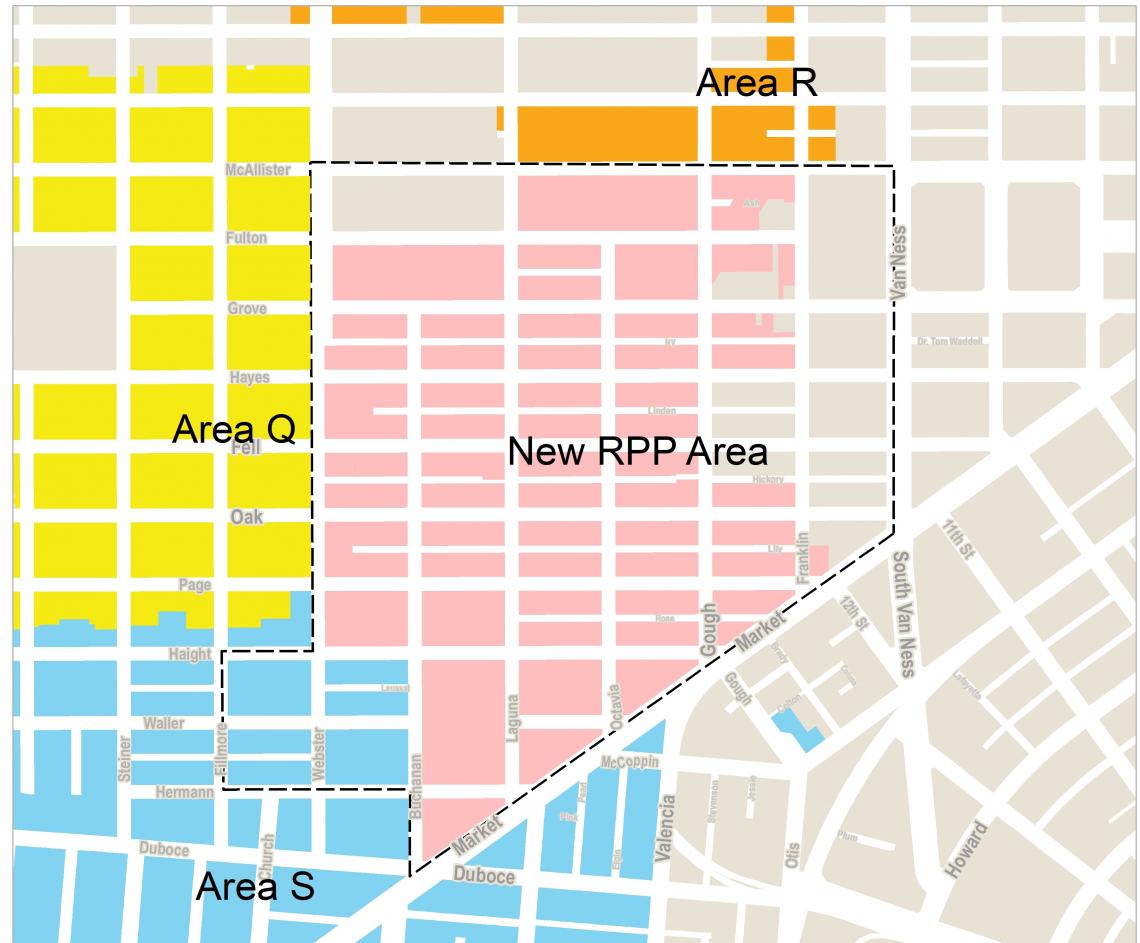 To respond to the increased pressure on residential parking in the Hayes Valley neighborhood, SFMTA created a brand-new RPP area from parts of the existing RPP areas R and S as well as currently unregulated blocks in the neighborhood. This increases the number of households that will be eligible for permits while also increasing the number of spaces prioritized for residents. Additionally, by severing Hayes Valley from Area S, the largest RPP area in the city, this plan will reduce the use of Hayes Valley residential parking spaces by commuters from inside Area S but outside the neighborhood.

The new area’s rules are tailored to the specific goals and needs of the Hayes Valley neighborhood. Each household is limited to two annual automobile permits per year, down from the cap of four in most other areas. If a household has a third driver and there is availability near their home, they may receive a third permit. Motorcycle, childcare, and medical care permits do not count against the limit.

Along the boundaries of the area, there will be streets where permitholders of both the new area and the neighboring areas will be able to park (sometimes called “buffer zones”).

Residents of the area who previously had an Area R or Area S permit have been transitioned to RPP Area HV. If you live within Area HV and did not previously have a permit, you can apply for an Area HV permit online. Once enforcement begins on November 7, 2022, permits will only be valid within that area, and likewise Area R and Area S permits will not be valid in Area HV except where signed. Area HV permits will expire on August 31, 2023. This webpage contains the application for annual RPP permits.

Annual permits for Area HV will primarily be virtual permits instead of the traditional sticker decal. License plates will be read by cameras on and checked by Parking Control Officers against the permit database. You can learn more about how virtual permits work from this blog post. 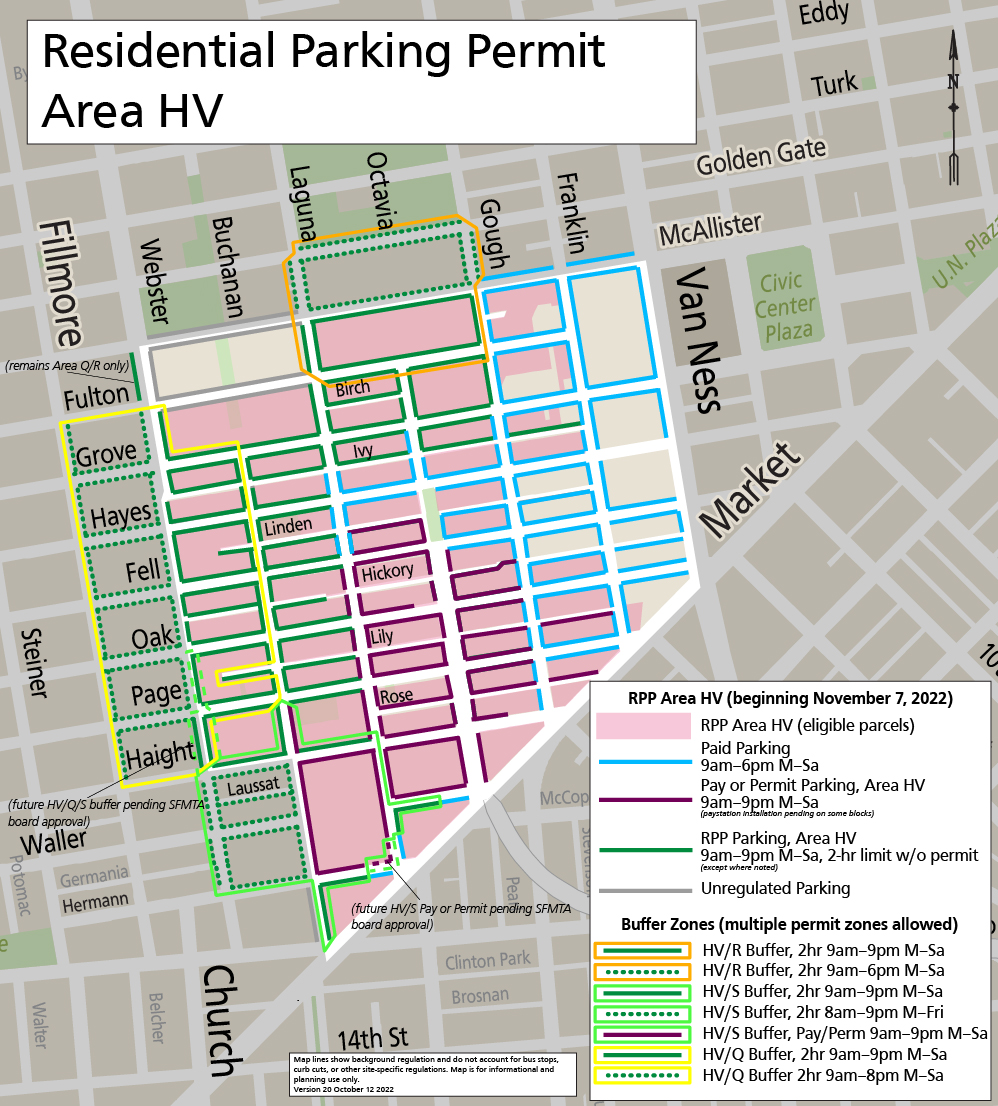 Detailed text and PDF map of the proposal available in the legislation.

Previously, on most residential blocks in Hayes Valley, residents could park for an unlimited time but non-residents and non-permitholders are limited to two hours on most days. This free parking window is often abused by those from outside of the neighborhood, making it more difficult for neighbors and short-term visitors to find parking. Conversely, visitors to the neighborhood who want to stay longer while still wanting to follow the rules must either get a visitor permit or move their car every two hours.

To create more parking availability and offer more flexibility to residents, the Hayes Valley Parking and Curb Management plan introduces Pay or Permit parking to 31 blockfaces near Octavia and Hayes Streets. On these blocks, permitholders can still park for as long as they want, while visitors must pay to park for the time they need. By having those from outside the neighborhood pay for parking, it induces turnover and increases availability on the street. Paid parking is also easier to enforce than two-hour parking because it does not require enforcement officers to chalk tires. You can read more on the Pay or Permit Parking webpage. 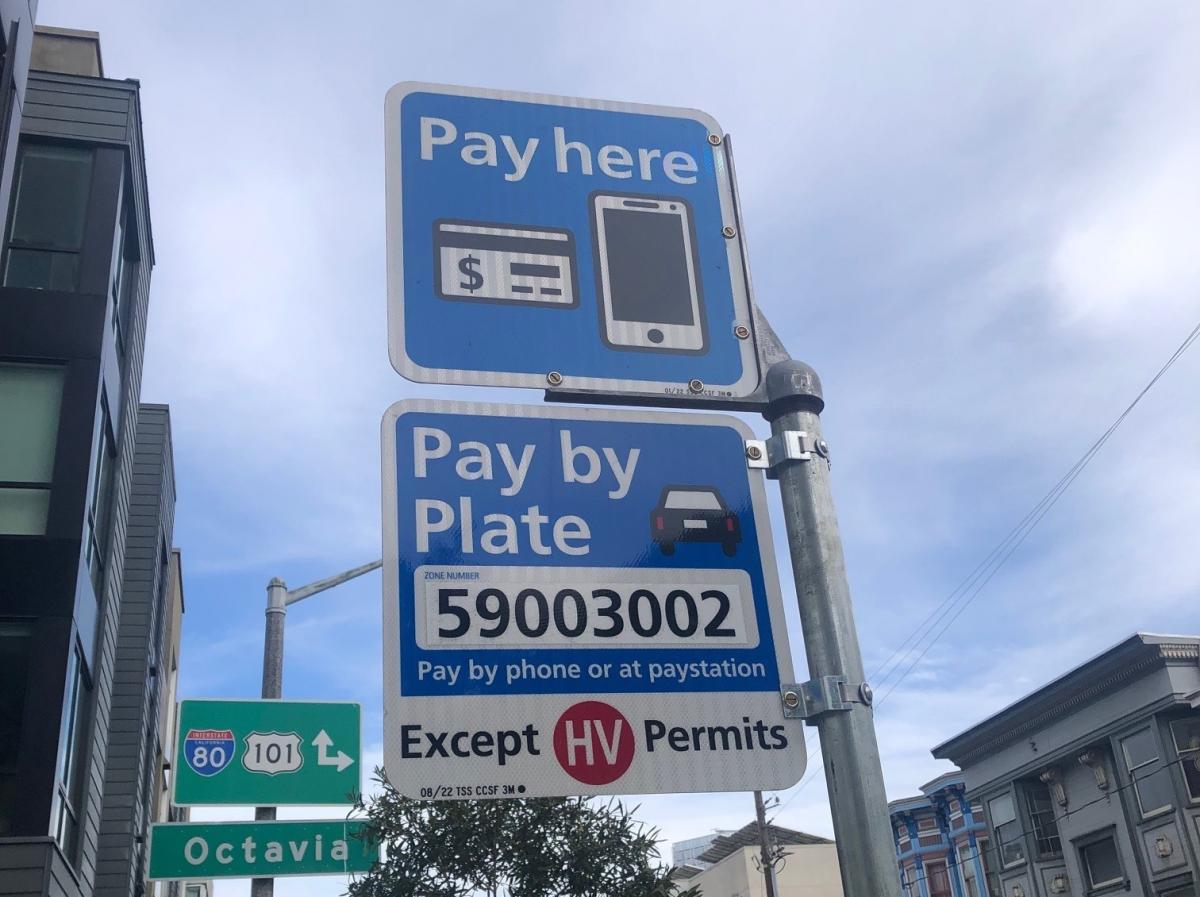 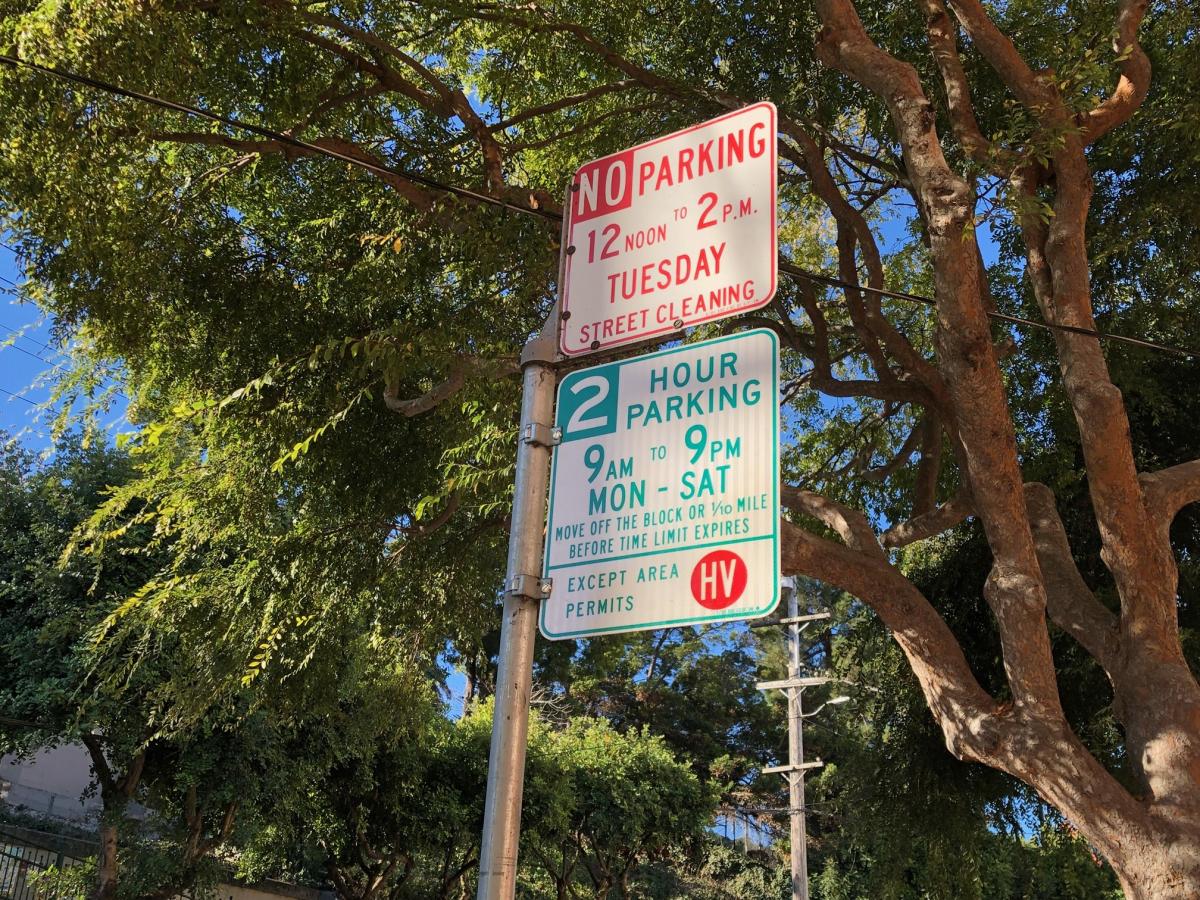 In addition to the Pay or Permit blocks, Laguna Street between Hayes and Fell, and Linden Street between Franklin and Gough, are being converted to metered parking to support businesses in the area. There will also be additional blocks of traditional RPP, with a two-hour time limit for visitors, added in areas where RPP eligibility has been expanded. The plan also standardizes the time of enforcement across the area, with RPP and Pay or Permit parking running from 9am to 9pm Monday through Saturday. (General metered parking remains enforced Monday through Saturday, 9am to 6pm)

More Space for Deliveries and Passenger Loading on Hayes Street

Hayes Street is the commercial core of Hayes Valley, attracting shoppers and diners from across the region to the street’s boutiques, restaurants, and public space. It is also a transit route for westbound buses on the 21 Hayes Muni route and crossed by an important north-south bike route. The corner of Hayes and Octavia is one of the busiest spots for Uber and Lyft pickups and drop-offs in the city, and the dozens of businesses that line the corridor receive deliveries at all times of day. Additionally, several restaurants have set up Shared Spaces dining zones in former parking spaces to better serve customers.

Currently, there is a paucity of loading capacity on and around Hayes Street. What zones do exist are often at odd times and squeezed between parking spaces. These zones, while requested by individual businesses and developments, are important tools for the entire corridor to reduce double-parking and other loading activities that create safety and congestion issues.  This proposal updates the sizes, times of operation, and location of loading zones to capture the needs of the corridor as a whole.

In 2020, SFMTA’s Parking and Curb Management group released its Curb Management Strategy, aimed at guiding the planning around curb space on corridors similar to Hayes Street. The recommendations include planning at a corridor level rather than storefront by storefront, relocating and expanding loading zones to facilitate their better usage, and adding capacity to better handle the delivery and passenger needs of the corridor.

We have made detailed diagrams for the 300, 400, and 500 blocks of Hayes Street and the 500 block of Octavia. In addition, a text version of these changes is available in the legislation.

The impact of the Shared Spaces has delayed the installation of loading zone changes associated with this project. We are currently in the process of finalizing details of the implementation of new loading zones and the extensions of existing zones on Hayes and Octavia Streets to accommodate deliveries and drop-offs. These changes will be installed in early 2023.

The SFMTA and the Hayes Valley Neighborhood Association have been collaborating since 2018 on this plan. The SFMTA conducted a community meeting on February 17, 2021 to go over the proposal. More than 20 community members joined the virtual event, and the presentation from that event is available on our website.

We have made available a selection of the questions we received before and during the meeting and the responses to those questions.  We also have made edits to the plan based on feedback we have received: expanding RPP eligibility further east to Gough Street and adding Pay or Permit and RPP eligibility to Lily Street between Franklin and Gough. We have also added paid parking to the east side of Gough between McAllister and Fulton as part of the plan.

SFMTA hosted an online community meeting and public hearing on April 29, 2021. We also accepted comments through a comment form. Comments received before and during the meeting have been posted and are in the "Related Links" section. The feedback we received before and at this meeting informed the changes made that were summarized in the above update.

The SFMTA Board of Directors approved RPP Area HV and related curb regulations on July 20, 2021.

SFMTA staff will distribute information to residents via vehicle fliers, letters, emails, and texts as the project is implemented.

Starting in late 2022, SFMTA will be monitoring parking occupancy, length of stay, and occupancy in the new area. We will also assess the effectiveness of Pay or Permit parking at ensuring availability for residents and visitors to the neighborhood and adjust regulations as needed. Pricing for meters in Hayes Valley are subject to demand-responsive pricing, where occupancy on a block determines whether the price increases or decreases.

Legislation for RPP and parking Changes in Hayes Valley