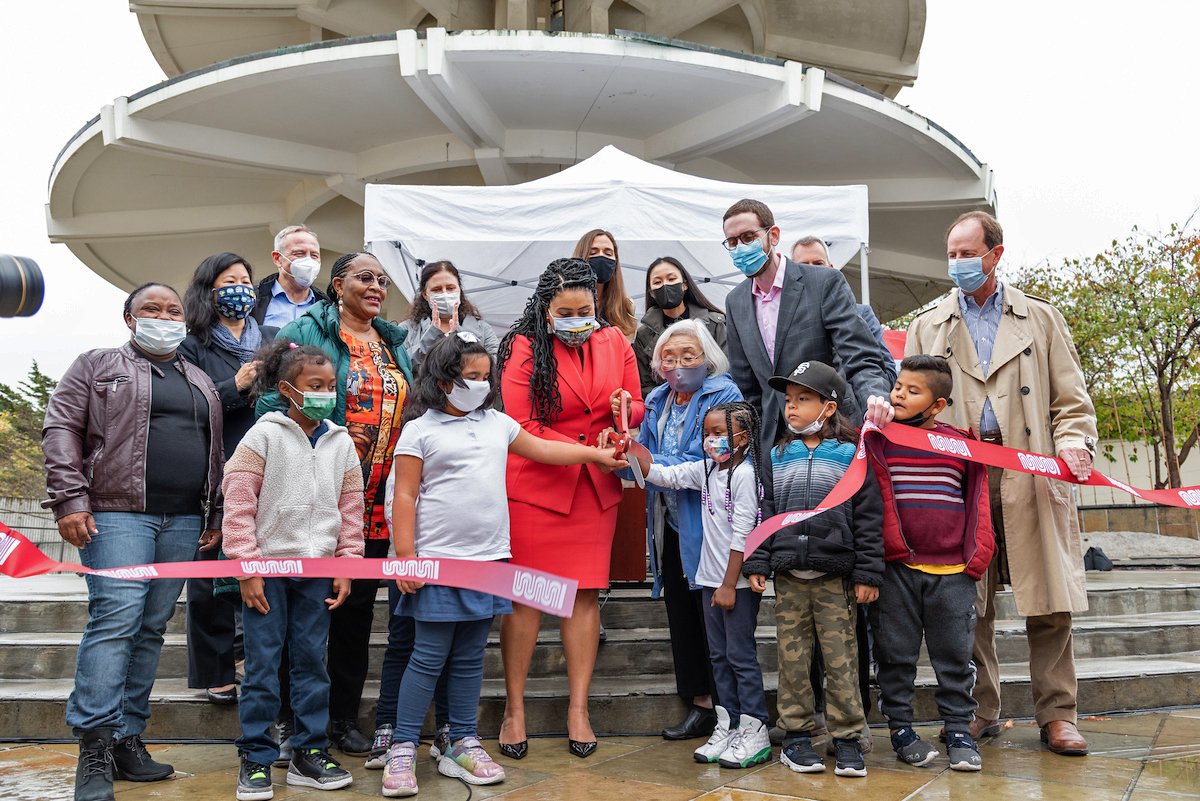 The sky was gloomy but the mood was celebratory at the Japantown Peace Plaza on Wednesday. Fortunately, the rain stopped just long enough for the SFMTA, along with Mayor London Breed and other city departments and community members, to celebrate the completion of the Geary Rapid Project. This major civic improvement project has helped to revitalize one of San Francisco’s busiest corridors between Market and Stanyan streets with more reliable bus service, safer streets, upgraded utilities and new trees.

One safety improvement in particular was a much-anticipated addition for residents of the Fillmore, Japantown and St. Francis Square communities: a new signalized crosswalk at Geary and Buchanan. That and three other new crosswalks in the area are providing safer crossing opportunities for people walking and helping to reconnect neighborhoods that were divided by the Geary Expressway and “urban renewal” in the mid-twentieth century.

Pre-pandemic, the combined Geary routes boasted one of the highest bus riderships in the country, with more than 56,000 daily customers relying on the 38 Geary and 38R Geary Rapid. As riders return, they are experiencing a faster, more reliable ride thanks to transit improvements that were made along the three-mile stretch of Geary.

Dedicated transit lanes, bus stop optimization and signal retiming were implemented at the beginning of the project in late 2018. These quick-build improvements alone resulted in 38R Geary Rapid travel time savings of up to 20%. More recent improvements include coloring the transit lanes red to improve compliance and installing 12 new transit bulb-outs—sidewalk extensions at stops that reduce delays by allowing buses to remain in the travel lane. The Transit Signal Priority system, which helps buses get the green light at intersections more often, has also been upgraded. Now that the full suite of transit improvements has been installed, we’re beginning to assess how well they’re working and will share full evaluation results in 2022. 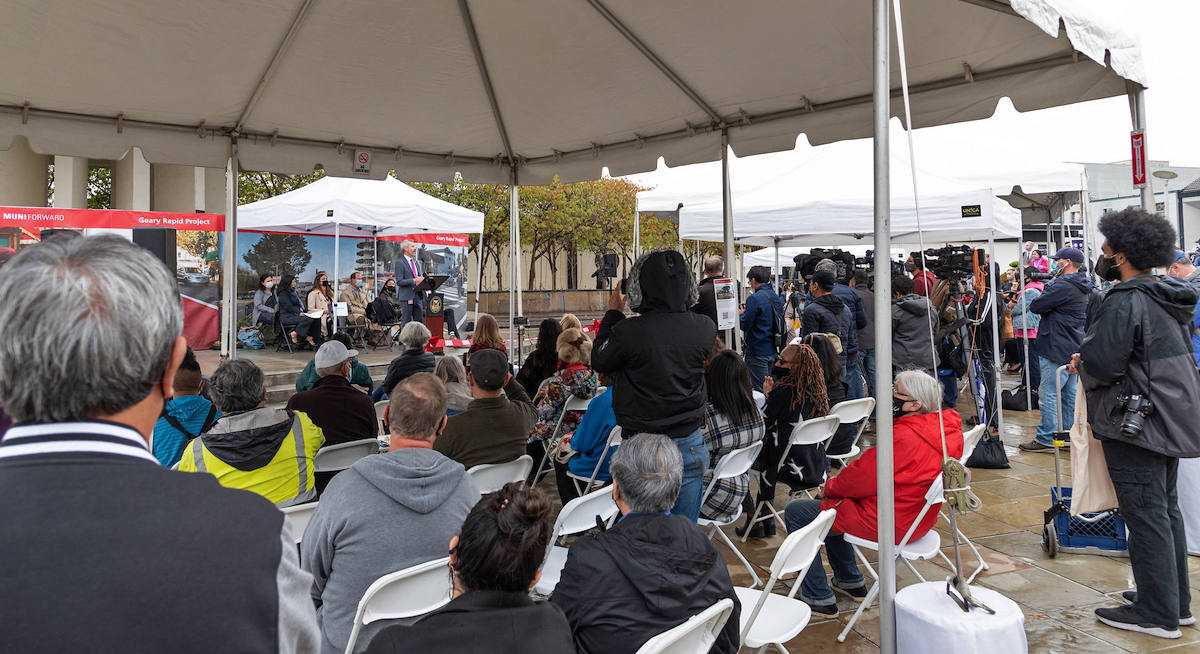 Other upgrades include a host of safety improvements to address Geary’s designation as a high-injury corridor. Thirty-four new pedestrian bulbs-outs were built along the corridor to shorten crossing distances for people walking and slow turning vehicles. Other additions include accessible pedestrian signals, curb ramps, countdown signals and longer crosswalk timing to allow people of all abilities to cross Geary safely. The Tenderloin, where there is a disproportionate number of severe and fatal collisions, was a focal point for many of these improvements.

The Western Addition has also been spruced up with the addition of 31 new trees. The trees, plus visual narrowing of the lanes and reducing the number of travel lanes from eight to six, all work together to give the area more of a neighborhood feel and slow down speeding vehicles who have treated the thoroughfare like a highway.

This three-year capital project was completed on time and on budget. To minimize the need to dig more than once, construction was coordinated with other City agencies, including 1.5 miles of new sewer mains and almost three miles of upgraded water mains by San Francisco Public Utilities Commission (SFPUC). Public Works has rejuvenated 1.5 miles of deteriorated streets between Masonic and Van Ness avenues with fresh paving.

The Geary Rapid Project is the first of two phases of improvements planned as part of the Geary Corridor Bus Rapid Transit (BRT) project. Outreach and preliminary design is currently underway on the second phase, the Geary Boulevard Improvement Project, which would bring similar transit and safety improvements west of Stanyan Street to 34th Avenue.