Our Routes' Roots: History of the 33 Ashbury/18th 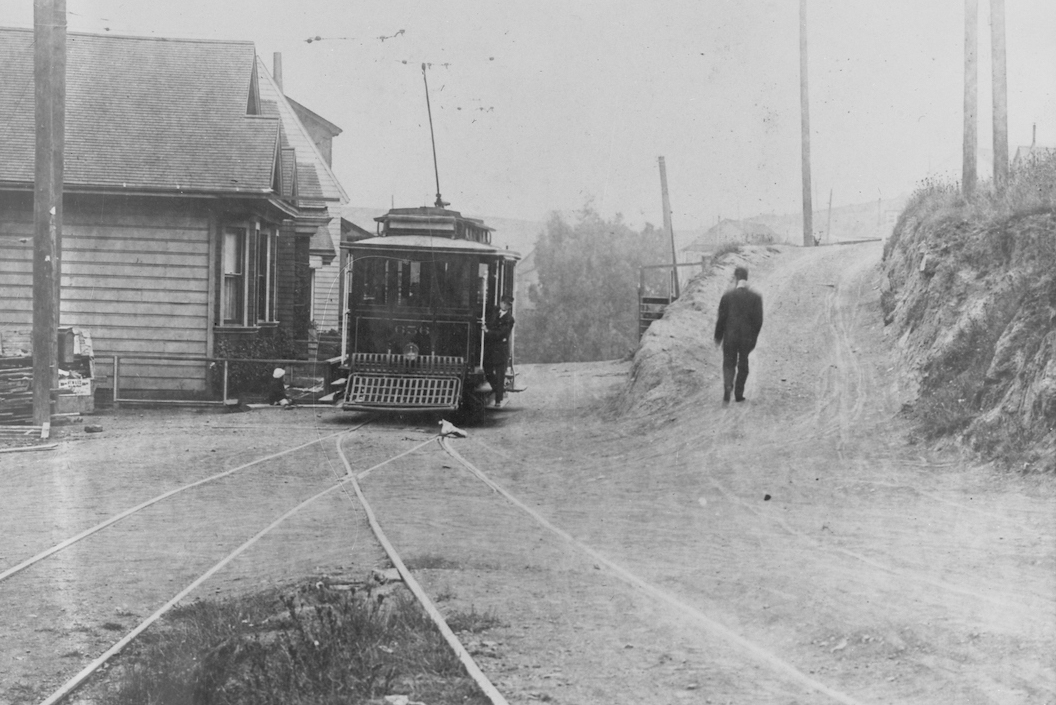 A streetcar on the 18th & Park Line uses the unique "switchback" at Market and Clayton Streets in this 1915 shot.

The exact path of the route has changed over the years but the core of the line's path up Twin Peaks and Clayton Street traces its lineage back to 1892 and the opening of San Francisco's second electric streetcar line. This line, called the 18th and Park, was operated by the San Francisco & San Mateo Electric Railway Company and followed a 5-mile route from 3rd & Harrison Streets to Golden Gate Park via South of Market, the Mission, Twin Peaks, and Ashbury Heights.

A pioneering streetcar line, the 18th & Park opened up efficient crosstown service to compete with the slow moving and crowded cable car lines running towards the Park on Haight, Oak, Hayes, and Fulton Streets. Utilizing a special rail "switchback" at Market and Clayton Streets allowed streetcars to navigate the acute-angled intersection and steep slope of Twin Peaks where conventional curve tracks were not practical. Upon arrival at the intersection, cars would pull into the switchback and change direction to travel up Clayton or down Market. 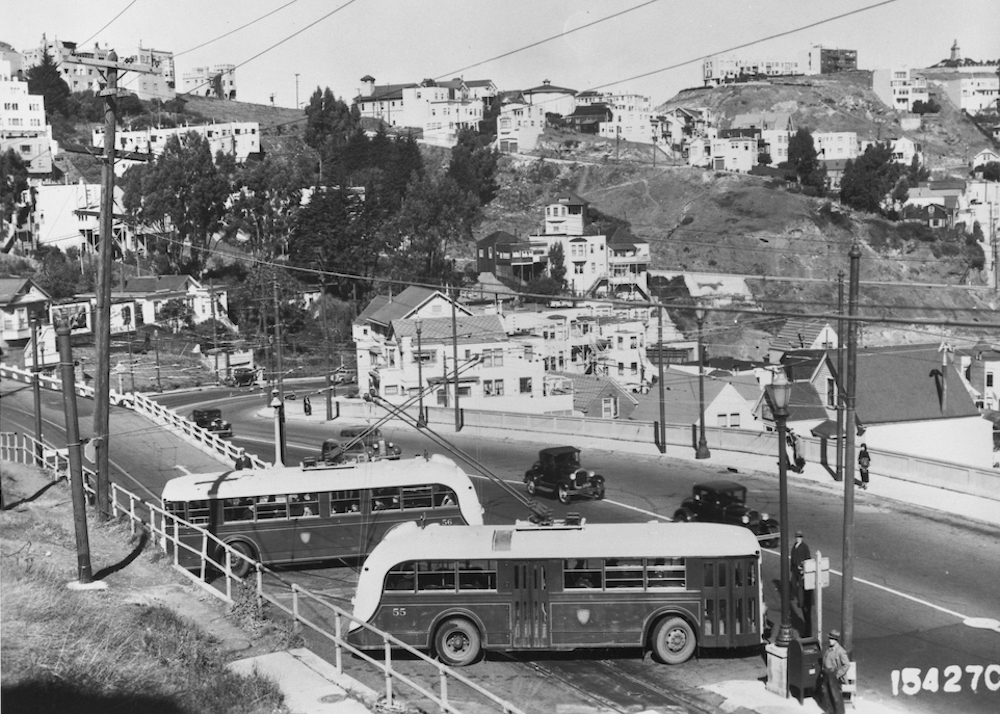 The infamous Market & Clayton switchback is navigated by San Francisco's first generation of trolley buses just 6 days after conversion in this October 12, 1935 shot. Close inspection reveals the streetcar tracks still in place at the bottom of the frame.

By 1935, the 18th & Park Line had been renamed the 33-18th & Park and was being operated by the Market Street Railway Company (MSRy). Following 43 years of streetcar service, the 33 became the city's first electric bus route when MSRy. converted it to use modern "trackless trolleys", or trolley coaches, on October 6, 1935. MSRy. chose to use trolley coaches because they could navigate the Market & Clayton turn more easily than streetcars, had excellent hill-climbing ability, and were cheaper to operate compared to either streetcars or motor buses. 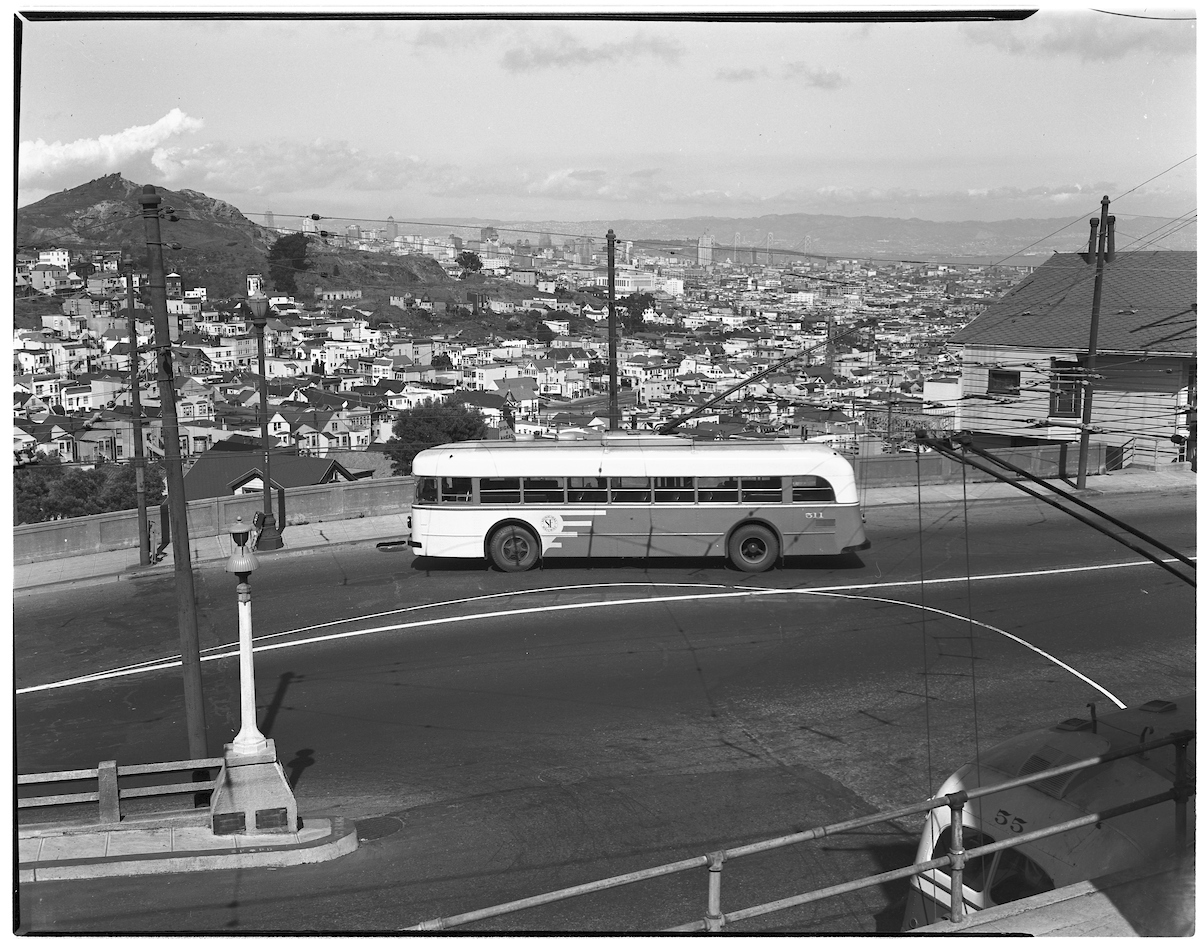 This 1947 photo was taken just three years after Muni assumed operation of the 33. The city's skyline certainly has changed in the 70+ years since this shot was snapped.

In 1944, the 33 became part of Muni after the consolidation of MSRy. and Muni into one city-owned transit system. In just a few short years, the 33 went from being one of two trolley routes in the system to one of many as Muni converted a majority of streetcar lines to electric trolley bus operation. For many years, coaches followed the same route that was established in the 1890s, offering riders a panoramic view of the city from the slopes of Twin Peaks. 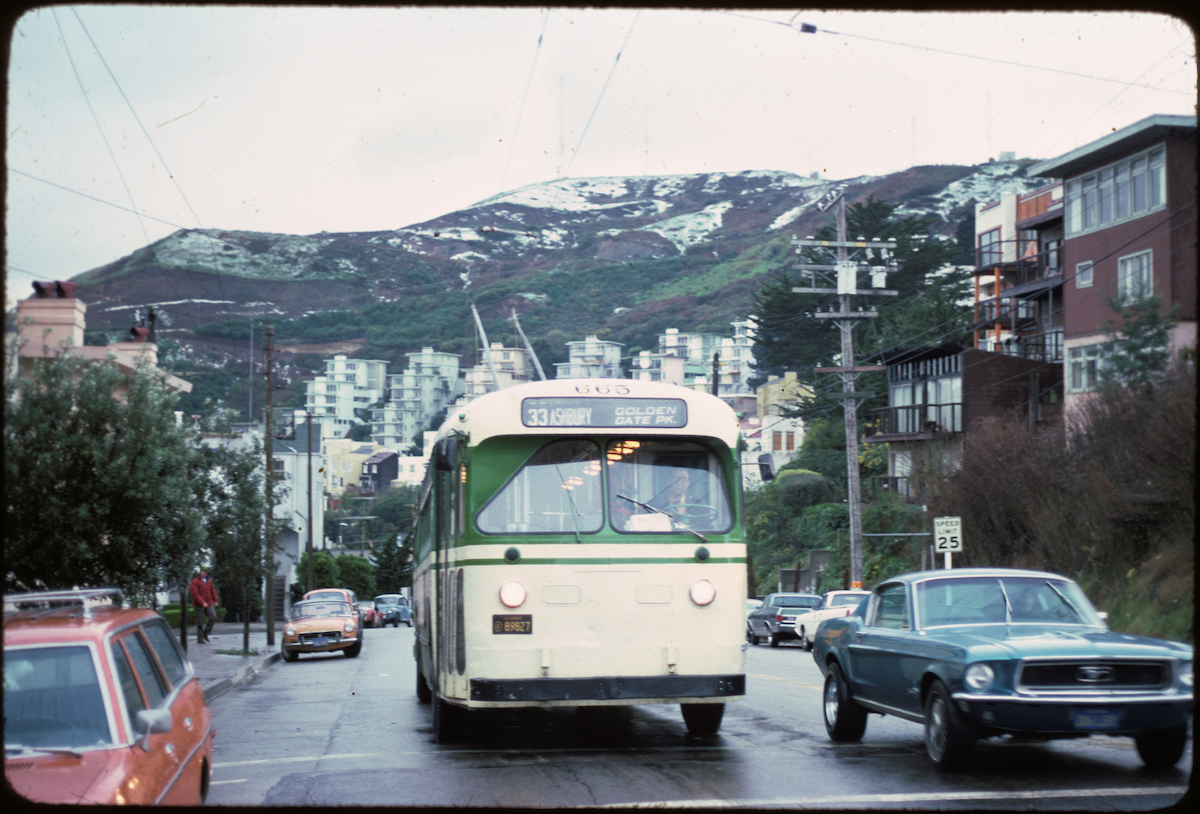 A very rare occurrence is captured in this 1976 color slide-- a dusting of snow atop Twin Peaks as the 33 Ashbury rolls by below.

In the 1980s, the 33 saw its first major change in decades when the line was rerouted to provide better crosstown service from SF General Hospital to the Laurel Heights neighborhood. Today, the 33 is seeing a refresh of the Overhead Contact System, the network of poles and wires that provide electric power to 33 Route buses, through the 33 Ashbury Overhead Wiring and Pole Replacement Project. While the 33 recently celebrated its 84th birthday as a trolley coach route, astute 33 riders will note that service is currently being provided by motor coaches due to ongoing construction along the corridor. 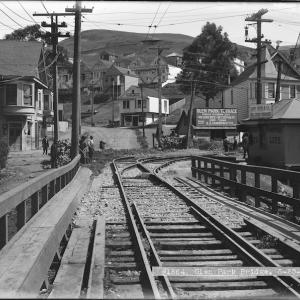 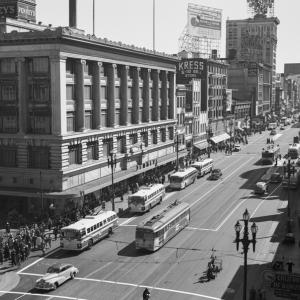 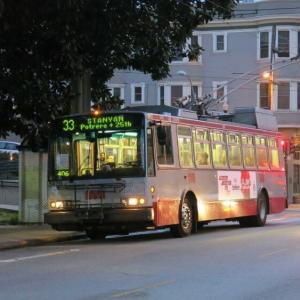