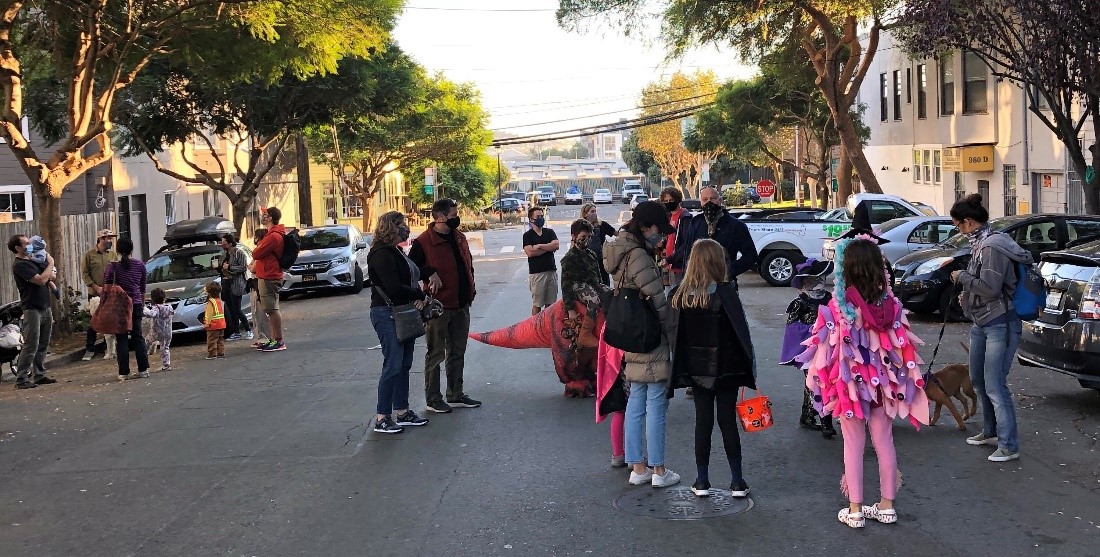 On October 31 from 3 to 6 p.m., organizers from Kid Safe SF and the Great Highway Park Initiative are turning the Great Highway into The Great Hauntway, a beachside block party with a costume contest, arts and crafts and a “spooky disco.” That same day, neighbors in Sunnyside are gathering on Slow Hearst Street for a Halloween party at 4 p.m. On Minnesota Street, the Dogpatch Neighborhood Association is hosting their second annual MinneSLOWta Spooky Slow Street Stroll on October 30—the same day that Slow Sanchez Street will host a Halloween Stroll.

In addition to Spooky Slow Streets, neighborhoods are hosting a variety of creative block parties across the city. In the Bayview, the San Francisco African American Arts and Cultural District is hosting the 3rd Street Harambee Block Party, with a street closure in front of Cafe Envy at Yosemite and Lake streets on October 30. And in the Tenderloin, where SFMTA recently added safety measures including 20 mph speeds district-wide and a number of COVID-19 street transformations, the community is hosting events throughout the weekend. One highlight: Larkin Street—which has been closed to vehicle traffic from Thursdays through Sundays during the pandemic—will transform into a Pumpkin Patch on the 31st complete with pumpkin decorating and trick-or-treating at local businesses. And the Lower Haight Merchants and Neighbors Association is hosting Halloween Hoedown with "slow streets vibes" on Waller Street between Fillmore and Webster on October 30.

Safe, car-light spaces for people to walk, bike and roll are essential every day, but especially on Halloween. Statistically, this holiday that revolves around children being out in the streets, often later in the evening, is the most dangerous day of the year for young pedestrians. To create safer conditions on San Francisco streets for little vampires, ghosts and witches, the SFMTA encourages people to bike, walk or take Muni on Halloween—and for people who do have to drive to use extra caution. Because Outside Lands falls during Halloween weekend this year, the SFMTA is offering expanded, coordinated service between Muni and BART to enable people to opt for transit and keep streets safer.

Slow Streets add an additional layer of safety—which explains their popularity as Halloween gathering places. On Slow Streets corridors, vehicle traffic is designed to be limited to local access and through traffic is discouraged. Just recently, the Slow Streets team released its Evaluation Summary Report containing data on the past year of the program, which was launched initially as an emergency response to the COVID-19 pandemic, but supports SFMTA’s larger Vision Zero goals of ending traffic fatalities on city streets. Around 71% of San Francisco residents surveyed reported that their street became safer after being designated as a Slow Streets street. Programmatic data analysis shows that Slow Streets see a 35% decrease in daily traffic and a 14% decrease in vehicle speeds—along with a 36% decrease, on average, in collisions across the Slow Streets network. As conditions on Slow Streets corridors improved, more and more people--especially kids--felt safe biking and walking along them.

Last Halloween was the first year that neighborhoods had the option to celebrate with Slow Streets—and so many did. We’re thrilled to see the tradition continue this year, and hope everyone has a safe, spooky Halloween!

Hosting or attending a Halloween event on a Slow Street near you? We would love to learn about it and see pictures from the celebration! Get in touch at SlowStreets@SFMTA.com 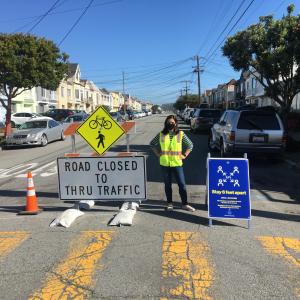 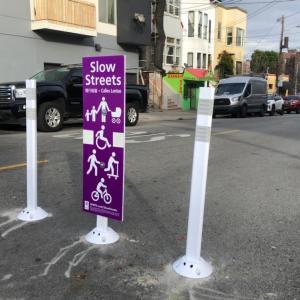