Skip to main content
HeadsUp: The annual #ChineseNewYear Parade starts this evening at 5:30pm from Market & 2nd St. Some #SFMuni reroutes will begin at 10am while others at 2 p.m. Regular svc will resume after roadway is clear (approx. 10pm). For svc details:https://t.co/qNRIndWkgN https://t.co/qs2bn4vliz (More: 25 in last 48 hours)
Subscribe
History In Motion

Tales of the Old Transbay Terminal

This Saturday, Aug. 11, 2018, San Francisco will celebrate the opening of the city's newest regional transit hub, the Salesforce Transit Center, with a free public block party from noon to 4 p.m. This one day event will bring the transit center to life with music, dancing and yoga in the rooftop garden plus vintage buses, history talks and family activities on the bus deck below.

Long before the new multi-level transit gateway was completed, the first Transbay Transit Terminal occupied the same location for more than 70 years. Opened in 1939 to much fanfare, the original facility served as a rail terminal for public transit service to and from the East Bay and beyond for nearly 20 years. During this time, trains traveled across the Bay Bridge on the lower deck of the bridge, with the upper deck reserved for auto traffic. 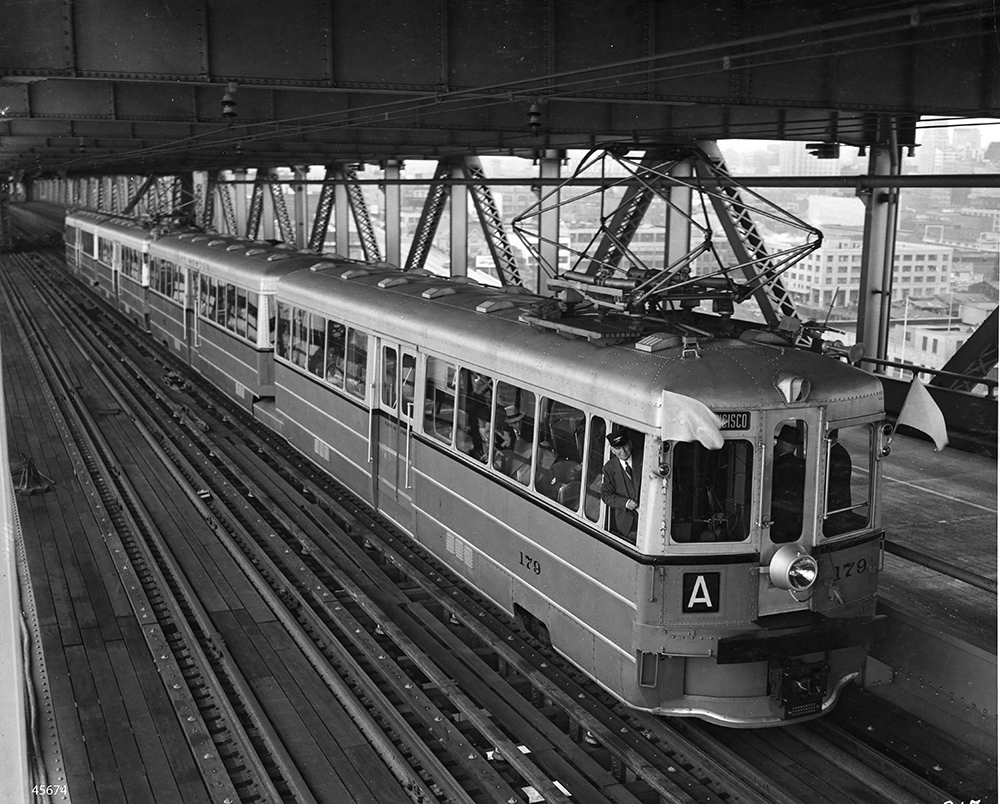 An early test train travels on newly installed tracks on the lower deck of the Bay Bridge in 1938. During the 1940s, three different railways ran between the East Bay and San Francisco via the bridge. Image provided by the Western Railway Museum, Image No. 45674, Sappers Collection, wrm.org.

Transbay rail service reached peak ridership during the World War II years with 26 million passengers annually. Trains from as far away as Chico funneled passengers into the city through the terminal. 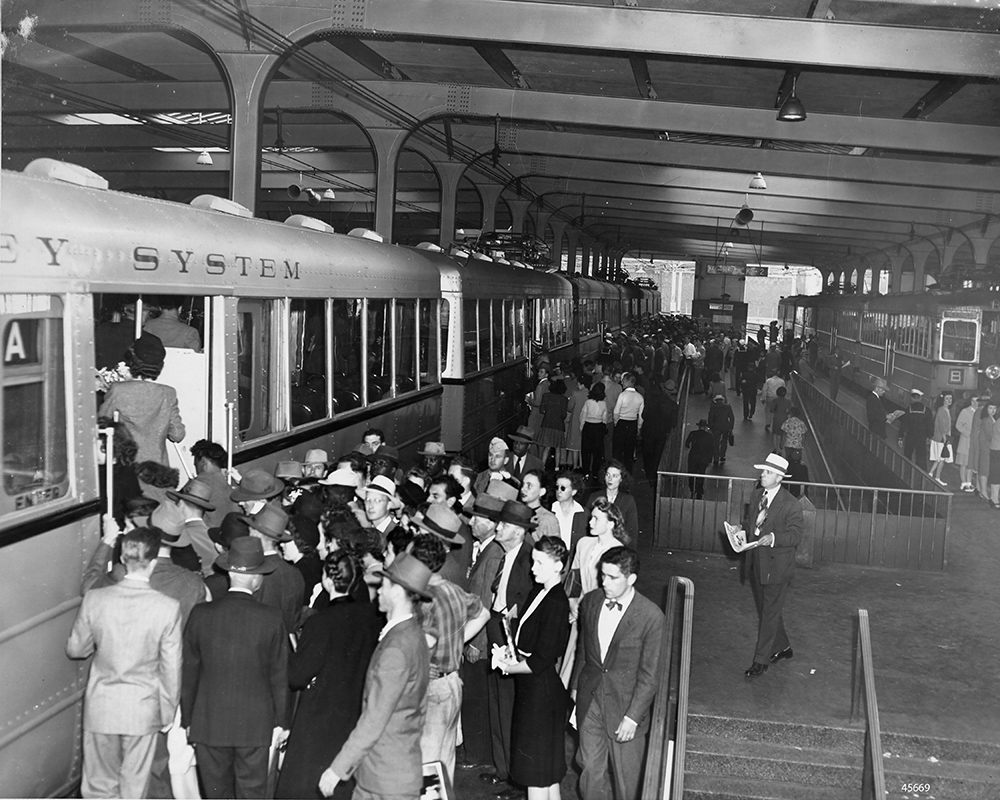 Passengers boarding a Key System “A” line train during rush hour in 1939. The East Bay's AC Transit is descended from the Key System and operates most of today's transbay bus service. Image provided by the Western Railway Museum, Image No. 45669, Sappers Collection, wrm.org.

In front of the terminal at the main entrance on Mission Street between 1st and Fremont streets, San Francisco streetcars picked up and dropped off riders from around the city. Across the street, lunch counters like the San Francisco chain, Fosters, and another café known as “The Commuter” popped up for travelers to grab a quick bite. 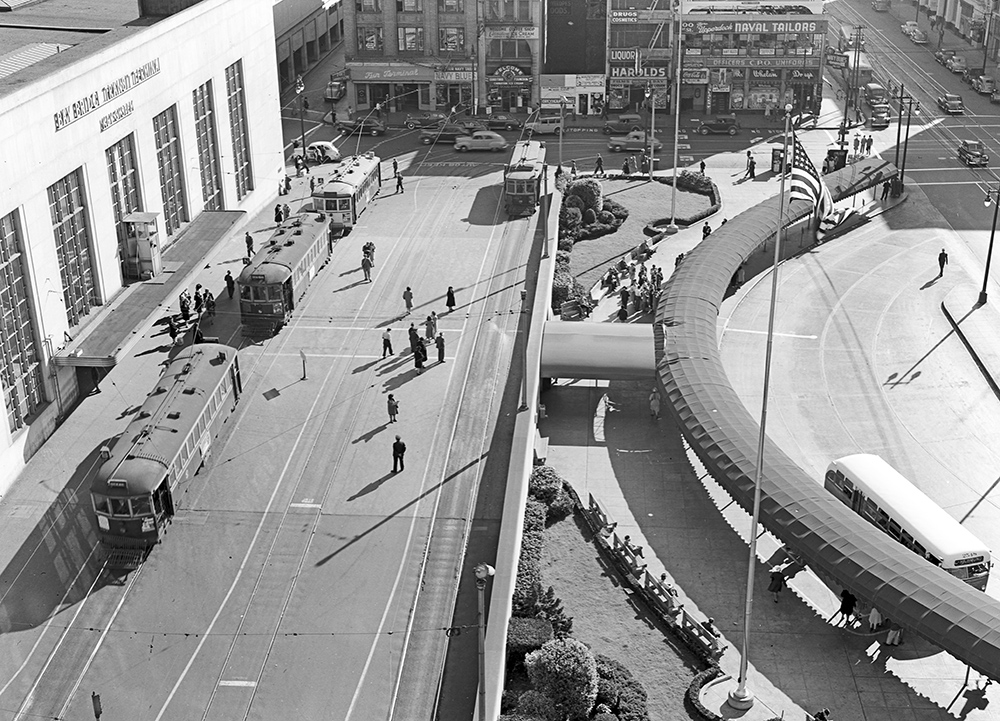 A view of the grand entrance on Mission Street, with Muni streetcars in front of the original Transbay Transit Terminal. The shops across the street include a tailor, a soda fountain, and a corner arcade named the “Fun Terminal.”

In the years after World War II, the rise of commuting by automobile led to decreasing rail ridership, and in 1958 the cross-bay trains were replaced by bus service. Following the removal of the train tracks on the lower deck, cars occupied both decks of the bridge with one-way travel in each direction. This change marked the temporary end of regional rail transit across the San Francisco Bay. 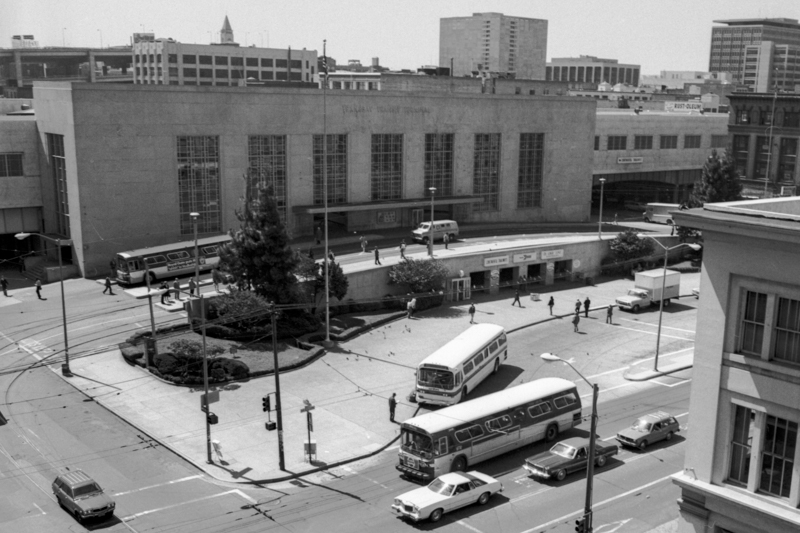 The Transbay Terminal is seen here in 1978, with Muni and SamTrans buses connecting passengers to regional and national bus transportation.

In 1974, BART opened its service across the Bay, restoring rapid rail transit from the East Bay into downtown. With increasing congestion on the bridge, many passengers commuting across the Bay chose the faster route via BART and the Transbay Terminal fell into steep decline.

By 1999, the terminal was worse for the wear and San Francisco voters passed Proposition H, calling for a new or significantly rebuilt transit center to replace it. Just 11 years later, the last bus out of the original terminal departed on August 7th, 2010, and the monolithic Art Moderne building was torn down a few months later.

Join us this Saturday, almost 8 years to the day, as the new terminal opens its doors for public service. We'll be hosting a pop-up history exhibit, talks, and a walking tour, plus a variety of vintage buses from AC Transit and Muni, all on the 3rd floor bus deck! 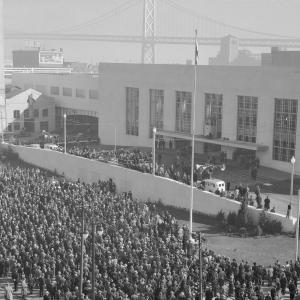 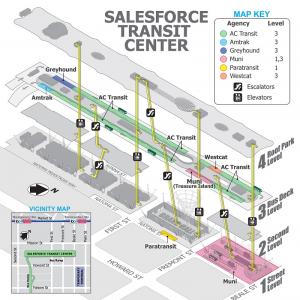