Extending transit and safety benefits to the western Geary corridor

The SFMTA has been working to improve bus performance and pedestrian safety through the Geary Rapid Project on the eastern Geary corridor and the 38 Geary Transit Lanes in parts of the Richmond. The Geary Boulevard Improvement Project aims to extend these improvements into the Richmond District by adding new side-running transit lanes and colorizing them red, optimizing bus stop locations and constructing bus bulbs at 38R Geary Rapid stops. Learn more below about how these changes all work together to provide a faster ride and a safer corridor. 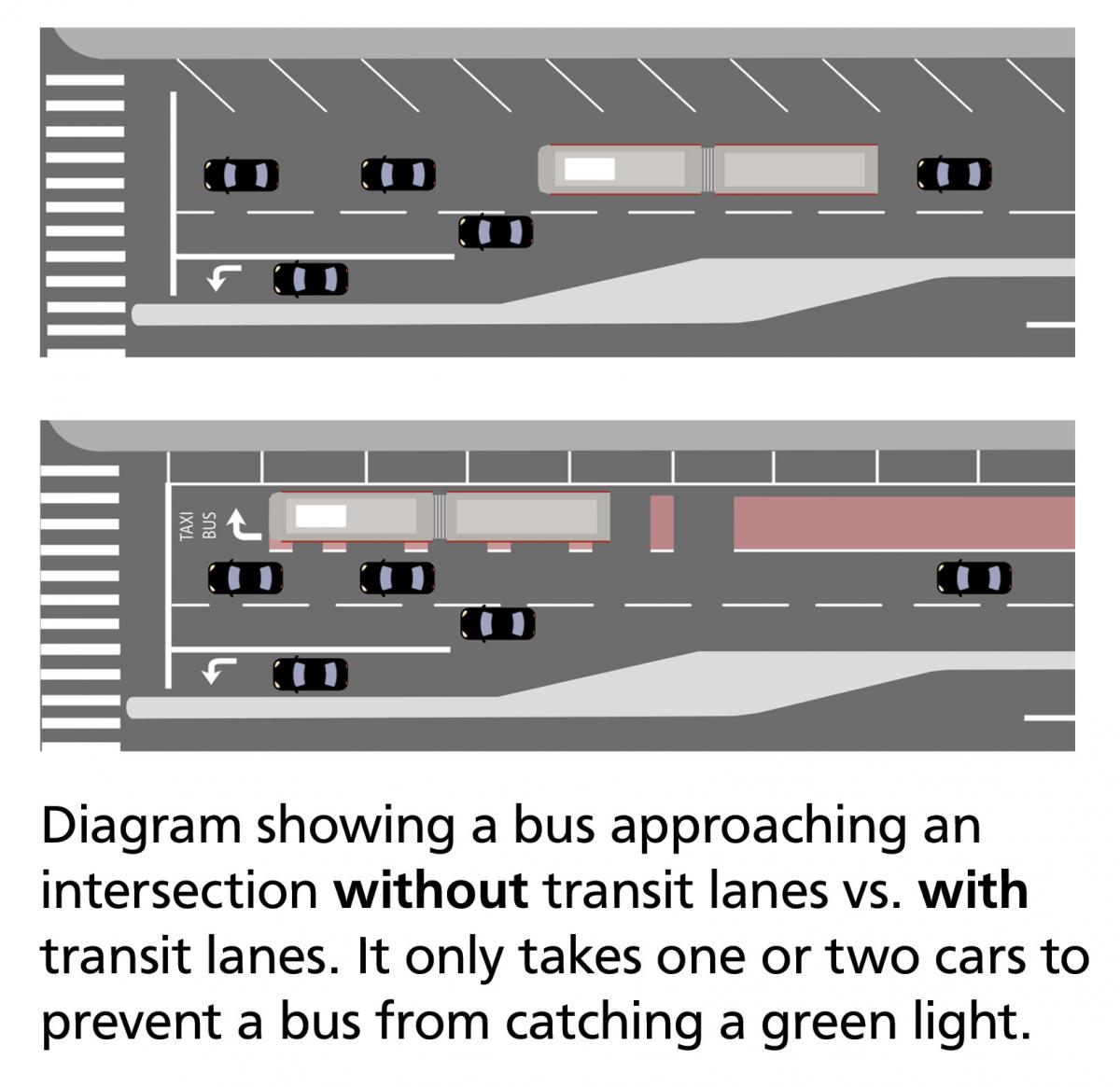 Transit lanes protect buses from getting delayed by traffic, and coloring the lanes red has shown to improve compliance by as much as 50%. Transit lanes also help buses get to the front of an intersection, which means they can take advantage of transit signal priority and spend less time stuck at red lights—even when traffic is lighter.

Transit lanes work best when they are uninterrupted by gaps. If the project is implemented as designed, 38 Geary riders will benefit from near continuous red transit lanes from 33rd Avenue to the SF Transit Center downtown.

Moving stops from the near-side to the far-side of the intersection (past the traffic signal) helps buses take advantage of transit signal priority, which makes them more likely to catch a green light. It also reduces conflicts with vehicles turning right. See a map of proposed bus stop changes on Geary.

Bus bulbs are sidewalk extensions which allow the bus to pull up directly to the bus stop without leaving the transit lane. Making stops in the transit lane reduces the time it takes to pull into a stop and wait for traffic to clear before re-entering the lane. Along with dedicated transit lanes and signal optimization, these improvements all work together to make your 38 Geary bus trip faster and more reliable.

If the project is implemented as proposed, the bus travel time savings can really add up for riders. A 38 Geary rider traveling along the full project area during commute hours would save about 5.5 minutes per day, or 22.7 hours of time saved per year.

All time savings are calculated for riders traveling roundtrip between 33rd Avenue and Stanyan Street during rush hour. For a 38R Rapid rider traveling during rush hour, the savings would be: 4.3 minutes per day and 17.8 hours per year.

Aligning street space with how the corridor is used

Over one third of people travel on Geary by bus, yet only 3% of the street is currently dedicated to transit between 15th and 25th avenues. If implemented, the project would better align the street space with how it’s used. The number of 38 Geary riders is only expected to increase with housing and population growth in the Richmond and across the city.

On average, one person walking within the Geary Boulevard Improvement Project area is injured in a traffic collision each month. Comprehensive pedestrian safety features include 23 pedestrian bulb-outs, 39 enhanced median refuges, elimination of 11 unprotected left turns, daylighting (red paint at intersection corners), and retimed signals that give people walking more time to cross the street and a head start before vehicles.

Improvements for people driving could include upgrading traffic signals with new mast arms and larger signal heads that are easier to see. Additionally, in places where dedicated transit lanes have been installed, studies have shown significant reductions in Muni-involved collisions—including on the eastern side of the Geary corridor, where the collision rate decreased by two-thirds after the Geary Rapid Project was implemented and is now about half that of the citywide Muni bus collision rate.

Private vehicles are among the largest contributors to greenhouse gases. When more people chose to take transit instead of driving because buses are quick and reliable, the benefits to the environment can be enormous. 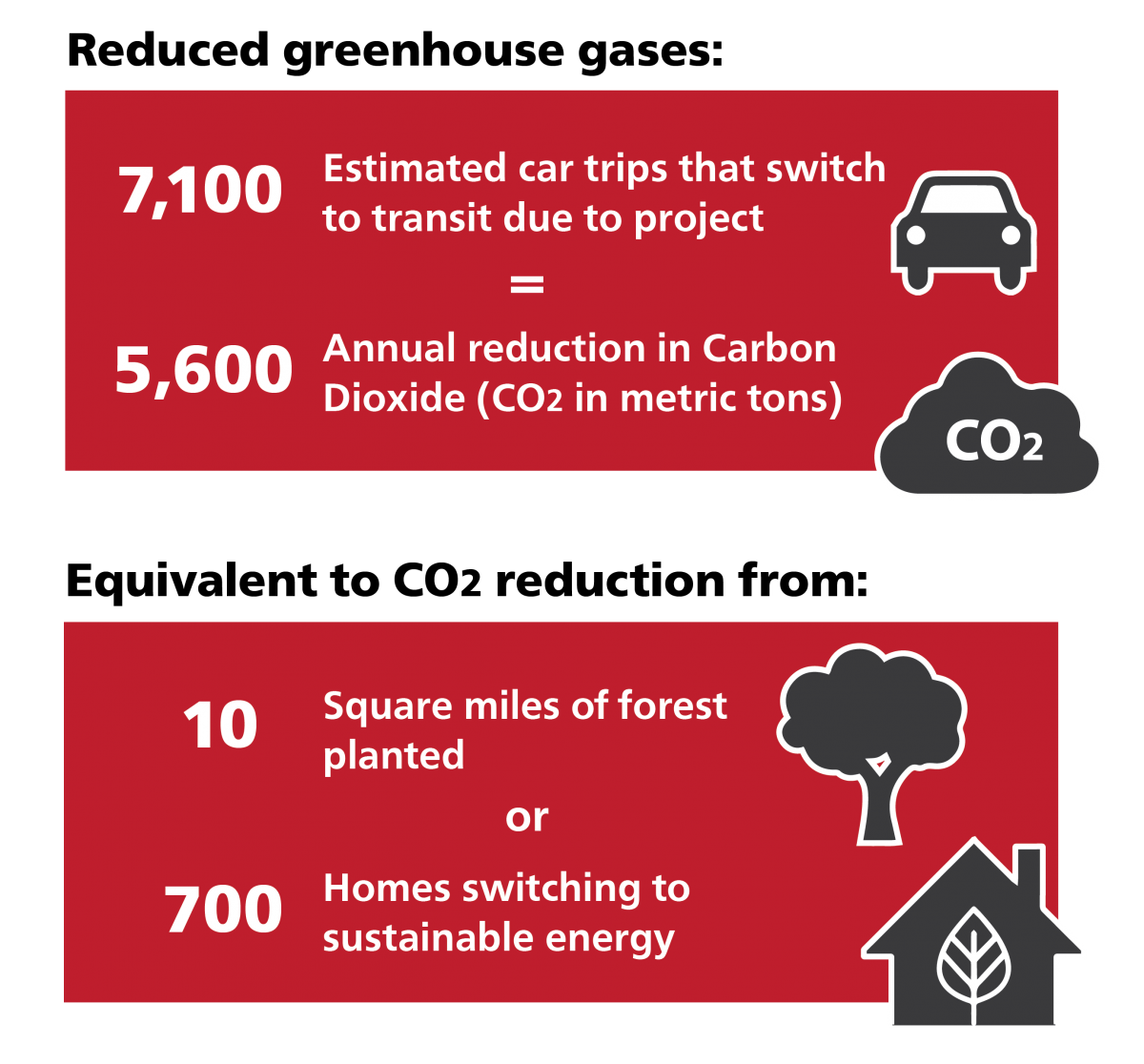